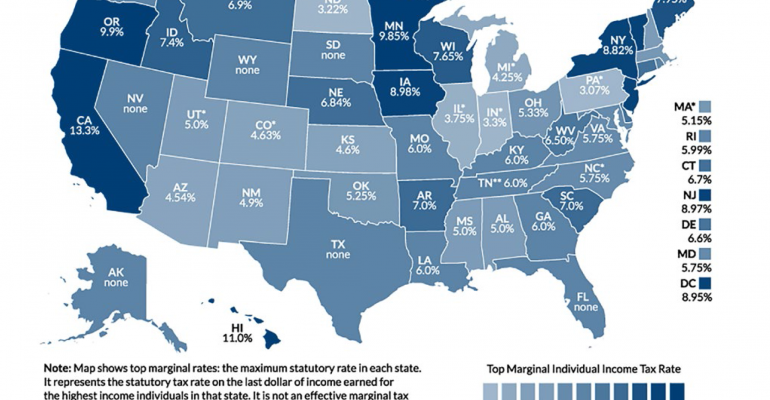 State Taxes Can Add Up

Where do your clients live?

Taxes are a growing concern among clients, particular high-net-worth individuals. A great deal of ink has been spilled recently discussing clients’ increased awareness of the federal taxes; however, they also have become more sensitive to the state taxes that they may pay over time.

Each state maintains its own tax laws to collect income or estate (or inheritance) tax. These different laws may have a significant impact on a taxpayer’s decision to relocate during retirement.

As the “baby boom” generation retires, wealth preservation discussions increasingly involve decisions to relocate to another state. A retiree may enjoy nicer weather or a change of scenery, but he or she may enjoy some beneficial tax savings as well.

Income tax rates vary widely from state to state. Some do not tax income at all (such as Florida, Nevada, South Dakota, Texas, Washington and Wyoming). Other states have tax rates that approach or exceed 10 percent. Some municipalities within states even maintain additional, regional income taxes.

Within the states that do not tax retirement income, some distinguish among social security benefits, public and private pensions benefits and retirement account distributions when determining exemptions and taxes.

It’s a complicated patchwork of jurisdictions and rules, but the accompanying illustration can provide some more clarity.

Prior to June of 2001, most states collected estate taxes based on the federal state death tax credit. In other words, they would collect one dollar of estate tax for each dollar of credit allowed on a federal estate tax return.

Speaking in the broadest terms, there are a couple of options that taxpayers consider when relocating during retirement. Some taxpayers sell their home and relocate to another state. Others purchase another home and share time between their primary and seasonal homes.

The problem with the latter approach usually revolves around two concerns. First, states often define residency differently for tax purposes. Second, the state a taxpayer has left usually will miss those taxpayer dollars (and may still try to collect them if possible).

Many states that are losing tax dollars have increased their audit practices, especially in cases where taxpayers retain some connection to their state. These states may not simply accept a round trip plane ticket to bookmark the dates a taxpayer claims to be absent from that state. They now may review a long list of facts and circumstances to demonstrate a taxpayer’s true intent to make a new home a permanent residence.

Taxpayers must plan carefully when moving from one state to another while retaining more than one home. For this purpose, it’s not only important for a taxpayer to prove he or she has arrived in a new home state; it’s also important for that taxpayer to demonstrate a formal departure from the prior home state. This burden could prove difficult when the taxpayer maintains a home and other ties to the former state for family or social reasons.

Failure to plan properly could result in paying more state income taxes than intended. This situation could arise not only because states collect taxes at different rates but also because states don’t necessarily offer credits for taxes paid to another state. In other words, income taxes could be due in more than one state. And, these costs could be surprising and significant.