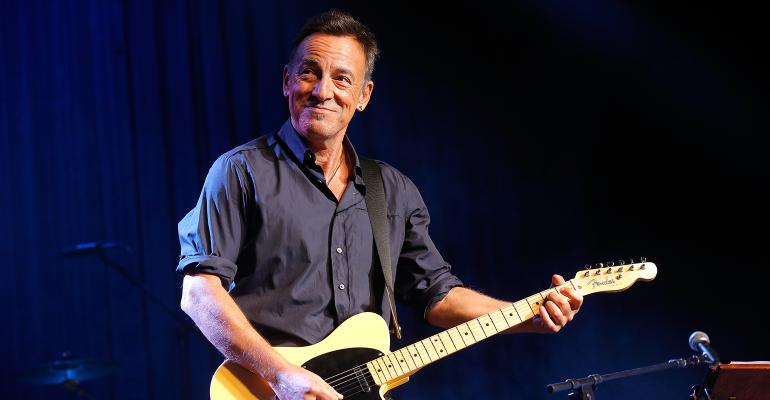 (Bloomberg) --We ain’t in Asbury Park anymore: prime tickets to "Springsteen on Broadway" are now going for as much as $10,000 on StubHub.

Sure, those $2.50 tickets, circa “Rosalita,” disappeared in the ’70s. But The Boss’s run at Broadway’s Walter Kerr Theater is just the latest example of how today’s ticket resellers, AKA scalpers, help drive prices to you’ve-got-to-be-joking levels.

No wonder Wall Streeters want in on this action. Tickets, whether to Bruce, Adele or “Hamilton,” seem like a sure thing -- as safe and liquid as T-bills, only a lot more lucrative. Talk about price inelasticity. And the business is huge: an estimated $15 billion a year.

That, anyway, is the thinking. Because now a few big-money types, including Paul Tudor Jones and Michael Dell, were allegedly snookered like out-of-towners in Times Square.

The pitch is an old one. The supposed fraudsters typically tell their marks they have the inside track on an investment, in this case, hot tickets. The marks hand over money and -- poof! -- it’s gone.

Carton got Doug Pardon, an important partner at hedge fund Brigade Capital Management LP, to persuade colleagues to lend $10 million to Carton’s ticket resale business. The firm, which had invested in the privately held Vivid Seats LLC, reasoned Carton had the connections needed to buy blocks of tickets cheaply for resale, according to a person with knowledge of the matter. But Carton used some of Brigade’s money to pay off his gambling debts, prosecutors said.

Carton has pleaded not guilty and vigorously denied the allegations. Brigade and Pardon declined to comment.

It’s not the first time supposedly sophisticated investors have been lured in with promises of lofty returns and celebrity connections. Money managers are particularly susceptible nowadays as they prowl for investments in a low-interest-rate world.

The cases highlight the dark underside of the largely unregulated resale business. While fans complain that tickets are scarce and expensive on popular sites like StubHub, TicketIQ and SeatGeek, the potential for investor fraud lies more on the broker side of the industry, where money is raised from investors to finance ticket purchases.

"Because of what’s happened in the last six months, if you’re a hedge fund and you’re investing in ticket brokers, shame on you," said Jesse Lawrence, founder of resale marketplace TicketIQ. "Just don’t do it, unless you can 100 percent verify how they’re getting tickets."

The Carton case and two other high-profile ticket fiascos pulled back the curtain.

A concert promoter and Hamptons socialite, Joseph Meli, allegedly cheated more than 125 investors, including billionaires Dell and Tudor Jones, in a scheme centered on tickets to “Hamilton” and popular concerts, prosecutors said.

And a former New York City math teacher, Jason Nissen, after running a well-respected broker company, was accused of falsely telling investors, including Falcon Strategic Partners and a Hutton Capital Management-affiliated firm, he’d use their money to buy tickets to sought-after events including the Super Bowl and “Hamilton.” Actually, he was repaying earlier investors, according to the government.

Meli and Nissen pleaded not guilty. Meli’s lawyer said during the arraignment that the charges weren’t true. Nissen’s lawyer declined to comment.

Ticket brokers typically buy up blocks of seats -- often employing blinking quick bots and then reselling them through their own channels, as well as on the familiar websites.

Bruce Springsteen and Taylor Swift are among artists trying to beat the bots, teaming up with TicketMaster on a Verified Fan program, which limits ticket sales to fans who’ve been vetted to confirm they’re real people and not scalpers. Though demand is high, fewer than 5 percent of the Springsteen Broadway tickets have hit the resale market, according to TicketIQ. Hamilton shows, at the height of their fervor, often had upwards of 45 percent of seats sell through the secondary market.

Swift is taking it a step further. In her version of Verified Fan, she’s cashing in by giving priority to fans who spend money on her music and products. Springsteen didn’t ask fans to buy any Boss-branded gear.

New York Attorney General Eric Schneiderman, who recently finished a three-year investigation of the industry, is also cracking down on the bot runners. Earlier this year, he got six companies to pay $4.2 million in settlements for violating New York ticket laws by using bots to scoop up thousands of tickets.

More than anything, the ticket business in general is plagued by a raft of problems, including under-the-table agreements and computer algos that swallow quantities of tickets.

Even a hint of celebrity can be a powerful allure.

One wealthy individual, who spoke on a condition of anonymity, invested in Meli’s ticket scheme for a brief time after attending a party where he saw Mick Jagger’s manager give Meli a hug.

Fans, of course, are the biggest losers. But the new economics of tickets are also hurting another camp, albeit one fans already love to hate: old-fashioned scalpers.

“It ain’t the same no more,” said Terry Smith, who was trying to sell Mets tickets outside Citi Field on a recent Saturday night. “We ain’t making money like we used to.”

Rest assured, others are -- and then some.