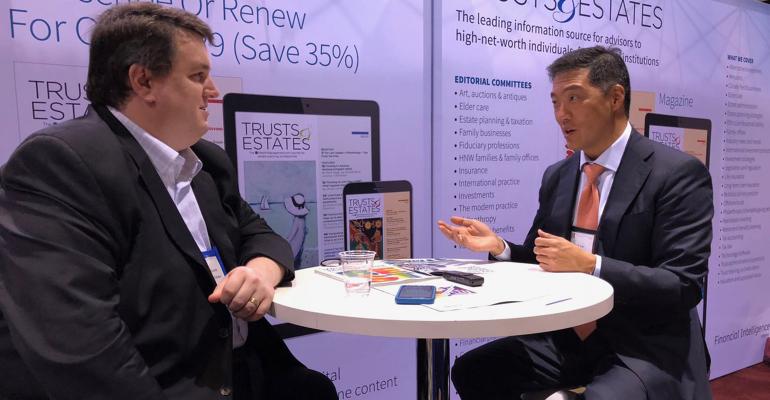 Securities, Basis and Debt... Oh My!

A chat with Paul Lee about how advisors can leverage the mutability of the bases of public securities.

Paul S. Lee, a senior Vice President at Northern Trust, is usually the smartest guy in the room. This fact is made even more impressive when the room in question is at the annual Heckerling Institute on Estate Planning in Orlando, and is packed to the brim with the brightest minds in the estate-planning world.

Lee has been leading the basis planning charge for years – emphasizing the value of leveraging high exemptions to take advantage of the “free” step up in tax basis at death for assets in an estate, as opposed to planning simply to minimize estate tax - long before the recent Tax Cuts and Jobs Act put gift and estate tax exemptions through the roof. I was able to catch up with him for a few minutes at the Wealth Management booth to talk taxes, basis and what the industry may look like going forward.

WealthManagement: Basis planning is the phrase on everyone’s lips in the wake of the new tax act. What has changed?

Paul Lee: The exemption equivalent. Ever since the previous $5 million exemption was made "permanent" under the ATRA in 2012, mathematically under the current state of the rules there’s no reason to use the exemption equivalent unless you really need to. It used to be that the first step in any sophisticated estate plan was: burn up the exemption immediately then we’ll try to move assets. That’s no longer necessarily the case... With the recent doubling of the exemption under the new Tax Act, whether to use or save the exemption will be determined on whether this doubling will be permanent and how the clawback provision is ultimately written.

WM: What are some important keys that advisors should know about basis planning going forward?

PL: Let’s take your standard financial advisor that’s working primarily in publicly traded securities. One of the more provocative things I’ll speak about at my session later are how you can actually do basis planning with such securities. Most people think of the tax basis or the cost basis of a public security as a historical number. It’s either the original cost or the value when someone died with it, etc. The sort of basis stripping and shifting that I speak about actually also works in the publicly traded securities arenas.

Let me give you an example. Exchange funds primarily use the partnership rules to effectively do a basis strip and shift. Typical exchange funds, you put in a bunch of highly appreciated securities, you wait seven years, and at the end of that period you can take out your interest, whatever that value may be, and what they give you is a smattering of the old securities that were put in there at the beginning and have been sitting there for seven years. That’s exactly the same thing that happens in the estate-planning version, but by a different name.

WM: When could an advisor consider these techniques?

PL: One of the examples I use in my presentation basically asks: “How do I use this whole idea to diversify a concentrated stock position?” The unicorn of every advisor’ world. If that security has been sitting in a partnership for seven years or more, it qualifies as a qualified investment company partnership that basically will allow you to treat the distribution of the security as property, rather than cash. If you have $100 of a security with 0 basis, you can borrow $100 from a bank, buy a diversified portfolio, have $100 of basis in that portfolio, and then distribute out the diversified portfolio to the partnership, strip the basis and move it over to the concentrated position, allowing you to sell the $100 stock without realizing any gain. Effectively, what have you done? You’ve exchanged the concentrated position for a diversified portfolio. It’s exactly the same set of rules, it just uses debt in a slightly different way that most exchange funds don’t. How mutable and changeable the bases of securities are is really interesting.

For your typical financial advisor, what I would say is keep their eye on the ball. Even with publicly traded securities with a decent amount of basis, if it’s appreciated in some way, think very carefully whether you should be selling it or, instead, somehow figuring out a way to continue to hold onto it, get a basis adjustment at death, possibly for no cost, and attempt to get liquidity out of it – borrowing is typically one of the easiest things to do against securities. You’ve got Regulation T requirements, but you still may be able to borrow in part collateralizing the security and maybe other assets. I think the whole idea of using debt today instead of having a taxable event is going to be pretty interesting.

WM: How has the Tax Cuts and Jobs Act impacted all of this?

PL: I don’t really know of any particular changes that really affected anything other than this doubling, maybe temporary, of the exemption equivalent and putting on it’s head “do you attempt to use this exemption or save it?” which mathematically you’re supposed to want to save it and keep it so it can be a free step up.

I was a little afraid and hoping that the FIFO accounting rules would come in to publically traded securities for individuals. If that had come in, then this basis shifting and stripping idea would actually have even more applicability. AKA can I take the basis from the new stuff and put it on the old stuff, thereby when the FIFO accounting rule kicked in, I’d be selling the ones with basis as opposed to those without. I say I worried, because that simply may have been too provocative of a thing to be able to do.