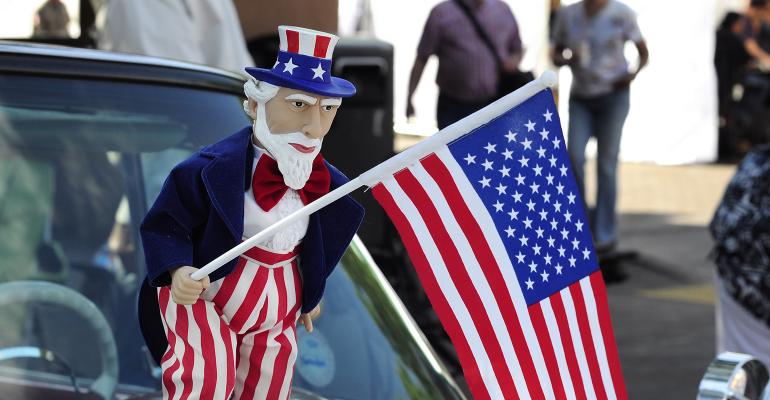 Privatize health care and run a big deficit and your country, too, can have low taxes.

(Bloomberg Opinion) -- The latest tax numbers are out from the Organization for Economic Cooperation and Development, and they show that U.S. taxes in 2018 were again among the lowest of any affluent democracy. In fact, thanks to the tax cuts that took effect at the beginning of 2018, U.S. tax revenue as a percentage of gross domestic product fell from 31st place (among 35 OECD members) in 2017 to 33rd (among 36) in 2018.

These rankings are somewhat padded with a lot of very small countries with very high taxes, but U.S. taxes — at 24.3% of GDP in 2018, down from 26.8% the year before — are now also a lot lower than those of any other large OECD economy. They are also about about as high as they were in the late 1960s, while taxes have risen significantly since then pretty much everywhere else.

I’ll leave it to you to determine whether the low U.S. tax burden is a badge of pride or shame. It hasn’t brought wildly different economic results: U.S. per-capita real GDP has risen slightly less since 1970 than that of Japan, Germany and the U.K., and slightly more than that of Canada and France.

A more interesting question may be whether U.S. taxpayers really do have it as easy as the OECD numbers indicate.

I started writing about these tax rankings three years ago because they provided such a striking counterpoint to then-President-elect Donald Trump’s repeated claims that U.S. was “the highest taxed nation in the world.” Before 2018, the U.S. did have one of the highest top corporate income tax rates in the world, which is perhaps where President Trump got the notion. But due to loopholes, actual corporate taxes paid were lower as a percentage of GDP in the U.S. than the OECD average (in 2018 they fell to second-lowest, ahead of only Latvia), and the overall U.S. tax burden was, as already noted, quite low by wealthy-nation standards, and has fallen lower since.

Still, as I’ve learned from reader emails and other sources over the last three years, there are some comparability issues. One has to do with state and local taxes. Those are included in the OECD’s calculations, but where the U.S. is concerned, the nation’s overall percentage masks a lot of state-by-state and even city-by-city variation. The Tax Foundation hasn’t done its state-and-local tax burden calculations in a while, but in 2012 they ranged from 6.5% of state GDP in Alaska to 12.7% in New York. Another complicating factor is tax expenditures, those grants of benefits and sometimes outright cash via the tax code that can muddy international comparisons. Big U.S. tax expenditures include the deductibility of employer health-insurance premiums, retirement-plan contributions, mortgage interest payments and charitable giving. A 2009 OECD survey found that U.S. income tax expenditures trailed those of the U.K. as a percentage of GDP, and were similar to Canada’s, but were more than five percentage points higher than Germany’s.

Then there’s health care. The U.S. spent 16.9% of its GDP on health care in 2018, compared with an OECD average of 8.8%. About half of that spending in the U.S. is financed by general government revenue and social insurance premiums, compared with 78.5% in 2017 for the other OECD countries for which data are available, while 34.4% of health-care financing in the U.S. and 2.3% in the rest of the OECD came from compulsory premiums paid to private insurers. These premiums aren’t counted as tax revenue, but they can sure feel like a tax — and a perversely regressive one that hits middle-income Americans the hardest, as economists Emmanuel Saez and Gabriel Zucman have argued.

Finally, while U.S. tax revenue as a share of GDP is quite low by OECD standards, U.S. government spending is somewhat closer to the middle of the pack. The U.S. manages to get by with a lower tax burden than other rich countries partly by asking less of government, partly by masking some of its spending as tax breaks, partly by shunting government-mandated spending to the private sector — and partly through the simple mechanism of spending a lot more money than it takes in. According to the OECD the U.S. general government deficit, which counts state and local spending and revenue as well as federal, was 6.6% of GDP in 2018, far higher than that of any other wealthy country.

I’m aware that there’s been a lot of rethinking in recent years of the economic impact of government deficits, but this still implies that while current U.S. taxes are quite low by international standards, future taxes will be less so.

To contact the author of this story:
Justin Fox at justinfox@bloomberg.net

To contact the editor responsible for this story:
Sarah Green Carmichael at sgreencarmic@bloomberg.net