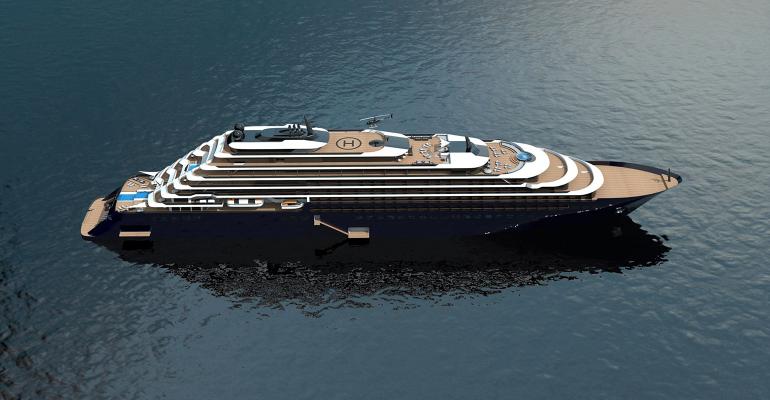 The Ritz-Carlton Yacht Collection, will set sail in 2019—disrupting two industries in one fell swoop.

(Bloomberg) --Want to cash in your SPG and Marriott points for a yacht cruise? That may soon be possible, as Ritz-Carlton, Marriott International Inc.'s flagship luxury brand, announced a seafaring expansion Thursday.

As part of the newly minted Ritz-Carlton Yacht Collection, the five-star hotel brand will launch three small, ultra-luxury ships with laid-back itineraries and spacious, open-concept design schemes that flip the traditional cruise experience on its head. The maiden vessel will pull out of the shipyard late in 2019, with bookings opening next May—marking the first time that a hotel company hits the high seas.

“You have to diversify your business,” Ritz-Carlton Chief Executive Hervé Humler told Bloomberg during an exclusive preview. After successful expansions into branded residences and six-star resorts (which Ritz-Carlton operates under its ultra-premium Reserve emblem), Humler says there were ample data to support a cruise venture. One key statistic, he says, is that the cruise sector has expanded by an average of 8.5 percent each year since 1981. For all that rise in demand, there have been few new ships on the ultra-premium spectrum.

This, combined with company-supplied data claiming that 400,000 Ritz-Carlton guests are cruisers, means there’s both a built-in customer base and a solid marketing opportunity at play. “We only need 12,000 passengers to fill up a ship [each year], so if we don’t exceed [capacity], we’ll be pretty close to it.”

So how will Humler compete with established ultra-luxury players such as Crystal Cruises, Seabourn, Silversea, and Regent Seven Seas? By building the anti-cruise ship, he says—with an emphasis on space, privacy, and flexibility—something he’s worked to perfect over the course of 12 years.

Fredrik Johansson, owner and executive project director of Tillberg Design of Sweden, has designed quite a few ships: Viking, Norwegian, Azamara, Costa, Cunard … the list goes on. But the Ritz-Carlton project represents the first time he’s designing a cruise line’s maiden ship and creating design standards from scratch, “a groundbreaking opportunity,” he says. “We’re designing these ships to turn heads.”

To that end, he drew inspiration from superyachts such as Azzam, Eclipse, and Nauta—as well as Maserati—rather than from his competitors.

“We wanted a look that was very slender, long, and elegant,” said Johansson. “Most ships in port look the same—but this won’t. I’m looking for the Maserati effect. I want people to see it and wonder how stunning it is on the inside.”

He thinks of the 190-meter (623-foot) vessels as hybrids between ultra-luxury small ships and yachts. If small cruisers carry about 650 passengers, on average, and a typical superyacht can hold a couple dozen, these are right in between, with 298 passengers in 149 suites—comparable only to Ponant’s 132-room ships.

Compared with Ponant, though, Ritz-Carlton’s ships are about 200 feet longer, to accommodate enormous staterooms and an abundance of dining options, amenities, and public spaces—at least as many as what you’d expect to find on a much-larger 600-passenger ship. The end product will offer more choices, more places to hide away (both public and private), and the utmost flexibility in your day-to-day schedule.

Johansson is confident that these factors will put his ships in a class of their own.  “We tried to design the ship to be everything that a traditional, large cruise ship is not,” he said. “It’s a place where you go with no queues, no crowds, no disturbances—just a beautiful backdrop for beautiful people.”

Due to fire and safety regulations, most cruise ships’ common spaces are subdivided and sectioned off, with walls dividing restaurants from bars and lounges and casinos. For the as-yet-unnamed Ritz-Carlton ships, Johansson is pioneering an open-concept floor plan that will be “fluid and transparent” and will “break down the traditional boundaries between dining and drinking areas.” And no, there won’t be casinos.

Dining and drinking venues will be small and intimate, perhaps seating only a couple of dozen passengers at a time, and all will be open around the clock, without the assigned seats or prescribed dining times—or buffets—so common in the cruise industry.

“Everything will be like a yacht experience in that respect,” said Johansson. “The service will appear from nowhere, seamlessly, as opposed to traditional show cooking that’s loud and noisy.”

Other shared spaces will include a yacht-like marina platform, where glass doors open to a sweeping staircase that leads to a pool deck on the ship’s stern; it’ll be a place to have drinks and snacks or launch water toys such as kayaks and paddleboards. There’ll also be a massive, open-air penthouse space with a retractable roof and 270-degree panoramic views of the sea: It’ll be an al fresco lounge by day and a nightclub after sundown.

Accommodations will be called suites, not staterooms, and all of them will have verandahs and above-average ceiling heights. Certain hallmarks will be straight out the Ritz-Carlton design playbook. “It specifies all sorts of  details, from how big the writing desks should be and how many cushions should be on the beds,” said Johansson. Not all of them lend themselves to a cruise ship, though. Double sinks? They’re a Ritz-Carlton bathroom mandate—but they’d never been installed in a standard cruise stateroom before now.

Most small luxury ocean liners that are currently sailing—the Silversea Muse, the Regent Explorer, Seabourn’s Encore, Ponant’s Le Lyrial yacht, for instance—are being built as expedition ships or reconfigured to meet the demand of a burgeoning adventure cruise sector. They’re largely heading to the polar regions of Antarctica and Greenland and the Scandinavian fjords.

So Ritz-Carlton saw an opening in the market: small-ship cruising along the Mediterranean, the Caribbean, and New England. They’re classic destinations that are popular with cruisers—yet they’re almost exclusively serviced by mega-ships that overwhelm the regions’ biggest ports.

“I don’t want to stop in Marseilles—it’s a huge commercial port. Instead I can stop in St. Tropez,” he said, pointing to the type of small berths that his ships will be able to slip into—and that larger cruise ships cannot. “Commercial boats cannot go to places like Mykonos, to Portofino, to St. Barths,” he added. But his are small enough to manage it.

The first vessel will sail the Caribbean, New England, and Europe starting late 2019. In early 2021, a second ship will start sailing on similar routes. The third ship, which comes online in early 2022, will break from that pattern and head toward the South Pacific.

Douglas Prothero, managing director of the Ritz-Carlton Yacht Collection, says that the pace of the itineraries is another differentiator: It’ll be slower, with less time at sea and more time to explore. “We’ll do four ports in seven days, not seven ports in seven days.” With each new destination, local chefs, artists, dignitaries, and guest lecturers will come aboard  for a constantly rotating roster of talent and entertainment options.

Off-ship excursions will follow suit. Although the partnerships have yet to be cemented, onshore activities will likely be organized by the same high-end outfitters that luxury travelers would call to organize a land vacation. (Pricing will be announced at a later date; itineraries will be “targeted at the 1 percent of global travelers.”)

Why It’s a Game Changer

In many ways Ritz-Carlton is building on existing trends rather than reinventing the wheel—a majority of luxury cruise companies, for instance, are trending toward extending hours in port and are bringing in guest lecturers from relevant destinations to entertain their crowds. But by enlisting unpaid consultants, such as Valerie Wilson, whose namesake company is among the 30 largest travel agencies in the U.S. and moves more than $300 million in travel inventory, they are ensuring that all the small details will add up to something truly unique. “Its suites will be larger than anything its competitors can offer,” said Wilson, “and it’s almost mind-boggling that they’ll have five restaurants for less than 300 people.”

From an industry perspective, though, this will be the first time guests can combine cruise and land vacations with a single operator, by booking pre- and post-hotel stays with Ritz-Carltons in port cities. And more than likely, Marriott Rewards will be a perk of sailing with the Ritz-Carlton Yacht Collection.

Currently the official messaging from Marriott indicates that the yacht collection will have its own unique loyalty program, the details of which are still being finalized. (Ritz-Carlton's hotels have their own loyalty program, too, but guests’ points are linked with their Marriott Rewards or Starwood Preferred Guest status.)

According to Humler, though, “It would be key to the success of the cruise line to extend the loyalty program.” Doing so, he said, would help the brand “understand what [guests] like and what they want and cater an experience.”

Ritz-Carlton’s investment in the yacht collection is undisclosed, and much of it is financed by Oaktree Capital, a global investment manager with experience in the hospitality and maritime sector. But there are indications—based on Spanish shipyard reports that match the first yacht’s description and name Ritz-Carlton—that each vessel is costing €180 million ($200 million) to build. And that doesn’t include the cost of drawing top executives, such as Silversea's ex-chief financial officer, Victor Cai, from competitors.

With occupancy on cruise ships averaging 86 percent to 90 percent industrywide, compared to 78 percent occupancy across Ritz-Carlton hotels last year, Humler and Prothero are confident whatever the investment, especially as vessels can be repositioned to respond to changing regional demand.

“We think it can go to five ships,” said Prothero, who sees the product as appealing to a fast-growing demographic of young, high-net-worth cruise skeptics. And with the third ship sailing the Pacific Rim, the pair hopes to target Chinese and Japanese travelers—two other burgeoning groups with plenty of dispensable income.

Don’t expect yachts to be the last word in Ritz-Carlton’s brand evolution, either. “With the yachts, we wanted to think about where else we could take our customers,” said Humler. “In the next few months, I will work on taking our customer to air, too.”