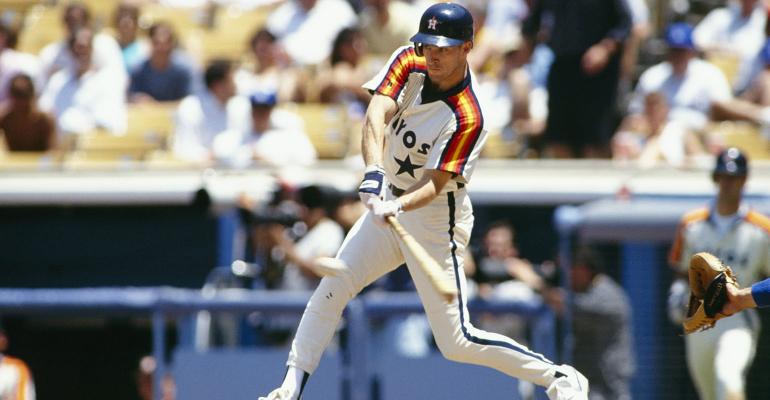 From the big leagues to big finance.

Steve Finley was drafted by the Baltimore Orioles in 1987, and turned an initial $600/month salary into a 19-year career in Major League Baseball. After retirement, he realized just how little he'd thought about finances as a player and how underprepared that left him for a long life after baseball. So, he became a financial advisor, and joined up with Morgan Stanley’s Global Sports & Entertainment as a sports and entertainment associate, to help teach today’s players best practices for making their money last. Wealth Management.com recently caught up with Steve to discuss his path from MLB to Morgan Stanley GSE.

Wealth Management: What were your first steps from baseball into financial services?

Steve Finley: For me, 2007 was my last year and I spent a couple of years doing nothing, just surfing and playing golf, etc. I didn’t really know what I wanted to do and I definitely wasn’t thinking about retirement, which was really stupid. At 42, I thought it wasn’t something I had to worry about. I had a friend who had his own company selling insurance and wanted to work with some athletes to encourage them to use insurance as a retirement vehicle and he asked me to come in and help him with some business development. For me it was kind of a way to give back and try to educate athletes on finances—at least as much as I could at that point.

WM: So you never thought about retirement as a player?

SF: Not exactly. I had a financial advisor from my second year in the big leagues on, but finances and retirement were not things I really had to think about. Understanding just how much you need to put away—that your career is really just a small part of your whole life is tough. You want to be able to do what you want to do, not what you have to do.

WM: How did you meet that advisor?

SF: Another teammate in the clubhouse was talking about a particular advisor who had just left his firm to focus on that player. It was really just a short conversation: “I’m starting to make a little bit of money now, so I should probably talk to someone.” And, he ended up being my advisor for the rest of my career.

WM: In your experience is that a common way for athletes to find advisors?

SF: It comes in a couple of different ways. One is just talking in the clubhouse. In my rookie year the starting salary was ~$80K, so money management wasn’t immediately a major priority, so I came to the decision more slowly through word of mouth. Nowadays, those conversation often happen before guys even get drafted. There’s so much money [so quickly] today that it’s tough to draw a parallel between then and now. Also, agents play a much larger role, since they’ve likely already had to help previous clients out with this and may even have stables of advisors that they use exclusively.

WM: Jumping forward again, how did you end up at Morgan Stanley?

SF: Through that insurance job I met some guys from Morgan Stanley—they were just starting the Global Sports & Entertainment division, with the aim of changing the narrative of so many [athletes] being broke just 4 or 5 years after they retire. For me, it made sense as a next move.

WM: That’s a big leap. Were there any growing pains?

SF: Absolutely. I didn’t understand what I was getting into—that I would have to take the Series 7 and the [Series] 66, which are very eye-opening tests. They explained it to me up front of course, but I didn’t really understand the difficulty of what I was getting myself into. Needless to say, it took a lot of studying, but I passed them both on the first try and started learning a lot about finance, which I found exciting.

WM: What part of being an advisor do you enjoy the most?

SF:  I love the educational aspect. Both of my parents were teachers, so teaching is kind of in my blood and I enjoy it—whether it’s working for the Padres as a special assistant to teach minor leaguers the ropes or with athlete clients at Morgan Stanley. Plus, the opportunity to learn finance to a degree that I never thought I would in my life has also been very personally rewarding.

WM: What’s your overarching approach to working with athlete clients?

SF: One of the hardest things I had to do in making the transition to my current position was reinventing or rebranding myself as a financial advisor. The term “financial advisor” never sounded good to me. A financial advisor makes investments for people and really manages their money, which to me infers a level of expertise that requires many years in the business. That’s not me. It makes more sense for me to be a “financial coach,” which better describes what I do. I have a great team that has the decades of experience that I mentioned earlier, and they largely manage the finances and portfolios, which frees me up to add value the best way I can—by mentoring these players, giving them advice and sharing my experiences to try and help them along that financial education path.