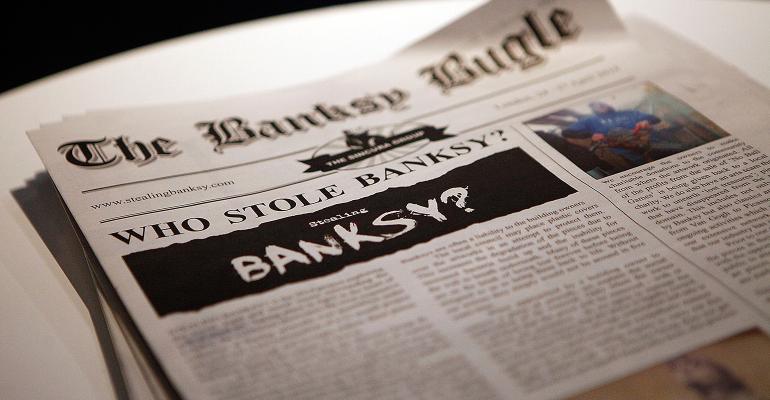 The Pros and Cons of Stealing Fine Art

Easy to steal, impossible to sell

(Bloomberg) --Ten days ago, a Banksy print valued at about $40,000 was stolen from a Canadian exhibit of the artist’s work. It was a seemingly effortless crime—a man walked in, took the work off the wall, and walked out—but then, most art crimes are. The heavy lifting comes later.

“The main rule is that it’s not that hard to steal art, even from museums, but it’s almost impossible to translate that art into cash,” says Noah Charney, a scholar and author who’s published multiple books on art theft. Paintings can be quickly cut out of frames, and small sculptures can be tucked into bags—even jewelry can be secreted away—but finding a buyer for your art or diamonds is often impossible.

“Criminals don’t understand that, because their knowledge of art crime is based on fiction and films,” Charney says.

There are exceptions, of course, including a much-reported theft from March 2017 when four men from an Arabic-Kurdish crime family in Germany broke into Berlin’s Bode Museum and stole a 221-pound gold coin made by the Canadian Mint. Using DNA testing, the German police managed to hunt down and arrest the men in less than four months (one of them had worked as a security guard in the museum), but the coin was long gone.

The theft was notable, not just because the perpetrators were caught—a rarity in itself—but because they’d allegedly managed to sell what they stole for a significant sum of money.

If art thieves knew how hard it really was to sell the art they’d stolen, Charney says, there would almost certainly be far fewer art thefts.

The Good News (If You’re a Thief)

“We’re very bad at catching art thieves,” says Charney. “We have a very low recovery and prosecution rate: Something like 1.5 percent of cases of art theft see the art recovered and the criminal prosecuted.”

So, should a thief have a buyer waiting in the wings, or simply want a painting or art object for himself, there’s a very good chance he’ll get away with it. Add to that the cachet of being an art thief (“Art’s always been associated with the social elite, so it’s an aspirational thing” to take, Charney explains), and stealing art seems like a pretty good deal.

If you don’t have a buyer before you steal the work, you’re in trouble.

“People assume that they’ll find criminal art collectors,” Charney says, “when in fact, we have very few historical examples—maybe a dozen to 20 who fit the bill.” Keep in mind that many hundreds of art objects are stolen every year. Those, needless to say, are bad odds.

“When people don’t find those criminal buyers, they end up offering stolen stuff to people who look like the criminals they’re expecting to find,” Charney says. “And those people always end up being undercover police.”

In other words, people often steal art thinking they can sell it, realize that it’s not so easy (if it were, everyone who wanted to be a legitimate art dealer would be rich), end up doing a low-key but obviously indiscreet marketing effort to attempt to sell the art, and get caught.

Even if criminals aren’t desperate enough to start hawking their wares to strangers, once they discover that there isn’t a large group of shady businessmen willing to spend “whatever it takes” for a mediocre landscape painting, they fall back on a Plan B: “The backup plan is to ransom it back to the victim, or the insurance company,” Charney explains.

But given that this tactic is a clear sign of desperation, the victim/insurance company is in an almost unassailable negotiating position, which results, at least historically, in the ransom being reported to the police and the criminal getting caught.

“There really is no Plan B,” Charney says. “Unless it’s gold.”

And that leads us to the only real solution for thieves: steal something you can turn into something else, like the gold coin in Berlin. Charney cites the 2004 theft of a bronze sculpture by Henry Moore, valued at about 3 million pounds ($3.98 million).

The sculpture weighed about two tons, “and it was almost certainly chopped up and melted down, then converted to ball bearings,” Charney says. Hertfordshire police determined it was cut up on the night of the heist, moved through various scrap dealers, and shipped abroad. The raw material was worth just about 1,500 pounds.

This might seem like a raw deal to most, but Charney says you should look at it from the thieves’ perspective: “They’re going to say, I worked for three hours in one night and got 1,500 pounds.”

In the case of the Berlin coin theft, the thieves were in a similar position with a much more valuable commodity than bronze. Police suspect that the group melted the coin down and sold the gold for hundreds of thousands of dollars.

“Of course, that’s a fraction of its intact cultural value,” Charney says. “There’s almost never been a criminal who knew about, or cared about, art.”


To contact the author of this story: James Tarmy in New York at [email protected]