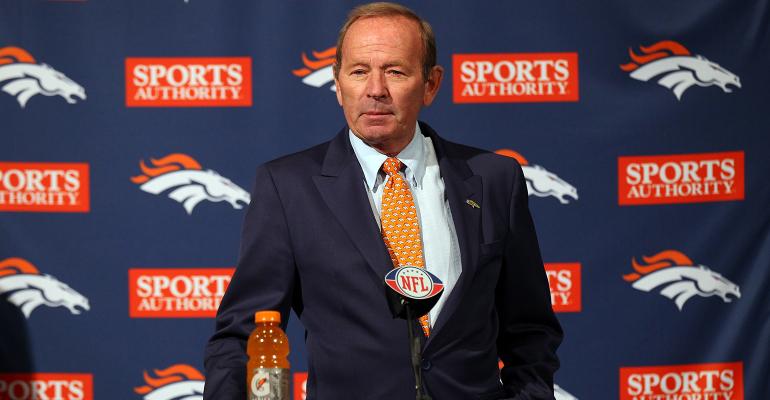 The recently deceased Bronco's owner set up a "hunger games" to determine which of his heirs will control the team.

Pat Bowlen, the flamboyant and well-respected owner of the NFL’s Denver Broncos died at age 75 Thursday evening, according to a statement released by his family.

Though Bowlen’s life was extremely interesting and his list of accolades a mile long, we’re more interested in his estate plan. Normally in one of these celebrity estate planning pieces, this is the part where I would regale the reader with the story of how yet another wealthy celebrity failed to have a proper estate plan in place, his family paid the consequences, and then I suggest what practitioners can learn from his misfortune. That’s not the case for Mr. Bowlen (at least as to the first point). He had a proper estate plan in place—one that’s now causing his family a bit of strife.

Bowlen stepped away from actively running the Broncos in 2014 as a result of his battle with Alzheimer’s. In order to ensure an orderly succession while he was still lucid, he placed the Broncos franchise in a trust managed by three trustees—Joe Ellis, president and CEO of the Broncos; Rich Slivka, Pat’s lawyer for decades and the Broncos’ general counsel; and attorney Mary Kelly—and laid out a series of qualifications that at least one of his seven children would have to meet if they ever wanted to assume control of the franchise. The factors included work experience and education, and the ultimate arbiters of a candidate’s worthiness would be the three trustees themselves.

This sort of vehicle is similar to what’s known as an incentive trust. And it does largely what it says on the box by marrying some aspect of a beneficiary’s inheritance to a specific set of requirements—laid out by the testator—that must first be met. These sorts of requirements can range from the relatively benign, such as attending a certain college or refraining from selling the family home, to a bit more intrusive, like requiring a child to marry inside of his own religion. In the estate planning business, this is what we call exercising “dead hand” control. Even though Bowlen wasn’t yet technically dead, his plan ensured that the Broncos’ succession would proceed by his very specific rules regardless of whether he was around to actively enforce them.

Generally, it would be a safe assumption that creating a sort of “hunger games” among one’s children to see who gets the biggest inheritance would be grounds for a ton of infighting. Thankfully, that hasn’t really been the case here. Instead the fighting has occurred between the currently most suitable candidate, 48-year-old Beth Bowlen Wallace—Pat’s daughter from his first marriage, and the trustees whom she accuses of self-dealing.

Despite her boasting a resume that includes a law degree, various philanthropic and business ventures, and a stint working as a special project manager for the team, the trustees have reportedly deemed Beth unqualified for the position. The trustees appear to favor 28-year-old Brittany Bowlen, notably the daughter of Pat’s current wife, Annabelle, as well as years away from being ready to actually assume control of the team. Beth’s Uncle Bill, a former minority owner who sold off his shares, has backed Beth and filed suit last year requesting the removal of the trustees. According to Bill, the trustees, who currently control the team, have a conflict of interest, as “implementation of [Pat’s plan] essentially means the defendants will be working themselves out of a position with the Denver Broncos Football Club.” And there may be some fire behind all of the smoke, as apparently Beth was removed from her position with the team by the trustees just one day after announcing her intention to pursue a law degree to check off another of her father’s inheritance requirements.

So where did Pat go wrong here? Some practitioners would hang the blame directly on the incentive trust framework itself, as such dead hand control is considered by many to be a toxic factor. However, others swear by such trusts, as the estate planner’s job is ultimately to ensure that his clients’ wishes are carried out to the best of his ability, and what better way to do so than by having an actual list of requirements?

That’s really an argument for another day, however. The main issue here, regardless of your opinion as to incentive-laden trusts, is placing conflicting powers, both to run the team and decide if one of the children has met the requirements to take over, with the three trustees. Whether they’re actively self-dealing or not, there is an undeniable conflict of interest present. If the trustees didn’t have to necessarily vote themselves out of a job by doing so, they may have deemed one of the heirs worthy already. Or maybe not. It’s impossible to know. Which is a big problem.

The Bowlen case offers a helpful reminder that trustee selection and the proper distribution of fiduciary responsibilities are essential aspects of any estate plan. The proper documents can all be in place and the drafting language absolutely airtight, but if you don’t have the right people making decisions—or, as in this case, you put the trustees in an impossible position by giving them conflicting responsibilities—then even the perfect estate plan will crumble.