Living wills and other advance directives are very important.

Former NBA star Lamar Odom was hospitalized Tuesday after being found unconscious in a Nevada brothel, according to major news outlets.

An already odd story took an even stranger turn on Wednesday when news broke that the now-comatose Odom's ex-wife, Khloe Kardashian, was responsible for making his medical decisions. It turns out that although the couple signed divorce papers in July, the backlog in the California courts is so intense that the divorce hasn’t yet been finalized and won’t be for several months, so the two are still legally married. Since Odom doesn’t have a living will, Khloe, as his legal spouse, is in the awkward position of having to make medical decisions on Odom’s behalf.

Most advisors stress the importance in any estate plan of the tertiary, or non-will or trust documents; things like healthcare proxies, living wills and powers of attorney. This admittedly bizarre circumstance is a perfect illustration of why this is the case, and advisors of all kinds should take note.

First, there’s no mention yet of the existence of a healthcare proxy in Odom's case. Obviously, Kardashian could have been saved this burden had Odom designated someone else to make his medical decisions in the wake of the end of their marriage. That being said, their divorce, even had it been legally completed, is still very recent, and it’s entirely possible that Odom does have a healthcare proxy in place that simply names Kardashian (most healthcare proxies designate spouses after all) because he hasn’t had a chance to update it yet (or, he didn’t care to and this arrangement is exactly what he wanted).

The issue here is updating these documents as soon as major life changes occur, because you never know when an emergency will arise. 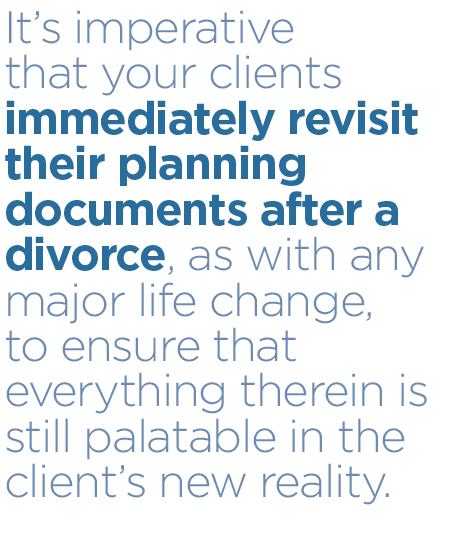 We do know that Odom lacks a living will, however. Had Odom a living will in place, in the absence of other documents, Kardashian would still be responsible for his medical decisions, but she and his doctors would, at the very least, have some guidance as to how he’d like to be cared for in terms of procedures, pain management, feeding and, if it comes to it, resuscitation.

Additionally, this unfortunate case holds a major lesson about the intersection of estate planning and divorce. Namely, don’t rely on the divorce itself to do all the work. Legally ending a marriage will automatically sever a number of relationships and free the parties from numerous legal responsibilities to each other, but an estate plan is a layered and complicated creature, and the intertwined duties that it can create will often linger even after a divorce is finalized. It’s imperative that your clients immediately revisit their planning documents after a divorce, as with any major life change, to ensure that everything therein is still palatable in the client’s new reality.

Though the facts here aren’t exactly relatable, there are a surprisingly large number of more common events that could leave a client in a similar position if the correct documents aren’t in place and properly updated (working under the assumption that most clients don’t want their ex-spouses to be responsible for their decisions in the event they’re incapacitated). That being said, the facts are still too murky to rush to judgment and label this particular circumstance a “celebrity estate planning fail.” (There are several scenarios whereby this strange confluence of events is actually advantageous to Odom, such as the fact that he is allegedly estranged from most of his biological family; at least somebody is designated to make these decisions for him.)

For all the sordid details around this tragedy you and your clients will be hearing about, it is at least a teachable moment and an opportunity to talk to clients about the importance of living wills and other advance directives.