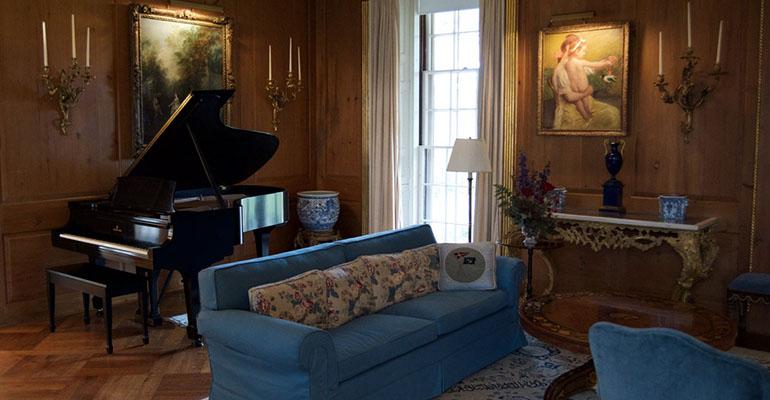 The Stillman family is frantically selling off multiple pieces of fine art to save Wethersfield.

(Bloomberg) --Beyond the formal gardens, past sculpted terraces and ornate fountains, rises Wethersfield -- the country estate of what was once one of America’s wealthiest families.

There, among rolling hills 95 miles north of New York, a grandson of James Jewett Stillman, head of the bank that would grow into Citigroup Inc., envisioned his private Eden -- a redoubt of horse-drawn carriages, strutting peacocks and Gilded Age splendor.

But today, like characters out of Evelyn Waugh, Stillman’s heirs are fighting to preserve their beloved Wethersfield in an age of cold financial reality. The estate, once thought to be safeguarded, is running dangerously low. Over the years, trustees of the Homeland Foundation entrusted to preserve Wethersfield trifled away millions, according to a state investigation.

And so it has come to this: Sumptuous artworks collected by the late Chauncey Devereux Stillman, grandson of the family patriarch, are being placed on the auction block. The hope is that the proceeds will be enough to bring to life the founder’s vision and preserve Wethersfield -- its house, gardens and trails -- for the public good.

It might be easy to dismiss Wethersfield as a familiar story of indolent affluence: One generation makes money, another squanders it. But the long arc of the Stillman fortune -- worth an estimated $1.6 billion, in today’s dollars, when James Stillman died in 1918 -- is a cautionary tale for the growing number of families creating private investment vehicles and foundations to guard their wealth and legacy. One clear lesson: Pick trustees and money managers carefully.

“These dynastic families are potentially at risk,” said William Kambas, a partner in the private client and tax group at law firm Withers Bergman LLP. “Often, second, third and subsequent generations may not have had the education, training and exposure in managing their assets as the original wealth generators had. It may be more difficult to evaluate action taken by outside advisers.”

In their heyday, the Stillmans were New York royalty -- not quite Carnegies, but fabulously rich. James Stillman, a peer of William Rockefeller and E.H. Harriman, lorded over railways, insurance ventures and telegraph companies. A friend and early patron of artist Mary Cassatt, he maintained homes in Manhattan and Paris and a place in Cornwall-on-Hudson, New York, from which he commuted to the city on his yacht. Two of his daughters married Rockefellers. His National City Bank, the Citigroup forerunner, was one of the nation’s most powerful banks at the time.

For Chauncey Stillman, who studied architecture at Columbia University and served as an air combat intelligence officer during World War II, Wethersfield was a labor of love. A horse lover and pioneer in land conservation, he bought several depleted farms in the 1930s, naming the property after the Connecticut town where his family settled in 1705.

He spent more than two decades creating gardens evoking those in 17th century Italy. A room with a vaulted ceiling and frescoes once displayed his most prized artwork, “ Portrait of a Halberdier,” a painting by Pontormo that sold at auction to the Getty Museum for $35 million shortly after his death in 1989.

But by the early 2000s, the Wethersfield fortune began to fade. The foundation’s expenses and grant outlays exceeded revenues for 14 straight years, filings show. Trustees diverted millions of dollars to personal causes, including alma maters and children’s schools, according to admissions they made in connection with Attorney General Eric Schneiderman’s probe.

Homeland’s assets totaled $103 million in 1998. By April 2015, they’d dwindled to $31 million. That year, Schneiderman alleged that former trustees used the foundation as “a piggy bank” and that its ex-president misdirected $701,328 for personal benefit. In an agreement with Schneiderman’s office, seven former trustees admitted they routinely awarded money to “institutions that had nothing to do with the Wethersfield Estate.”

The former trustees agreed to compensate the foundation $4.4 million. Thanks to that payment, Homeland’s revenue finally exceeded expenses in the latest tax return.

There is now a new board in place that includes family members. The new trustees “had to make some difficult choices to right the ship,” said Tara Shafer, Chauncey Stillman’s granddaughter who joined the board in 2016.

To help raise an infusion of $20 million, the board obtained court permission in December to sell five paintings and nearby farmland. In February, Homeland Foundation changed its name of almost 80 years to Wethersfield Foundation to underscore its mission.

The new entity has consigned 16 artworks, including those by Edgar Degas and John Singer Sargent, to Christie’s. The group is expected to raise more than $12 million at auctions starting this month.

Old Master works, including Nicolas Lancret’s “Autumn,” will be offered on April 27 in New York. A painting of a boy with a dog by Henri de Toulouse-Lautrec, valued at $1.5 million to $2.5 million, will be in the evening sale of Impressionist and modern art on May 15.

“I am very sad about it because I know how much these paintings meant to my father,” said Theodora S. Budnik, a daughter of Chauncey Stillman. “But the survival of Wethersfield is more important.”