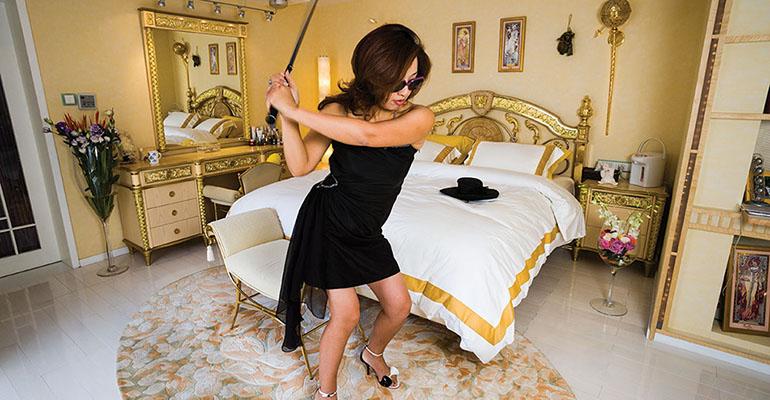 A Look at the Ugly Side of Getting Rich

Through Lauren Greenfield’s lens, the accumulation of wealth comes off more as a destructive addiction than a path to self-improvement.

(Bloomberg) --In one photograph, the German-born, Harvard-educated hedge fund manager Florian Homm, who made and lost a personal fortune of more than $800 million, poses in a German brothel that he once co-owned. In another, Imelda Marcos, the former first lady of the Philippines accused of stealing billions from state coffers, sits in her Manila apartment beneath a gold-framed Picasso. Later on, a 43-year-old Chinese billionaire Huang Qiaoling is pictured walking from his mansion, built as a full-scale replica of the White House, to his chauffeured Mercedes S Class.

Dozens more similarly lavish and disconcerting vignettes fill Generation Wealth (Phaidon, 2017), a 504-page monograph by Lauren Greenfield and out on May 15. A photographer who has spent the last 25 years documenting wealth, class, and status symbols, she offers a glimpse into the spending habits of ultra-wealthy tribes: hedge fund managers in New York such as “Suzanne,” whom Greenfield follows for several years as she attempts to have a child; entertainment executives like Brett Ratner, who is shown on St. Barts with a platinum American Express card stuck to his forehead; industrialists such as Italian apparel billionaire Renzo Rosso, who shows off the home gym in his 18th century villa; and “time-share king” David Siegel, who, with his wife Jackie, would go on to become the subject of Greenfield’s documentary, Queen of Versailles.

Greenfield’s photos, accompanied by essays and interviews, kick off in 1990s Los Angeles at the moment Beverly Hills debutantes and Compton rappers were swapping cultural aspirations, and as plastic surgery was trickling from the purview of aging socialites down to image-obsessed teenagers. One Malibu teen, photographed at a pool party three days after her nose job, says: “Out of my 10 close friends, six of us got something done.”

Through Greenfield’s lens, the accumulation of wealth comes off more as a destructive addiction than a path to self-improvement. “It doesn’t lead to personal or financial fulfillment, and eventually you fall,” said Greenfield, who spoke on the phone from Los Angeles. “The trajectory of the last 25 years isn’t sustainable on a lot of levels—environmentally, morally, spiritually, or within communities and families.”

Not that Greenfield is particularly anti-materialist or anti-capitalist. She shoots like a documentarian, both empathetic and non-judgmental when confronted with women who use plastic surgery to cope with family strife, or with white collar criminals such as Commercial Financial Services founder Jay Jones, who forfeited his $500 million fortune, laid off nearly 4,000 employees, and went to prison for more than three years after being indicted for a conspiracy to commit fraud. “I feel like the book serves as a cautionary tale,” Greenfield said.

Beyond these extreme examples, though, is what Greenfield describes as the “homogenization” of the global elite. Whereas 50 years ago, the world’s rich varied from country to country (if not from city to city, or street to street). Now, Greenfield said, “when you’re in St. Moritz, the Russians are mixing with the French, mixing with the British. All nationalities are welcome to share Champagne and whatever else, together.” In other words, the rich might not be like the rest of us, but they are—in this book at least—very much like one another.

There are a few totems that cross every cultural divide. The Hermès Birkin bag is a crisp, rectangular purse with a floppy top that can sell for as much as $300,000. Canadian socialite Suzanne Rogers is photographed in her closet, where she had stored more than 10 of these handbags in their original boxes. “I was blown away by how a teenager in L.A., a woman in China, a socialite in Russia, and a therapist in New York all know about it,” Greenfield said. “And not all of these people could access the bag, obviously, it’s too expensive. But it’s just that there’s this knowledge about something that seems like such a fringe experience.”

Similarly, Greenfield discovered that high-end kitchens—what she dubs “appliance porn”—carry an appeal across oceans, cultures, and continents. “These modern kitchens with granite counters and commercial-grade appliances used to be in the most upscale of houses,” she said. “And then, during the boom, you’d see it in a lot of middle-class homes: the stainless steel stoves and so forth.”

Now, she said, commercial chef’s kitchens have somehow managed to become a prerequisite of homeownership. “I remember there was this one Russian woman whose husband was a real estate developer,” she said. “She had this kitchen out of Architectural Digest, and I said ‘Oh, what a beautiful kitchen. Do you cook?’ And her answer was ‘No.’”

When Stuff Doesn’t Cut It

Now that these status symbols have become ubiquitous, Greenfield said some groups, such as the new Asian rich, are gravitating toward such aristocratic pursuits as polo and sailing. “There’s an etiquette class in China, where people spend $16,000 for a two-week course where they learn how to pronounce luxury brands, eat caviar, and sit at the table like a Westerner,” she said.

The school, known as the Institute Sarita in Beijing, was founded by Sara Jane Ho, a Hong Kong-born entrepreneur educated at Phillips Exeter Academy, Georgetown University, and Harvard Business School. She offers two courses: a 12-day hostessing class for married women ($16,000), and a 10-day debutante course for unmarried women ($13,000). Ho is quoted in the book as saying that “in China we have a culture of conspicuous consumption, but my students are trying to move beyond just buying a label for its label.”

“When I first went to China [in the early 2000s], everybody wanted Hermès and Louis Vuitton bags,” Greenfield said. “But by the time I went back everyone could have it, so it wasn’t special anymore. So now the way they distinguish themselves is to emulate the [Western] aristocracy.”

“If you have a Louis Vuitton bag, there are thousands of those bags,” Ho said. “But if you have a horse in an Hermès saddle, it defines you in a different way.”

That might be true for some, Greenfield said, but for others, status symbols go only so far. “I think one of the things we’ve seen in a lot of the characters [in her book] is that money is an enabler of what’s already there,” she said. “David Siegel [the time-share king] said that money doesn’t make you happy—it makes you unhappy in a better part of town. I love that, because who should know better than him?”