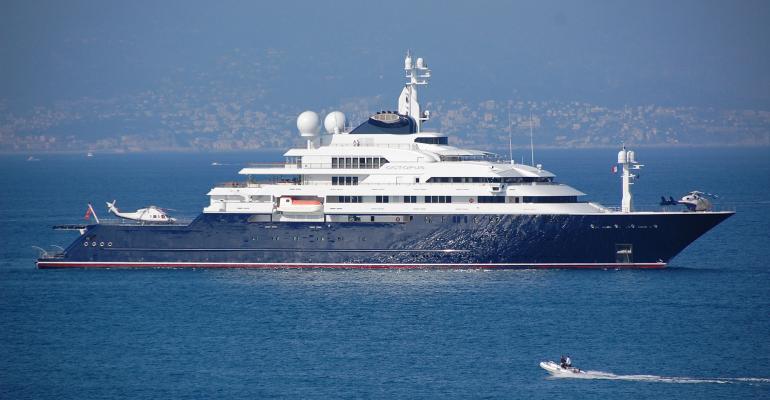 The 414-foot vessel was the fourth-largest in the world when it was built in 2003. It has gone through an eight-month refit and features 13 cabins two elevators, an eight-person submarine, two helipads and garage space for helicopters and an SUV.

At 295 million euros ($326 million), the 414-foot vessel where the billionaire partied with U2 and Mick Jagger, and sailed to destinations from Venice to Shanghai, is listed at brokerages Fraser and Burgess.

Allen, who died in October at 65, co-founded Microsoft with Bill Gates in 1975 and left in 1983. He turned his stake into a $26 billion fortune over the next three decades, according to the Bloomberg Billionaires Index. Through his family office Vulcan Inc., Allen acquired sports teams, real estate, art and invested in startups. Allen had no spouse or children to inherit his empire, though his sister, Jody Allen, is Vulcan’s chair.

He had a deep affinity for the German-built super yacht. When it was first delivered in 2003, Allen was overwhelmed by its size -- a third longer than a football field, according to his 2011 memoir “Idea Man.” At the time, it was the fourth-largest in the world, with the top three built for heads of state, he said.

“When I first stood on the bridge, I felt as though I was on a spaceship,” he wrote, adding that with features including a pool, basketball court, movie theater, a recording studio with ocean views, “all my passions come together in one moveable feast.”

The vehicle, currently anchored off Antibes, France, was far more than just a pleasure craft. Capable of scientific research voyages, Octopus was designed to venture into remote places.

The super yacht has gone through an eight-month refit, according to Fraser. There’s space for 26 guests in 13 cabins, and room for 63 crew members. It has two elevators, an eight-person submarine, two helipads and garage space for helicopters and an SUV, according to Burgess.

One of the most prominent sales this year was the yacht formerly known as Equanimity, which was seized by Malaysia’s government from fugitive financier Low Taek Jho, a central figure in the 1MDB scandal. It was bought by local gaming giant Genting Malaysia Bhd., which paid $126 million. It’s since been renamed Tranquility and was rented last month by Kylie Jenner for her 22nd birthday.

Other than Octopus, Allen’s estate also owns the National Football League’s Seattle Seahawks and the National Basketball Association’s Portland Trail Blazers. The teams are worth more than $3 billion combined, according to the Bloomberg Billionaires Index.

At least half his assets were probably earmarked for charitable purposes after he joined the Giving Pledge, and an estate tax bill will apply on much of what remains as they’re liquidated.

Anyone buying Octopus is also getting a piece of popular cultural history. Jagger and Dave Stewart recorded tracks on the yacht, and U2’s preview for an album was so loud it burned out the speakers. Allen also has taken it for adventures that included what he described as his most memorable dive onto the deck a sunken aircraft carrier, as well as exploring an ancient Roman wreck in the Tyrrhenian sea.

“It’s less a Bentley than a Range Rover,” Allen said in the memoir, adding that “Octopus has realized every mission I had in mind for her.”

To contact the reporter on this story:
Hailey Waller in New York at [email protected]