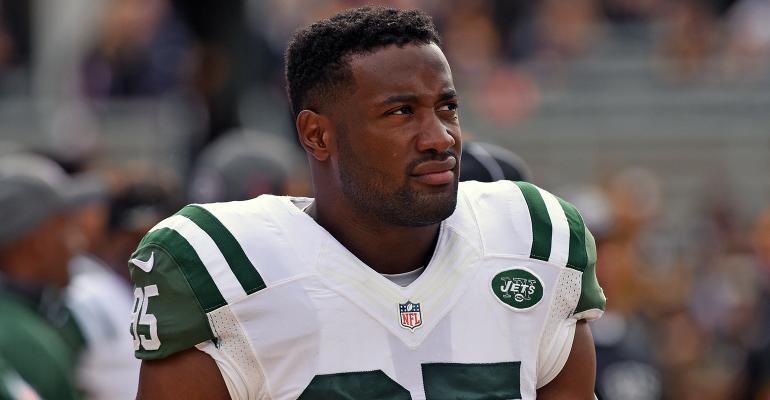 Not every professional athlete is an instant millionaire.

Josh Martin, a seven-year NFL veteran, is the epitome of a journeyman—jumping from team to team after breaking into the league as an undrafted rookie in 2013 with the Kansas City Chiefs.

When he first made the Chiefs’ roster as a 21-year old, he spent the first month of the season sleeping on an air mattress in the spare bedroom of his teammate’s apartment. His salary was dwarfed by most of his star teammates’ and he quickly learned the life of a professional athlete was a shrewd business.

“All these guys were making tens of millions of dollars,” Martin recalled. “I couldn’t keep up with the Joneses if I wanted to. I didn’t have a choice.”

When he finally made the team, still bouncing from the practice squad to the active roster, he made his first financial splurge.

Part of his signing bonus put him in the position to rent his own month-to-month, fully furnished apartment—no longer needing to sleep on his teammate’s air mattress. He also purchased a car.

“People always ask, ‘What's the craziest purchase you ever made?’ I respond like, ‘Oh, I bought this brand-new Jeep Grand Cherokee.’ It sounds underwhelming.”

Troubles With a Financial Advisor

During his first year, Martin earned about $250,000. He lived modestly while in the same circle as the high-earning stars. Soon, Martin was able to bring his savings account to $100,000 and knew he needed help.

“I didn't know what to do with it. I wasn't going to try to figure it out. People see Columbia and they think you have everything figured out,” Martin said.

He relied on his relationships to put him in touch with his first advisor.

“I can't say that I had specific goals," he said. "To me that's what I would've expected a financial advisor to help me figure out. That's not something that was the case with my first financial advisor.”

Martin was in a unique situation as an undrafted free agent and his paycheck was unsecure.

“I wasn't sure if [my first advisor] was explicitly a fiduciary," he said.  "Something that was questionable that he did was he put me in these mutual funds that were front loaded with fees.”

“Was that the best vehicle for me to invest my money in? Absolutely not. I would expect the financial advisor to be more knowledgeable of my situation and consider all the factors," he said. "Whether he did or he didn't, that was a bad decision. That's why I ended up pursuing a different financial advisor. I didn't realize that until I educated myself. That's when I became so interested in attending the financial literary boot camp that the NFL offers.”

He gravitated to the program provided by the NFL and eventually became a keynote speaker for one of the financial literacy events.

“I knew that I was a football player, but I needed to be knowledgeable enough to have conversations and to poke holes and ask the right questions to make sure that the people who were helping me manage my money were doing it the right way. They were doing what was best for me,” Martin said.

“Part of that meant I had to understand my situation and my unique needs and goals, my risk tolerance.”

Within the program, the group went over how to evaluate a financial advisor, utilize different relationships such as accountants and other professionals.

“I don't like having everything under one roof," Martin said. "I'm a big believer in separation of church and state and checks and balances. If I have a question that I don't understand or someone says something I don't understand, I'll take it to my other guy, my accountant for example, and say, ‘Hey, does this make sense to you?’”

As Martin progressed in the NFL, so did his salary. In 2017, he signed a two-year, $4 million contract with the New York Jets.

“That changed things,” Martin said. “I became a millionaire in my fifth season based on my savings and retirement funds. I could generate a substantial amount of money through my investments that would be able to support my lifestyle to a certain extent. There was some comfort.”

Martin cut his relationship with his agent and joined with Gary Vaynerchuk and AJ Vaynerchuk’s sports agency, VaynerSports. Vaynerchuk is well known for his entrepreneurship, content and social influence.

“I had a belief and understanding that I needed to begin to invest in myself more heavily off the field. Everyone talks about money, but they don't talk about social capital,” Martin said. “As an NFL athlete, how can I build the relationships and put myself in contact with the right people to also benefit me when I'm done playing? The reality is when I'm done playing, people aren't going to be as interested in me. I recognize that. How can I use that now?”

Martin decided to put money into ventures he was interested in pursuing after football. With VaynerSports, Martin developed multiple video series like "First Down & Life" (exploring his future transition, community and mentality), 'First Down Feasts" (exploring culinary and restaurants) and "Making America" (which followed him on a road trip from New York to LA as he had conversations with community leaders on social issues). He also created a podcast.

During the 2018 season with the Jets (just one year after signing his largest contract), concussions sidelined Martin for the season after playing just one game. He joined the New Orleans Saints in 2019 but suffered a shoulder injury during preseason that ended his year.

“Two years, back to back late in my career on injured reserve, prospects weren't looking great in terms of continuing to play, at least increasing my earnings ability,” Martin said.  “On one hand you know you're not going to play forever, but on the other you still love the game and you want to play for as long as you can or as long as you see fit. The reality, that's not always something that we can control.”

He also has advice for young, professional athletes.

“When you're stepping into the NFL, you become the CEO of such-and-such company. I'm the CEO of Josh Martin Inc. Every decision I make affects the value of my company, myself and the contracts that I receive or the investments that I make off the field, and the relationships that I make. You become more appealing based on the decisions that you make, one way or another, on and off the field, so I think it's important to keep that in mind. Don't be afraid to build and leverage social capital. In some ways it can be more valuable than anything you could ever earn on a football field.”