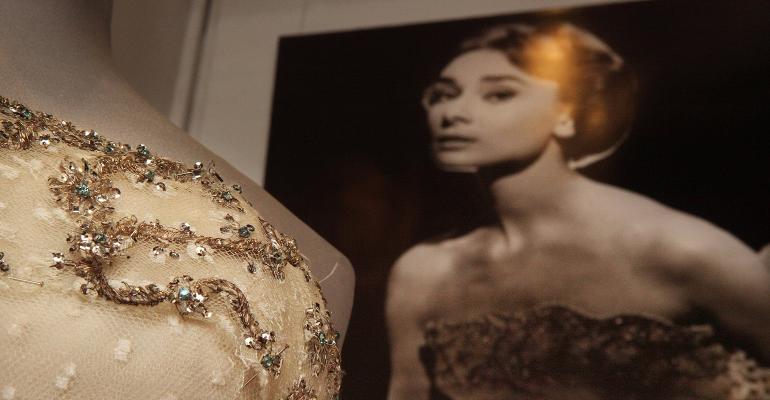 How Do You Put a Price on Audrey Hepburn’s Personal Treasures?

The movie star’s belongings are up for auction. Now, how to figure what they’re worth.

“It’s a very difficult question to answer,” said Adrian Hume-Sayer, Christie’s director of private collections. “How do you put a price on provenance?” It’s one that Hume-Sayer and his team at Christie’s are grappling with as they arrange hundreds of objects consigned by Hepburn’s two sons for a standalone sale, “The Personal Collection of Audrey Hepburn.” “What we’re selling, really,” said Hume-Sayer, “is the connection to the individual.” A collection of Hepburn's ballet flats.

Whereas a car transports you places and a house gives you shelter, a painting or a piece of movie memorabilia is, for all intents and purposes, worthless. Art and collectibles don’t have a use value. Yet the art market—capricious, opaque, and confusing as it might be—has managed to establish a comparatively static series of prices: Anyone with a Picasso can expect to sell it for a minimum (and maximum) dollar amount.

Those expectations are dashed, though, when it comes to objects with celebrity provenance. A ring owned by Nancy Reagan was “worth” about $8,000, but sold for $319,500 at Christie’s New York. Across the Atlantic, a gray purse once owned by Margaret Thatcher that looked thrift-store ready (high estimate: $2,272) sold for an astonishing $24,635, or about $10,000 more than a new Birkin bag from Hermès.

Similarly, the sheen of an Audrey Hepburn provenance has already proven wildly lucrative. In 2006, the little black Givenchy dress she wore for the movie Breakfast at Tiffany’s sold for 467,200 pounds (its a high estimate was 70,000 pounds). Five years later, in 2011, the “Ascot” dress Hepburn wore in My Fair Lady, estimated at $300,000, sold for $3.7 million. There is an empirical basis, in other words, for applying what you could call a “Hepburn premium” to her belongings.The question is how much that premium should actually be.

“Almost whatever you decide, people will disagree with you,” Hume-Sayer said. “It’s just so subjective to one’s own instincts and gut feelings and preferences.”

The SaleThe auction will take place in two parts: a live sale, comprising no more than 200 lots—any more than that and the sale wouldn’t fit into one day—and an online sale, which will run from Sept. 19 to Oct. 3.

Contents of the auction can be divided into three categories. The first is clothes, couture, and costumes, which include luggage and her makeup case and other sundries. The second category is film memorabilia from the making of her movies, correspondence between her and other stars, and souvenirs, such as Playbills. The annotated script for Breakfast at Tiffany's.

The final category, Hume-Sayer said, is made up of professional portraits from her collection by such artists as Cecil Beaton. “Those are also mainly from films, but not exclusively,” he said. Of the handful of lots the auction house has released to the public, her annotated script for Breakfast at Tiffany’s carries the highest estimate, at 60,000 pounds to 80,000 pounds. “Without going into specific comparables, there is a record of important film scripts selling at auction,” said Hume-Sayer. (In 2005, Marlon Brando’s copy of The Godfather script sold for $312,000 at Christie’s in New York.)

The rest of the available high estimates are monopolized by Hepburn’s apparel: A blue dress by Givenchy carries a high estimate of 15,000 pounds, a range of ballet flats start at 1,500 pounds, and a gold cigarette lighter, inscribed “FOR MY FAIR LADY – GENE ALLEN” is estimated between 3,000 pounds and 5,000 pounds. A portrait of Hepburn by Bud Fraker.

The photography in the sale carries what are arguably the most conservative prices. One photograph of Hepburn by Bud Fraker carries a high estimate of 800 pounds, while another is priced at 2,000 pounds. Those (comparatively) modest prices make intuitive sense, given they’re fine art photographs, and therefore fit within a distinct and identifiable market. “The photography has largely been valued as a work of art,” Hume-Sayer said. “The provenance has been taken into account, but less so than the intensely personal items.” A photograph of Hepburn by Steven Meisel.

The more it meant to Hepburn, in other words, the more it is ostensibly worth to collectors. As more lots are announced, that might be the key to understanding valuations that bear little to no connection with the object’s normal value. “It’s that closeness to her person,” Hume-Sayer said, “that really resonates with people.”