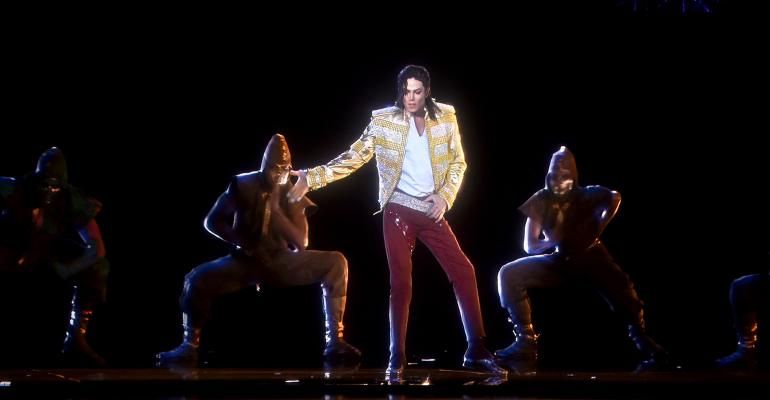 The ethics of exploiting the likenesses of dead celebrities.

If you follow pop culture, you might have noticed a new trend crop up—realistic-looking holograms of public figures. From Tupac Shakur at Coachella in 2012 to Michael Jackson at the Billboard awards in 2014, some of Hollywood’s biggest stars have been brought back to life using the technology. Most recently, Kanye West made headlines last month after he surprised his wife, Kim Kardashian, with a hologram of her late father, Robert Kardashian, for her birthday. Naturally, as the use of such visual recordings has gained popularity, the question of the ethics of using others' personas for such purposes after death has become a topic of interest and conversation among estate planners.

In addition to the issue of likeness trademark rights to create a hologram, other sensitivities need to be addressed as well, such as how to use the individual’s legacy without exploiting them and whether it would have been against their wishes to do so at all. The estate of Whitney Houston notably scrapped a hologram performance by the late singer set to take place on an episode of The Voice back in 2016, citing that the visual “didn’t look like Whitney.” A planned Amy Winehouse hologram tour was also put on hold amid fears of it being viewed as insensitive or poorly timed.

Taking a cue from Robin Williams who forbade the use of his likeness for 25 years following his passing, Avi Z. Kestenbaum, a partner at Meltzer, Lippe, Goldstein & Breitstone LLP in Mineola, N.Y. and New York City, says “I do think more public figures and ultra-high-net-worth individuals will start addressing post-mortem rights to publicity in their estate-planning documents. The issue is there are very limited legal protections under federal laws and only some states offer protections, and even those state protections are currently limited in duration.” Kestenbaum has a point, as Williams isn’t the only celebrity to have the topic on his radar. When asked about his thoughts on holograms in an interview during his ongoing farewell tour, Elton John reportedly said, “That’s the last thing I want. It’s like doing a duet album with someone who’s dead.”

The risk of exploiting the dead for personal gain and profit particularly becomes an issue for heirs and administrators when an individual doesn’t address such rights in an estate plan, and stewards of such estates need to tread carefully. To determine whether an individual’s rights may have been infringed, Harvey I. Bezozi, a tax expert located in Boca Raton, Fla., explains, “In analyzing each particular situation, there are three areas to consider: 1) individual state requirements which vary (some states call post-mortem rights ‘property rights,’ while others call them ‘rights of publicity;’ 2) how long after death are these rights protected in each state; and 3) is there a First Amendment protection under the Constitution.”

According to Kestenbaum, because only a limited number of states address the issue and offer protections in the area, “there should be a federal law dealing with this similar to copyright law, or states need to do a better job enacting laws in this fledgling, complex and often controversial area and perhaps enact a uniform law.”

Most recently, New York became one of the states to pass a bill creating post-mortem rights of publicity. The bill now awaits Gov. Andrew Cuomo’s signature. The proposed law will protect deceased individuals for 40 years after they die and will protect only individuals whose rights of publicity have commercial value at the time of their death, or "because of their death." The law isn’t retroactive.

Specifically speaking to holograms, the provisions of the law “protecting against the use of digital replicas of deceased performers include a requirement that the use be likely to deceive the public into thinking that it was authorized by the deceased person or their successors.”

The Future of Post-Mortem Rights

As Kestenbaum points out in his recent article, conversations about post-mortem rights shouldn’t be limited to those with celebrity clients. Every estate planner should be aware of the issues surrounding a client’s likenesses or any other post-mortem data and imagery that may be valuable and useful to both the client’s heirs and the general public. Kestenbaum notes that young practitioners should especially take note, as modern technology continues to evolve at a rapid pace.