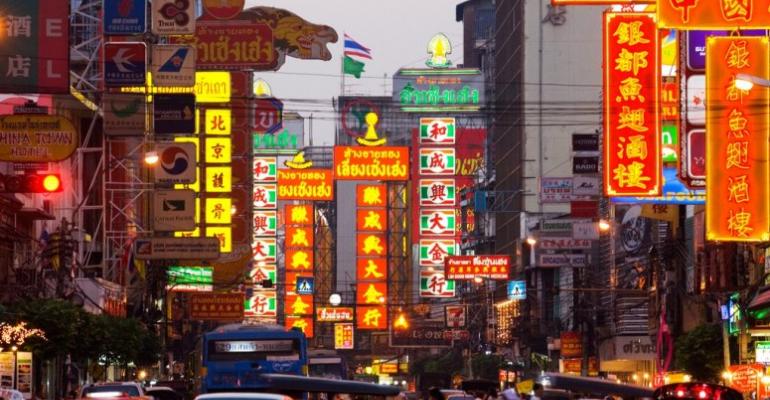 The Future of Wealth? Look to the East

The outlook for the wealth management industry in the U.S. looks tepid, but the Asia-Pacific market is poised for growth in the years ahead, the Boston Consulting Group says.

While global wealth is expected to grow 4.8 percent in the next five years, the bulk of new wealth creation will be driven by the “new world,” which includes Asia-Pacific (excluding Japan), eastern Europe, Latin America, the Middle East and Africa. Asia-Pacific will experience the most significant growth in wealth, increasing 11.4 percent by 2017 and overtaking North America as the largest wealth region, according to The Boston Consulting Group’s Global Wealth 2013 report.

“In the last five years, the new world increased its share of global wealth from 20 to 30 percent, mainly driven by fast economic growth, new wealth created, and by a high savings rate in percentage of GDP,” said Daniel Kessler, partner and global leader of the wealth management topic for BCG in Europe. “Whereas in the old world, they primarily rely on the performance of existing assets.”

This “new world,” as BCG calls it, accounted for 20 percent of global wealth in 2007, and this grew to 30 percent in 2012. BCG expects that growth trajectory to continue, with the new world accounting for 40 percent of global wealth by 2017. The Asia-Pacific region will account for two-thirds of that growth, said Anna Zakrzewski, principal and topic expert for wealth management at BCG.

Much of that will be driven by China, where wealth is projected to jump 104 percent by 2017, surpassing Japan to become the second wealthiest nation. India is expected to increase its wealth by 127 percent and Russia will rise 90 percent by 2017.

What’s driving the massive growth in the new world? While the growth in the old world has been primarily driven by performance of existing assets, with the S&P 500 up 13 percent last year, the growth in the new world regions is driven by high GDP growth and high savings rates in these countries. New world countries are growing GDP at an average annual rate of about 10 percent, versus about 2 percent for old world countries, Zakrzewski said. Meanwhile, the savings rates in those regions average 9 percent, three times higher than the old world, she said.

Meanwhile, the outlook for the U.S. is somewhat lackluster. While U.S. wealth grew 8 percent last year, this growth was mostly due to the 13 percent rise in the equity market, said Bruce Holley, BCG senior partner and topic expert for wealth management and private banking in the U.S. Holley forecasts a more modest annual growth rate of about 2.1 percent for the next five years. The market performance is not at sustainable levels, he said, and he expects the markets to come down in the next few years.

Although the U.S. will still be the top wealth market in terms of dollars, it is actually losing global share of wealth due to a high dependency on the growth of existing assets, Holley said. In the last five years, the U.S. moved from 35 percent of global wealth to 32 percent, and Holley expects that to drop to 28 percent by 2017. So in order to see any growth and stay in business, wealth managers will have to capture share from competitors, Holley said.

“[Wealth managers] are still grappling with their models,” Holley said. “So it’s not just growing with the market, or growing with what you have. For some of the ambitious players, they actually have to steal share and actually rethink their operating model and their business model.

Not only is the U.S. losing global share of wealth, but the wealth management industry’s margins are not once they once were, said Monish Kumar, senior partner at BCG and leader of the financial institutions practice in North America. Over the last five years, margins have declined from about 30 percent to 20 percent, said Zakrzewski.

“We don’t see margins getting back to 2007 levels any time in a hurry,” Kumar said. 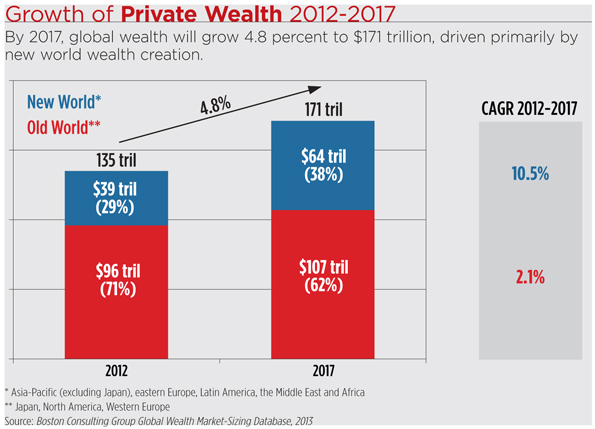