ADVERTISEMENT
1. Listen to your “spidey sense.”

When they’re feeling that something isn’t on the up-and-up, it may be because your clients’ subconscious picked up things that their conscious mind missed or didn’t want to see. Urge your clients to pay attention. If they’re experiencing a nagging sense of doubt, don’t let them get talked out of this feeling too easily. Their instincts could save them a life of misery. In almost all of the cases that I’ve known that ended badly, the individuals had suspicions but talked themselves out of it.

2. Is the individual trying to rush your client into something?

What’s going on could be entirely legitimate, but it could also be that the con artist didn’t want your client to have time to think. Recommend to your clients to never allow themselves to be rushed into marriage; the longer they know the person, the harder it is for the con artist to hide their true character.

3. How does the romantic interest act in daily life?

Life coach Martha Beck likes to say, “How you do something is how you do everything,” and I couldn’t agree more. The thing I tend to notice most of all is how they treat waiters or cab drivers or people behind the counter in a store. Are they inconsiderate? Rude? Or, on the contrary, do they unfailingly treat everyone with consideration and respect? To me, an X-ray into people’s characters is how they treat people who they feel are unimportant to them.

4. Does the love interest pay their bills on time?

If not, and if this behavior is habitual, it’s a first cousin to stealing. The individual is ignoring a reciprocal obligation that honest people take seriously. If your client’s love interest doesn’t pay bills promptly, this could predict the level of conscientiousness with which they’ll approach your client’s finances.

5. Is the individual in debt?

This is a very serious red flag. There are people who want free money, and the possibility exists that they’ve targeted your client as the magic answer to their financial difficulties.

6. Does the individual need money to help bridge a short-term financial emergency?

I’ve never seen this kind of situation work out well. I’ve seen dozens of cases in which a woman is deeply in love, wants to help the man she loves and “understands” how he got into the predicament. Being kind-hearted and generous, she’ll do anything to help him so that they’ll have a lifetime together. There may be cases in which this doesn’t lead to heartbreak, but based on every case I’ve known, I wouldn’t bet on it.

7. How often does the individual need to make excuses for his behavior?

In the scales of trustworthiness, positive actions weigh an elephant. An excuse weighs a mouse. Two excuses weigh a cockroach.

8. Urge your client to notice the individual’s relationship with others.

Does the individual have a caring family? Long-standing professional relationships? Long-term friends? If your client wants to avoid fortune hunters, instruct them to get to know the individual’s family and make sure to spent time with people who’ve known the individual for years.

9. Does the partner constantly remind your client how trustworthy he is?

10. Flattery is another red flag.

It’s bonding that makes a person feel good, and can be a genuine expression of true feelings. But weighing against that possibility is the fact that flattery can also be an incredibly manipulative tool in the hands of someone who wants what your client has.

Words may convey the deepest, most soul-felt feelings. Ah, but then again, they may not. A guy once told me how he could “score” five nights a week on one of the internet dating sites. His method? “I tell the woman I want to sleep with, ‘I love you.’” The guy went on to explain to me, “There are no three words in the English language that get you greater results for less effort.”

12. Lying should be a deal-breaker.

I agree with the old Chinese saying that lying is acceptable under only two circumstances: to save a life or to flatter a woman. Trust is all-too-important in a relationship. If the individual tells a serious lie to your client once, how can your client trust that individual won’t make a practice of lying in other cases when it suits them?

13. People often describe themselves when they’re describing others.

This isn’t always true, but if the new individual in your client’s life continuously describes others as dishonest, double-dealing, irresponsible, malicious or even evil or murderous, your client has reason to examine whether that individual may be projecting. I know of a case in which a woman’s fiancé talked about how his ex was trying to kill him. The end of that engagement came when she learned that her fiance kept a gun by his bedside table, and after one bitter argument, she ended up fleeing from him, terrified for her life. She told me that she felt that everything he had said about his ex-wife’s being violent and murderous turned out to be a perfect description of himself.

14. The nicest clients need to be the most vigilant. 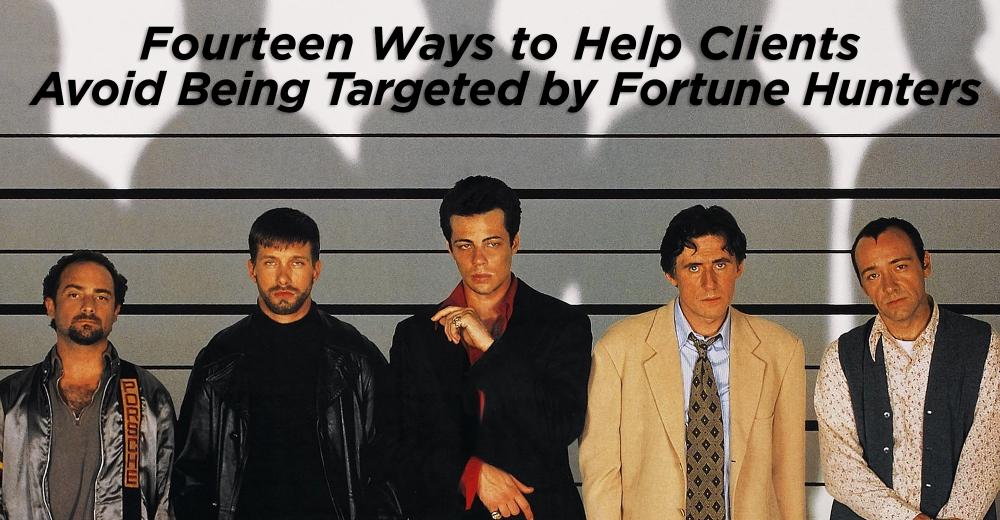