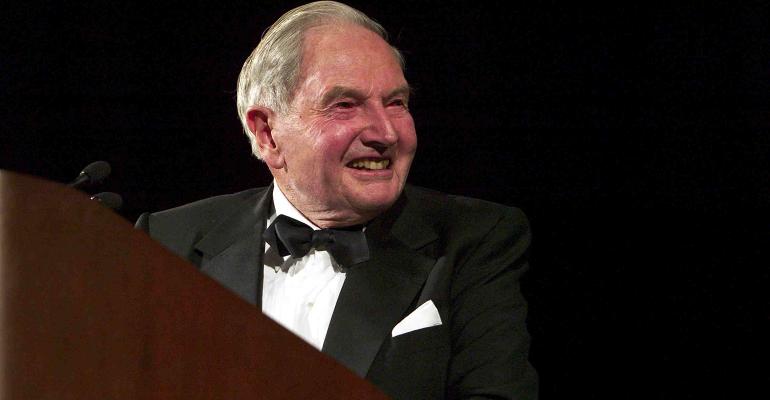 The last surviving grandchild of John D. Rockefeller had a long-standing affinity for modern art.

(Bloomberg Businessweek) --David Rockefeller kept a $90 million Picasso nude in his living room, wedged between windows that overlooked East 65th Street. For him, art was meant to be lived with, not hidden away.

Rockefeller, the last surviving grandchild of Standard Oil Co. founder John D. Rockefeller, had a long-standing affinity for modern art and spent the better part of a century collecting works by Paul Gauguin, Diego Rivera, Henri Matisse, and others. He was born wealthy, but over time his habit contributed significantly to his personal fortune.

Particularly in the last decade of his life, as values in the art market ballooned, his paintings began to “constitute a very good portion of his personal estate,” says Peter Johnson, the Rockefeller family’s official historian. Starting on May 8, when Christie’s will auction off the collection over the course of a week of blockbuster sales, we’ll find out just how big that portion is.

When Rockefeller died last year at the age of 101, his collection included at least four paintings by Claude Monet; stunning works by Edward Hopper, Georgia O’Keeffe, and Georges Seurat; and hundreds of other treasures, including a dinner service Napoleon took with him into exile on Elba.

Some of the objects were purchased for pennies, compared with their worth now. “I think David expected that the value of a Picasso would increase from 1967,” Johnson says. “Did he think it was going to increase a thousand times? No.”

Rockefeller’s wife, Peggy, died in 1996. Together, they’d planned on donating most of their personal wealth to charity. Decades ago, they arranged for 13 works to go to New York’s Museum of Modern Art, which was co-founded by his mother, Abby Aldrich Rockefeller. But in the long run, Rockefeller determined that most organizations needed his money, not his art.

So, with the exception of a few individual bequests—the Metropolitan Museum of Art in New York got a painting by Edouard Manet, for instance—he decided that his collection, along with everything else, would be sold. The proceeds will go to 11 named organizations, including Rockefeller University, Harvard University, the Maine Coast Heritage Trust, and the Council on Foreign Relations. Per the will, a number of other charities will also benefit.

Ultimately, the decision to sell the art after Rockefeller’s death came down to taxes. “A lot of the art was purchased for good prices in the 1940s, 1950s, and 1960s,” Johnson says. “But the art market just went bonkers since then.” The Rothko that Rockefeller sold in 2007, for instance, realized a profit of about 730,000 percent. “You can imagine what the capital gains tax was,” Johnson says. So Rockefeller stuck to his original plan: to leave the art in his estate and donate the proceeds to charity. That way, Johnson says, “there was no tax to them.”

After that, it was up to a team of professionals, armed with the ever-expanding valuations of Rockefeller’s holdings, to make it happen. Given the scale of the estate—there are 67 dinner services, for instance, not to mention an immensely valuable collection of wooden duck decoys—cataloging all of it and figuring out how much it could be worth was a herculean undertaking.

“This was something that was negotiated a while ago,” says Jonathan Rendell, the deputy chairman of Christie’s Americas. “We’d known for five or six years that we would at some point be handling the sale, and we’d been doing valuations for something like 20 years, helping them set up data banks to record everything that’s in the collection.”

Over the years, the Rockefellers chipped away at their estate by giving presents to their children and grandchildren and donating copious amounts to charity. Christie’s has broken down what’s left into more than 1,500 lots, which will be sold in multiple live auctions over the course of a week. Lower-priced lots will be offered for sale online.

The working estimated value of the estate is $500 million, but that number was applied five years ago, well before a work by Leonardo da Vinci sold at auction for $450 million, showing that the global market has a voracious appetite for rare treasures. The top handful of lots in themselves are now expected to get close to that mark. “We’re always saying, ‘Masterpiece!’ at the drop of a hat. In this particular case,” Rendell says, the collection “has real, true masterpieces.”

Christie’s anticipates that bidding for Picasso’s haunting Young Girl With a Flower Basket, a rare vertical panel from the artist’s Rose Period, will range from $90 million to $120 million. That might sound high, but it’s relatively conservative, given that the most recent equivalent sale was 14 years ago, when Picasso’s Boy With a Pipe, painted in 1905, sold for $104 million at Sotheby’s in New York. Christie’s expects bidding for a Monet water lilies painting (1914-17) to be in the range of $50 million to $70 million, which is also fairly restrained: The house sold a water lilies painting half that size for $43.7 million in 2012.

It’s also worth considering the value of the Rockefeller name, which could add significantly to the works’ totals. In an era when many masterpieces end up in Swiss free ports, these were paintings that Rockefeller lived with on a daily basis. “Some paintings were absolute favorites,” Johnson says. “Picasso’s Girl With a Basket of Flowers—I’m not so sure his wife liked that, but he did.”

A Matisse from 1923, Odalisque Lying With Magnolias, “was another painting he admired dramatically, at least partially because he met Matisse a couple of times when he was young, in the 1930s,” Johnson says. Christie’s anticipates interest in the range of $70 million to $90 million for that work, which reflects the general consensus that it’s one of the artist’s best paintings. The auction record for a Matisse painting is $46 million.

Rockefeller also “adored” a painting by Gauguin from 1888, The Wave, Johnson says, in part because it matched the colors of his library walls in New York. Christie’s estimates bidding for it will be about $12 million.

The executors of Rockefeller’s estate are just as motivated as the auction house for the sale to go well, given that “in his will, he had specific numbers that would go to each of these charities,” Johnson says. If the sale falls short at fulfilling those amounts, executors will have to draw on other parts of the estate to meet the goal. Regardless, the sale will represent one of the largest single liquidations of a personal fortune in American history.

“Rockefeller didn’t buy something because it was a really great price,” Johnson says. “He bought paintings because they appealed to him in some way. If the price was low, though, he liked it even more.”