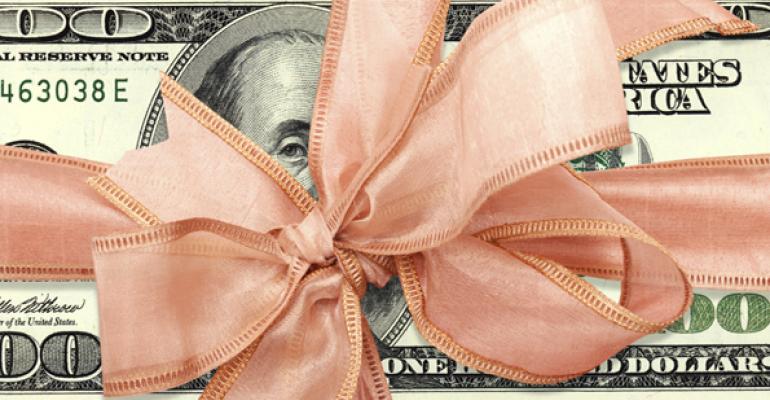 A charitable gift annuity can provide a surrogate for fixed income during retirement in an environment of low interest rates that may linger for decades.

Most of today’s pre-retirees are learning that replacing their employment income isn’t as simple as it was for previous generations, who benefited from a funded defined-benefit (DB) plan. With DB plans largely becoming extinct, many advisors believe a 4 percent systematic withdrawal from a diversified portfolio of stocks and bonds was an optimal approach for inflation-protected retirement income; however, several credible academic professionals and certified financial planners have challenged this “rule of thumb” as a plan that can utterly fail depending on the timing of when an individual retires.

Most retirees want guaranteed lifetime retirement income but don’t know how to make it happen. A recent study by TIAA-CREF says 84 percent of adults polled want a guaranteed income stream in retirement, and 46 percent are concerned they’ll run out of money. Low rates force risk-averse investors to chase returns in equities or over-allocate in long-term bonds, both of which impose a high sequence-of-returns risk for retirees.

However, only 14 percent have purchased some type of a guaranteed annuity to secure a steady stream of lifetime income.

So, what prevents retirees from annuitizing (using a lump sum to purchase a guaranteed life annuity payment)?

As a result, most retirees avoid annuitization, even though it’s a tool to replace a lack of a DB pension income. You may be able to help your client overcome whatever their skepticism or misinformation on annuitizing by suggesting they partner with charities important to them by using charitable contributions to create future retirement income. Most individuals are less concerned about getting their full income out of the annuity contract and the other problems cited above if they know a charitable organization they care for may benefit.

Although a charitable gift annuity (CGA) functions in much the same method as other split-interest gifts, it isn’t technically categorized as a deferred gift. A CGA is a bargain sale transaction in which the taxpayer transfers cash or other assets to a charitable organization in return for the charity’s promise to make annuity payments to one or two individuals for their lifetimes. CGA payments are backed by the general assets of the charity, as opposed to other life income arrangements (such as charitable remainder trusts), in which distributions are made from the trust principal.

Most charities determine the annuity payment based on rates published by the American Council on Gift Annuities. These rates in turn are based on the age of the annuitant(s) and certain expectations with respect to the rate of return earned by the institution.

Here are the most common CGA income arrangements, listed by popularity:

Immediate: Begins annuity payouts within one year from the date of gift.

Deferred: Begins payouts more than one year from the date of the gift.

Flexible: A form of deferred annuity in which the annuitant chooses the payout starting date, and based on that date, the annuity payout is adjusted using a present value computation depending on the actual date selected. The longer the annuitant delays receiving the income, the higher the rate. This arrangement is ideal for donors who are still working and don’t know for certain when they’ll retire. Unlike qualified retirement vehicles, there are no contribution limits on CGAs.

Commuted: A deferred annuity scheduled to begin initial lifetime payouts at a later date for the life of one or two individuals and typically commuted so the lifetime payouts from a present value calculation are compressed into a shorter period of time. For example, a grandmother may invest in a CGA with her alma mater for her one-year-old grandson and schedule payouts to begin on the grandson’s 18th birthday and continue for the next four years.

Step: This annuity may provide for payment of an amount that escalates each year. Because the valuation process for an annuity involves a straightforward discounting of a stream of future payments, and as long as the amount and timing of each payment is known in advance, it can be discounted accurately. Thus, an annuity can be designed to escalate each year or at other predetermined intervals. The critical requirement is that the changes or steps be fixed in advance and not be susceptible to manipulation or change.

The donor of a CGA is entitled to an income tax charitable deduction equal to the difference between the value of the property contributed to the charity and the present value of the annuity. The valuation of an annuity depends on the:

If CGA payments are to be made to anyone other than the donor, the annuity is a taxable gift from the donor to the annuitant, and a gift tax will be imposed on its value. Most annuity contracts allow the power to revoke such payments for this reason so an eminent gift tax isn’t triggered at the inception of the contract. An annuity is considered to be non-assignable even though the taxpayer retains the right to revoke a successor annuitant’s interest and even though the taxpayer may release their right to future annuity payments in favor of the charity.

Investors who are philanthropic should consider exploring the various current and deferred arrangements that can be designed using CGAs. Even if there’s a low probability a client will run out of assets during retirement, every retiree only gets one opportunity for a successful retirement and to leave a charitable legacy.

This article was modified from the original Trusts & Estates article, "CGAs: A Surrogate for Fixed Income During Retirement."