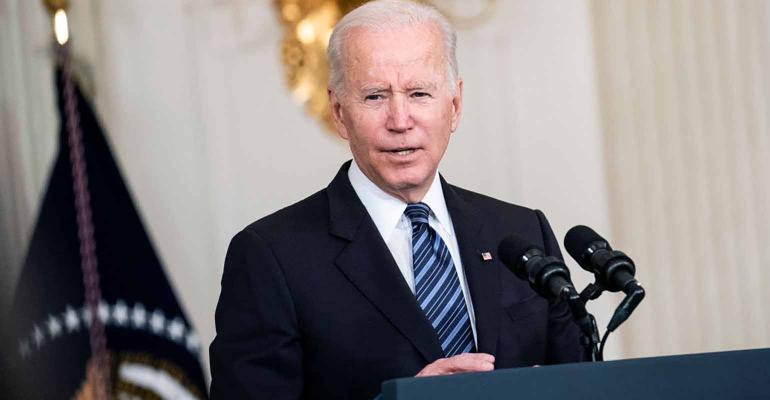 The Build Back Better Tax Alarmists Who Cried Wolf

Turns out the sky is NOT falling, but it’s best to be prepared for it.

As the old saying goes, economists have predicted 27 of the past five recessions. That’s how I feel about all the handwringing over President Joe Biden’s massive infrastructure and tax plan.

While it’s popular in the media (and on Capitol Hill) to bash those with 8- , 9- and 10-figure net worths, the sky isn’t exactly falling for the wealthy. Many of the fears about substantial changes to upper-income tax brackets, estate tax exemptions and trusts didn’t even make it into the House Ways and Means Committee’s recently passed Build Back Better (BBB) plan. And that’s before the 50/50 Senate gets to work on it. Still, it pays to get out in front of proposed changes since they could become retroactive if enacted: 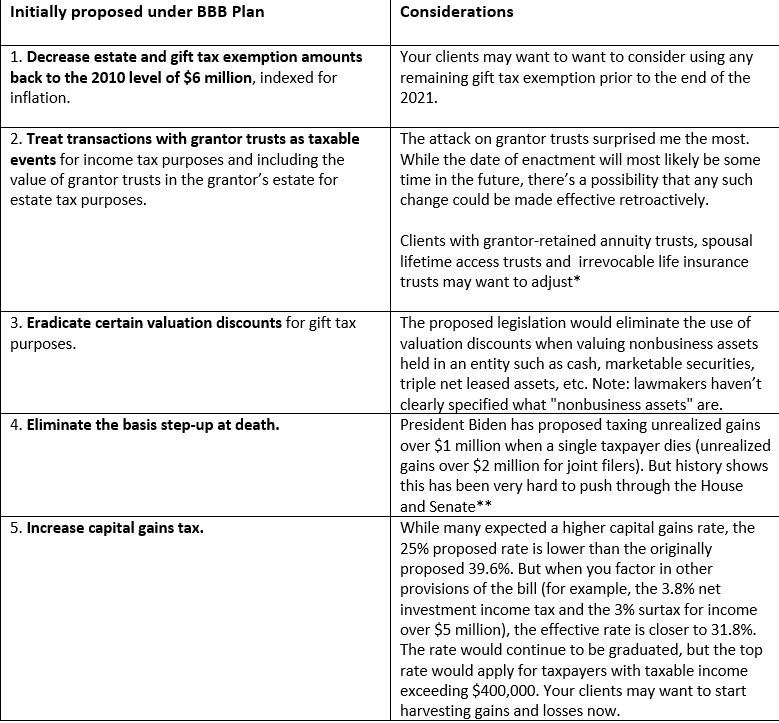 * Clients who’ve funded GRATs with highly appreciated assets may want to swap low-basis assets with high-basis assets to reduce the possibility of gain resulting from the annuity payment.
If a SLAT is established after the enactment date of the proposed law, it will likely be included in the grantor's estate on their death. Clients with existing life insurance trusts may want to consider prefunding all future premium payments to avoid this outcome. Clients with existing grantor life insurance trusts may seek to modify such trusts to make them nongrantor trusts prior to the enactment date of the proposed law.

** The Tax Reform Act of 1976 imposed carryover basis for inherited assets—meaning, taxpayers inheriting assets with a capital gain would also inherit the asset’s original basis (as opposed to the stepped-up basis under current law). The tax would become due when the asset was sold, just like for any other capital gain. This change never took effect, however; by 1980, Congress retroactively repealed and replaced it with the rules that still exist today.

Where We Stand Now

This much we do know: Last week (Nov. 19), the House voted to pass the BBB plan at a massive cost of $1.7 trillion, but down substantially from the originally proposed $3.5 trillion price tag, and things are likely to change further during Senate negotiations. The House version would be paid for via a mix of taxes on the wealthy and businesses, including the “income surcharge tax” on the ultra-wealth that includes:

So, it seems trusts, estates and businesses would be taking it on the chin more than individuals under the BBB plan. Aside from a few highly compensated corporate executives, athletes and entertainers, the proposed surcharges, if enacted, are likely to affect two types of taxpayers:
(1) entrepreneurs who are selling a business, and
(2) Nongrantor trusts.

Again, these surcharges are merely proposed as we go to press. Even if passed by the house, the Senate may remove them from the final bill

There are also proposed changes for those holding very large retirement accounts but not until 2029. That’s when taxpayers earning more than $400,000 (or $450,000 for joint filers) who have a combined traditional IRA, Roth IRA and defined contribution retirement account balance exceeding $10 million would be required to withdraw half of their balance over $10 million. And for those with retirement plan balances over $20 million, 100% of the excess over $20 million would have to be withdrawn from Roth accounts. Further, high-income taxpayers wouldn’t be permitted to contribute to traditional and Roth IRAs if the aggregate balance of a taxpayer’s retirement accounts exceeds $10 million.

On the flip side, the BBB plan would make a concession to property owners in expensive housing markets—particularly in the coastal blue states. The $10,000 cap on state and local tax (SALT) deductions—aka the “Trump penalty”—would be increased to $80,000, which would be applicable in 2021 and continue through 2030.

While Biden will need at least 10 Republicans to cross the aisle to pass any measure, the Democrats could attempt to pass the BBB plan through “budget reconciliation,” which only needs a simple majority for passage. However, it doesn’t look like the BBB plan would receive unanimous Democratic support in the Senate. Just remember tax legislation tends to be “prospective” (that is, it won’t be effective until Jan. 1, 2022, or later). But sometimes, it’s retroactive, which means it could be effective as of the date of introduction.

What should affluent taxpayers and their advisors be doing (if anything) before year-end?

It’s still wise to plan as though change is coming. Eventually it will, and you don’t want your clients getting caught short-handed. It’s never too early to do good planning. I remember when President Reagan’s landmark Tax Reform Act of 1986 was passed. Everyone was nervous. There were sweeping changes proposed. We spent hundreds and thousands of dollars with the tax reference publishers to get up to speed. We studied those texts diligently and did our best to prepare our clients for tax Armageddon. Tax shelter investments disappeared overnight, but most of the other frightening provisions never passed. But they keep resurfacing.

Between COVID-19 stimulus plans and Biden’s massive infrastructure plan, the government will be looking for all manner of ways to pay for it. In the years to come, I expect higher income tax rates over a certain AGI and higher corporate taxes. I also foresee more aggressive taxation on business gains as we have a perfect storm of owners exiting: aging boomers + threatened tax legislation + continued supply chain headaches. Ouch!

When it comes to estate, gift and tax planning, I still say better safe than sorry. When working with affluent, successful clients who have a great deal of complexity in their lives, it’s best to get the ball rolling ahead of the fact so you’re not playing catchup if the rules of the game suddenly change on you. If the tax man didn’t get you this time, it doesn’t mean he won’t try again next time. While most households will continue to have a total net worth less than the proposed exemption amounts, cutting the current exemption amounts in half (or more) would impact significantly more families.