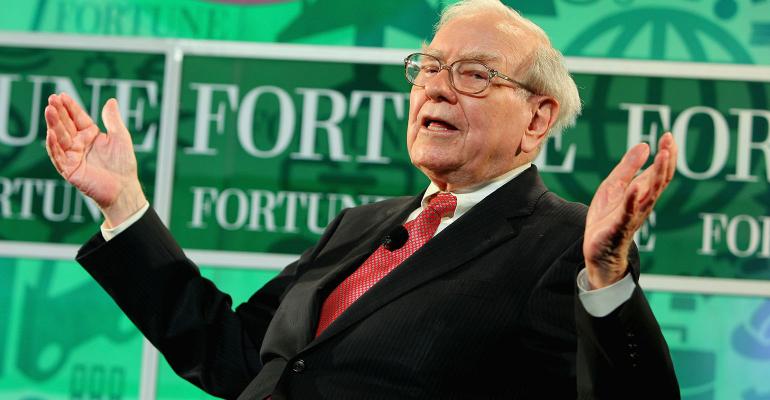 Buffett Nears a Milestone He Doesn't Want: $100 Billion in Cash

Because Berkshire Hathaway doesn’t pay a dividend and rarely buys back its own stock, Warren Buffett is on the hook to find ways to invest those funds.

Berkshire Hathaway Inc., the conglomerate he’s run for more than five decades, reported Friday that it held just shy of $100 billion in cash at the end of the second quarter.

While that figure highlights the staggering money-making ability of the businesses he’s collected over the years, it’s also a burden. Because Berkshire doesn’t pay a dividend and rarely buys back its own stock, Buffett is on the hook to find ways to invest those funds.

“To put that money to work would be great,” said David Rolfe, chief investment officer at Wedgewood Partners, a money manager overseeing about $6 billion including Berkshire stock. But the “list of companies that he would like to own is very, very small.”

Buffett, 86, addressed the mounting cash pile at Berkshire’s annual meeting in May, saying he hadn’t put his “foot to the floor” on an acquisition for a while and shouldn’t keep so much money earning next to nothing for long periods. The war chest includes some cash-like securities, such as Treasuries.

“The question is, ‘Are we going to be able to deploy it?’” he told the thousands of shareholders gathered at the CenturyLink Center in Omaha, Nebraska. “I would say that history is on our side, but it’d be more fun if the phone would ring.”

Buffett has been finding a few places to invest. He built a holding in Apple Inc. through the beginning of this year. Then, in June, Berkshire made two smaller equity investments. One was a stake in a real estate investment trust and the other propped up Home Capital Group Inc., an embattled Canadian mortgage lender.

Most significantly, Berkshire’s utility arm struck a deal last month to buy Texas’s largest electric utility for about $9 billion. The transaction its being challenged by Paul Singer’s Elliott Management Corp., but completing it would make a sizable dent in the cash hoard.

Lots more is bound to pour in. Berkshire posted $4.26 billion in net income for the second quarter. The results were down 15 percent from a year earlier, partly on an underwriting loss at insurance businesses. But a number of Berkshire’s other subsidiaries -- from railroad BNSF to its collection of manufacturing businesses -- posted gains.

Part of Buffett’s challenge in finding new investments may be the years-long bull market. With stocks regularly setting records, it’s simply harder to find attractive deals, said Jim Shanahan, an analyst at Edward Jones. The growing cash pile is also a sign of Buffett’s willingness to wait for the right opportunities.

“It’s not a cause for alarm,” Shanahan said. Over the next few years, “they’ll make some really interesting investments.”

One thing that could accelerate Berkshire’s spending is a correction -- or even a bear market, said Bill Smead, who oversees about $2.2 billion including Berkshire shares at Smead Capital Management. In the past, Buffett has pounced when companies or the broader economy runs into trouble, making investments on favorable terms.

If that happens, said Smead, “he’s in a perfect spot.”