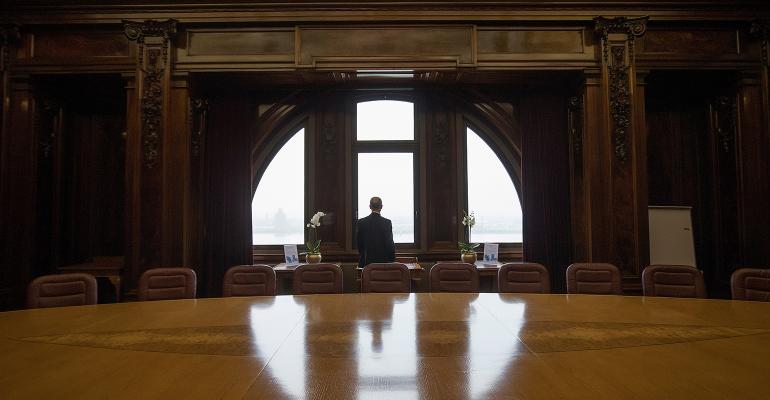 Billionaires at the Gate: Ultra-Rich Muscle In on Private Equity

In an era of hyper-affluence, JPMorgan and Credit Suisse cater to a super-exclusive class.

By Simone Foxman and Sonali Basak

(Bloomberg) --America’s last Gilded Age had its “List of 400”: the people said to be worthy enough, or at least rich enough, to climb the pinnacles of high society.

Related: The Prospects of Private Equity

Today, in an age of affluence not even the Astors and Vanderbilts might have imagined, there is something closer to a List of 55.

Its members are so rich that, in rarefied corners of Wall Street, they seem less like actual people than vast investment empires. Their ranks include familiar names like Bezos and Dell, as well as a growing number of lesser lights whose dynastic wealth is reshaping global business, if not capitalism itself.

This unofficial list represents the first, rough cut of the most sought-after banking clients at JPMorgan Chase & Co., and it is by no means complete. To the contrary: The List of 55 is only the beginning.

Around the globe, bankers are vying for the world’s hyper-wealthy as never before. And they are holding out investments that are tantalizingly off-limits to the rest of us, behind a velvet rope of bespoke investment banking.

This is how the super-rich keep getting super-richer. Anyone can buy stocks. Only a privileged few can bankroll multimillion-dollar ventures or buy entire companies. Private equity—that lucrative and, at times, controversial force of modern finance—has become a playground of the new aristocracy.

It was bound to happen. Like so many things, investing is becoming increasingly stratified. Private bankers now say that entry-class “rich” starts at about $25 million. But you need more than that—typically at least 40 times more, or about $1 billion—if you want a ticket into serious deal-making.

Read more: How Rich is ‘Rich’? Here Is the Number That Buys a Ticket In

Yet, on another level, the rich-ification of private equity harks back to another time. This era of extreme wealth and extreme inequality is minting private dynasties that rival public corporations. On Wall Street, many executives expect the billionaire-whisperers, like merchant bankers of old, to accrue even more financial power.

Some of the people who tend these family fortunes say privately that bankers can seem irrelevant. They say their success doesn’t hinge on the banks.

The worn-out trope—this is a new Gilded Age—may not be far off. Not since the days of John D. Rockefeller has so much been owned by so few.

“This is a new world that’s been around, basically, forever,” said David Dwek, head of private sponsors at Morgan Stanley. “They are an important part of the deal ecosystem.”

Wealthy families have always been choice clients for bankers. Today, major banks woo billionaires and their family offices much the way they do multinational corporations or deep-pocketed institutional investors. Services range from advising on mergers and acquisitions to arranging financing for portfolio companies to providing counsel on expanding or selling family businesses.

Around the globe, bankers are vying for the world’s hyper-wealthy as never before

Granted, investing is a risky business, even for billionaires. The recent implosion of Steinhoff International Holdings NV, for instance, cost the South African tycoon Christo Wiese, the company’s biggest shareholder, the equivalent of more than $3 billion in net worth, according to the Bloomberg Billionaires Index. Banks that lent Wiese money against his stock have lost roughly $1 billion.

Still, with so much money and influence at stake, bankers are pitching hard. Goldman Sachs Group Inc. has its own list of 60, counting among its clients the Reimann family’s JAB Holding Co. and the Koch brothers’ investment firm. JPMorgan, in addition to its initial 55, is watching several hundred families that are poised to enter this rarefied realm.

Over at JPMorgan, bankers in April arranged financing for an acquisition of Texas-based food company C.H. Guenther & Son by PPC Partners. The investment company is controlled by the Pritzker family, one of America’s richest clans.

Paul Carbone leads PPC with Tony Pritzker, and together they focus on North American companies valued between $100 million and $750 million. Carbone, formerly managing partner of the private-equity group at Robert W. Baird & Co., said PPC doesn’t rely on bank-led auctions to source most of its deals. Rather, banks tend to serve as intermediaries and pitch firms such as PPC to business owners looking to sell or expand. The banks’ goal, as he put it: “to put people together who have like interests, in a very old-world sort of way.”

“We’re trying to reach people where they’re most passionate”

Credit Suisse, which has also advised PPC, went as far as to organize an event in Detroit to nurture ties with Daniel Gilbert, the founder of Quicken Loans Inc., and other super-affluent types. (Gilbert, who co-hosted the event, is worth more than $7 billion, according to the Bloomberg Billionaires Index.) Representatives of 43 families worth a combined $75 billion attended the May 2017 event. The official topic was revitalizing Detroit. If Credit Suisse drummed up business, so much the better.

Credit Suisse was already financing mortgage originations for Quicken Loans. But the bank sees its relationship with Gilbert as valuable even beyond his company, said Charles Buckley, head of ultra-high net worth coverage for North America.

Buckley now oversees a $3 billion portfolio of loans made chiefly against billionaires’ stakes in private companies, as well as a team of 20 bankers.

“It could be a block trade one day, and they may want to tap into public markets another,” said Shideh Theunissen, Buckley’s lieutenant.

It’s almost impossible to put a specific number on the money that’s at stake. The Pritzkers’ PPC Partners, Paul Allen’s Vulcan and Stone Canyon Industries, backed by Michael Milken, are among the more recognizable names. Many others fly under the radar. And not all billionaires are looking to acquire companies or take stakes in private ventures.

Still, activity has been heating up, particularly in middle-market transactions. The value of deals done by family offices jumped to $100.6 billion in 2016, from $25.1 billion five years earlier, according to PitchBook data.

Private bankers now say that entry-class “rich” starts at about $25 million. But you need more than that if you want a ticket into serious deal-making.

Major banks must compete with an established cast of specialized boutiques. Byron Trott, known for his long-term links to Warren Buffett, caters to the world’s wealthy; his firm, BDT Capital Partners, has used its connections to raise billions for private-equity funds.

One of the grand old names in banking, Rothschild & Co., has also been expanding lately, with an eye toward the ultra-rich. It helped the Koch brothers finance Meredith Corp.’s takeover of Time Inc. last year. Another boutique, Moelis & Co., has won the favor of hedge fund manager-turned-Sears Chief Executive Officer Edward Lampert, as well as casino mogul Steve Wynn. Aryeh Bourkoff’s LionTree Advisors works closely with the tycoon John Malone.

Bigger banks still are trying to adjust to the new realities. Over the years, even as rich lists exploded, many large global banks became so fragmented that billionaires simply outgrew them and hired their own investment professionals. In the past, many bankers were so focused on corporate clients and other big institutional investors that they largely ignored individual fortunes. Investment bankers might even drop a billionaire’s family office as a client, figuring that pitching deals to it wasn’t worth the hassle.

No more. “From our perspective, they’re No. 1 or No. 2 on a call list,” said Todd Stevens, head of the key client partners business at Deutsche Bank.