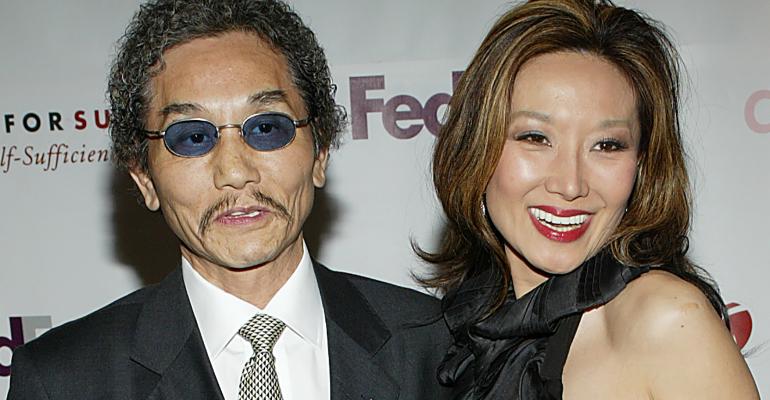 Rocky Aoki's heirs seek removal of their stepmother as trustee of $50 million trust.

In the continuation to a decade’s long family feud, DJ Steve Aoki, 42, and his model/actress sister Devon Aoki, 36, heirs to the Benihana fortune, are suing to remove their stepmom as trustee of their estimated $50 million trust fund.

Benihana, a highly successful Japanese steakhouse chain, is the brainchild of Hiroaki “Rocky” Aoki. In addition to being a restaurateur, Rocky was also known for some other eccentric endeavors, including a pornographic magazine akin to Playboy. Rocky had also earned himself a reputation not unlike Playboy’s Hugh Hefner—he once proudly boasted that he fathered three different children from three different women at the same time.

It’s not surprising then that Rocky, who had a total of six children from numerous women, became embroiled in a lawsuit over their inheritance while he was still alive. According to a story in New York magazine, in 1998, while facing charges of insider trading (on which he was later convicted), Rocky’s attorney advised him to place all of his Benihana assets in trust.

The New York Magazine article goes on to explain that four of the children, not including Devon and Steve, weren’t smitten, to say the least, when he remarried, accusing his newest wife, Keiko Aoki, of being a gold digger. They insisted she sign a postnuptial agreement, which she refused, leaving them to convince Rocky to make all his kids the sole beneficiaries of his trust. In an attempt to make everyone get along, Rocky rewrote his will, “giving Keiko control over how to disburse 75% of his estate to his children after his death.” (He also changed his will on numerous other occasions afterwards, but let’s skip those details for the sake of brevity). The logic was that this would cause everyone to get along, with the fate of their inheritance in Keiko’s hands. As any seasoned estate planner could predict, that plan backfired big time, fueling the feud. Rocky eventually sued the four children, accusing them of attempting to take control of his companies, and disinherited them.

This leaves us with Devon and Steve, who are both successful in their own right (and perhaps the reason why they initially sat out on the family drama). Since their father’s death, however, the two have been embroiled in their own fair share of litigation with Keiko, including a favorable decision that they’re the rightful heirs to their father’s fortune (but they don’t have access to their money until each turns 45).

Following up on a previous action demanding an accounting of the trust fund, they’ve now filed an action in New York Surrogate’s Court to remove Keiko as trustee, according to the New York Post. They’re accusing her of wasting away millions of dollars of their inheritance, including millions spent on what they call her “reckless litigation.”

Whether they can prevail on this matter hinges on Steve and Devon’s ability “to show that she committed breaches of trust that rise to the level of justifying removal,” says Todd A. Flubacher, a partner at Morris, Nichols, Arsht & Tunnell, LLP in Wilmington, Del., “A trustee has fiduciary duties of loyalty and care that are owed to the beneficiaries.” The burden of proving any breach of those duties or other carelessness and self-dealing on Keiko's end is on Steve and Devon.

“Generally speaking, there is a fairly high bar for removing a trustee from office and it can be difficult to establish conduct that is so egregious that it warrants removal, particularly in regard to investment decisions. Also the standard for removal may differ from jurisdiction to jurisdiction. It can be easier to prove in some jurisdictions than others” Flubacher explains. He also mentions that the issues will always depend on language found in the trust instrument—any language that addresses the standard of liability applicable to the trustee or the standard for removal has to be taken into account.