McMullen is the top county to benefit from the shale oil discovery in South Texas.

This rectangle, about 70 miles northwest of Corpus Christi, is home to 8,000 living people and, in Boot Hill Cemetery, dead ones who saw violent ends and were — as the saying goes — buried “with their boots on.” The average AGI in McMullen County per federal return in 2015 was a whopping $303,717, according to a database search on the Transactional Records Access Clearinghouse (TRAC).

“A lot of old Texas families live on large ranches in McMullen County, and the older generation went through tough times prior to five years ago,” said Thomas Tunstall, research director for the Institute for Economic Development at the University of Texas at San Antonio, in an interview with Bloomberg.

In Wyoming’s Teton County, getting by means looking out for moose attacks — and collecting lots of dividends. The county had an average dividend income per federal taxpayer of $36,617. That towers above the Wyoming county with the next-highest level of dividends, Sheridan County. There the average is $3,892.

It’s also home to Jackson Hole valley, one of the most challenging ski areas in the country. Many of the country’s wealthiest own property in the area, where they love spending their winters (and taking advantage of the lower taxes).

Not surprisingly, New York is near the top of the list, with its rich Manhattanites and bustling financial markets.

Home to the second largest oil field in the U.S. by remaining reserves, Glasscock is another Texas county to benefit from the oil boom.

This 900 square-mile patch of land has an estimated population of about 1,300. Wages and salaries in the county average $41,170.

Many of Silicon Valley’s tech-made millionaires move to Marin, located just across the bay from San Francisco.

It’s home to a few billionaires outside of the technology industry as well who bring up the average, including Daniel Pritzker, heir to the Hyatt fortune, and filmmaker George Lucas.

Fairfield County is where many rich Manhattanites move when they want a house and more space. It has the fourth highest average wages and salaries in the country at $90,727.

It may surprise you that this quiet, rural North Dakota county made the top 10, but the state is second only to Texas in oil production. And McKenzie, of course, is the top oil-producing county in the state, producing over 10 million barrels per month, according to North Dakota drilling and production statistics.

In this area, it’s hard to tell an oil millionaire from a regular Joe. Folks may find it difficult to reconcile the newfound oil money with the area’s farming roots. That new dynamic is causing big change in small towns.

With San Francisco bordering this bay area county to the north and Silicon Valley to the south, it’s no doubt this county is at the center of technology wealth.

You’ll find the corporate headquarters for Oracle Corporation, Visa, Sony Computer Entertainment America, Electronic Arts, YouTube, Genentech and Gilead Sciences. And at the eastern edge of the county is Menlo Park, where many venture capital firms reside on the famed Sand Hill Road.

San Mateo has the third highest average wages and salaries in the country at $93,101.

This ski resort county, which includes Aspen, draws some big bucks. Similar to Jackson Hole, billionaires come to Aspen as a winter retreat; at least 50 billionaires own real estate in the county, including the Koch brothers, Amazon’s Jeff Bezos and hedge fund manager John Paulson, according to Aspen Journalism.

The county boasts the third highest dividend income in the U.S. at $19,350.

Last but not least, this Texas county is another one making money off of oil. It’s located at the center of Eagle Ford Shale, the largest oil field in the United States. 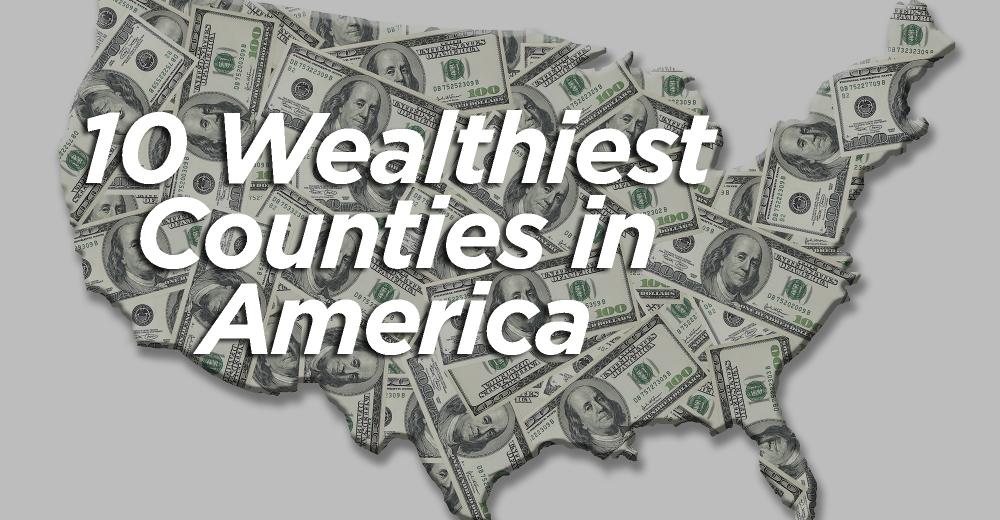