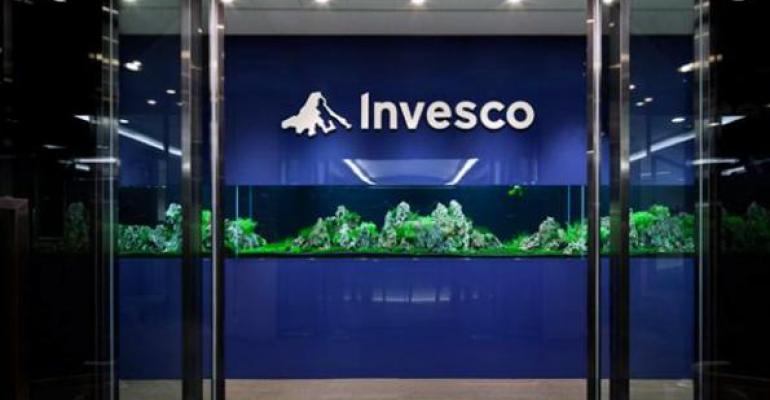 Its merger with OppenheimerFunds offers a way around the Vanguards of the world, but investors have reason to worry. Plus there’s a muni bond twist.

First, the rationale for the $5.7 billion transaction: Active management is losing out to passive, low-fee indexing products, and the remaining stock and bond pickers need to consolidate to stay afloat. Invesco’s deal, which is expected to close in the second quarter of 2019, is supposed to yield about $475 million in cost-savings over two years. It’s the latest move by the Atlanta-based company, which earlier this year closed a $1.2 billion acquisition of exchange-traded funds from Guggenheim Partners. OppenheimerFunds has large stock funds that invest globally and in the emerging markets.

It may be an uphill sell for investors. As Bloomberg News reported, recent efforts by asset managers to grow through mergers haven’t turned out to be immediate success stories. And going at it alone isn’t working well either: Franklin Resources Inc. was downgraded in June by Moody’s Investors Service, which cited “competition with passive products.” It was the first cut to a single-A asset manager’s rating in five years.

One area where Invesco and OppenheimerFunds are well known — and which has proved more resilient than others to passive investing — is in municipal bonds. In particular, they command a large share of the high-yield tax-exempt market. Invesco’s fund is the second largest overall, at about $9.2 billion, while OppenheimerFunds’s is sixth, at $5.9 billion, according to data compiled by Bloomberg. The sheer size is about where the similarities end, though. When it comes to tax-exempt bonds with juicy yields, investors for years were left with a binary choice: load up on Puerto Rico debt, or avoid it if you can.

OppenheimerFunds chose the first strategy. On first glance, it seems to have paid off: the Oppenheimer Rochester High Yield Municipal Fund, with the ticker ORNAX, produced an annualized return of 8.3 percent over the past five years, better than 98 percent of its Bloomberg peers. This year, as fixed-income markets have slumped worldwide, the fund is up 7.8 percent, besting 97 percent of competitors. It helps that Puerto Rico bonds have rebounded in 2018 from record-low levels. 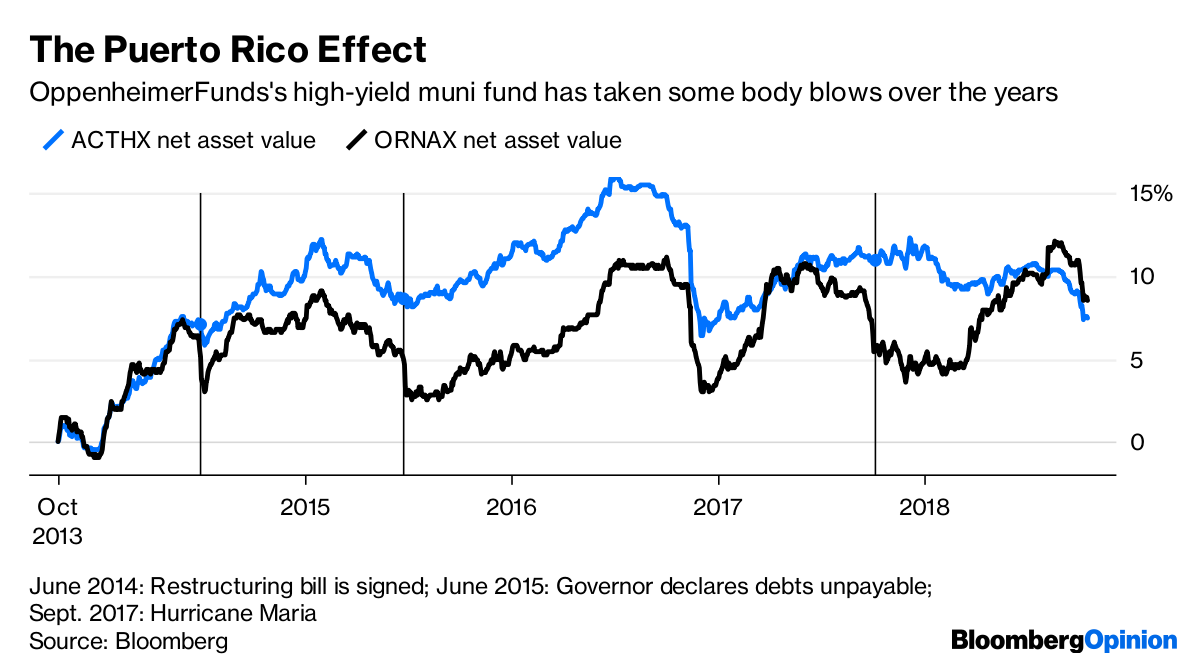 That doesn’t quite capture the whole OppenheimerFunds picture though. I wrote about the firm in December 2015, before Puerto Rico started defaulting in earnest. At the time, 10 of its 20 muni funds had at least a 15 percent stake in junk-rated Puerto Rico, including more than 35 percent in funds that were deemed state-specific offerings for Maryland and Virginia residents. Those were liquidated earlier this year. Both lost money in 2017 even though their peers gained broadly — presumably because Puerto Rico bond prices plunged in the wake of Hurricane Maria.

It’s possible that some of those state-specific offerings would have disappeared anyway as part of the transaction. Many details remain unknown (at least publicly), including how the branding will work. For muni investors, the specifics will be worth monitoring because if Invesco and OppenheimerFunds pooled assets from their two high-yield portfolios, they’d come within striking distance of the $16.8 billion Nuveen High Yield Municipal Bond Fund, run by John Miller.

A simple combination of the Invesco and OppenheimerFunds portfolios might be a nonstarter, given the historical difference in strategy. The Invesco fund, run by Mark Paris and others, has long been a player in so-called project finance deals — think bonds for a nitrogen fertilizer plant in southeastern Iowa or a Louisiana wood-pellet facility. That sort of investing requires site visits and a comprehensive financial analysis of the companies backing the deals. It’s an entirely different exercise to estimate what Puerto Rico’s general obligation pledge is worth and the odds of Congress changing bankruptcy laws. For what it’s worth, both have large holdings of tobacco securities, the frequently traded segment of the otherwise illiquid market.

Regardless of what happens as part of the transaction, the combination of Invesco and OppenheimerFunds will remain a powerhouse in the tax-exempt market. Invesco Chief Executive Officer Martin Flanagan told Bloomberg News that he’s convinced that active funds will continue to play a critical role in the portfolios of retail and institutional customers.

“Investors are looking for a broad range of ways to have us meet their outcomes,” Flanagan said. That looks to certainly be the case for munis if not necessarily for the rest of the market.