Have Bonds Broken to the Upside?

Seen the yield curve recently? If so, you’ve surely noted the downward trajectory of Treasury rates over the past month. 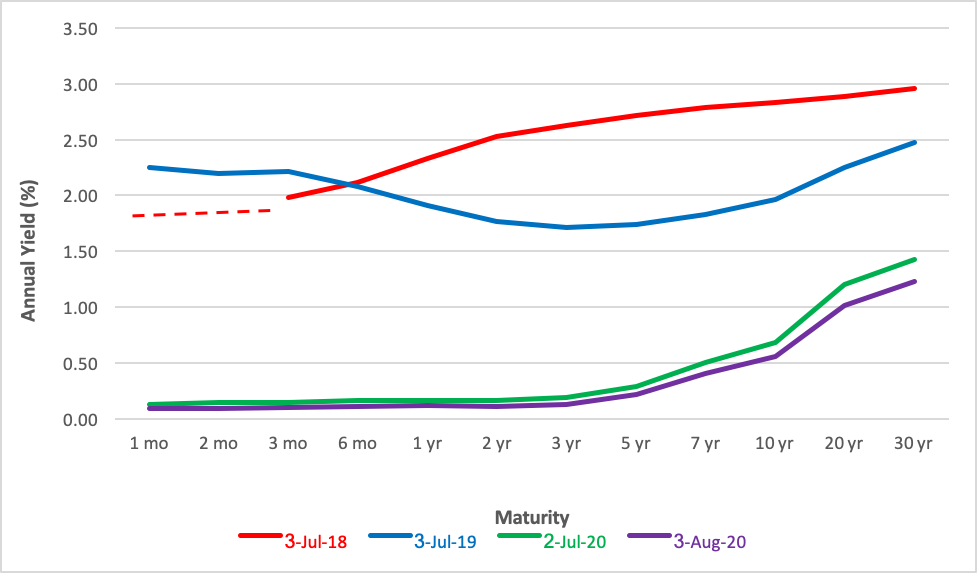 Notice the gap between the green and purple lines? As the coronavirus ran rampant over the past month, the 30-year T-bond yield sunk 20 points. That translated to better than a $6, or 4%, lift in the market price of the iShares 20+ Year Treasury Bond ETF (Nasdaq: TLT), pushing the ETF’s share value to test the upper bound of a consolidation area forming since April.

On the daily chart, a decisive close above $171.29 would represent a breakout for the iShares fund. Well, we got a close above that level on Tuesday, just a tick below the day’s high of $171.58. Was that decisive? On the surface, not so much. It actually led to some backfilling in early Wednesday trading, causing some observers to remark that Tuesday’s market was largely dominated by profit taking. 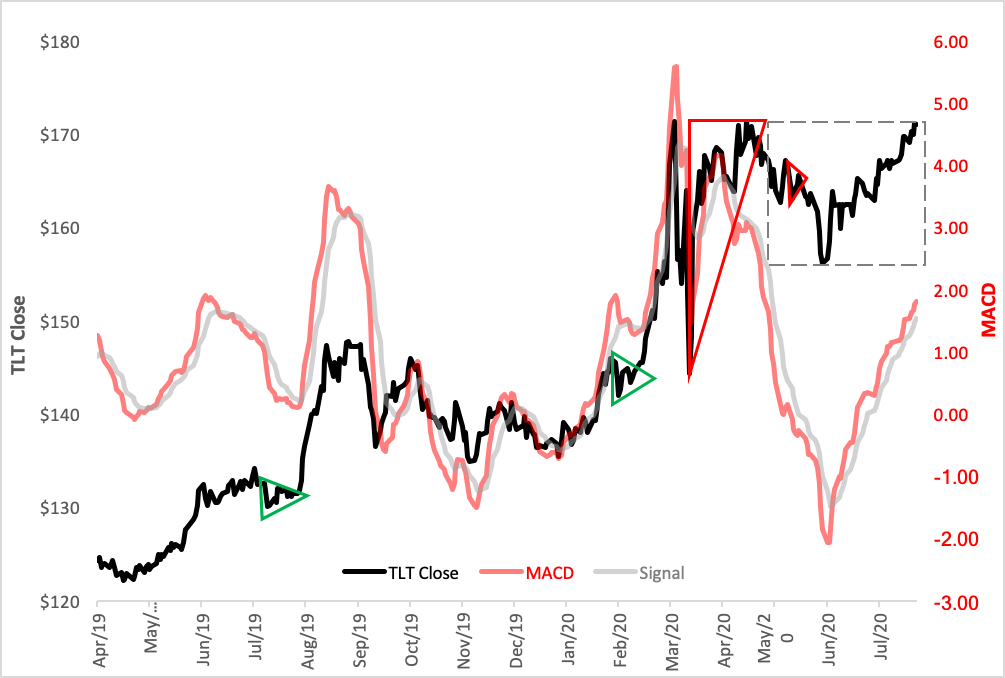 Still, when you sift through the trades by volume, there are signs that new money flowed into TLT—nearly $17 million, in fact. That bolsters the breakout argument.

So, if there’s really been a breach of resistance, where does it lead? Technically, the initial upside target is the $186 level, a further 9% lift. Then, in the longer term, an objective of $193 is in sight.

So, with rates as low as they are now—the long bond yielded just 1.19% as of Tuesday’s close—it’s fair to ask if investors are still inclined to buy enough Treasury paper to push TLT higher.

The facts on the ground seem to indicate the answer is ‘yes.’ The obvious reason is that investors are so nervous they’re willing to accept meager yields because T-bonds are the safest of safe havens for their money. With a guaranteed return of face value at maturity, investors, many of them at least, buy Treasurys for capital preservation rather than yield. There is, of course, the impact of inflation to consider, but that’s a matter we’ll ponder later.

The obverse side of the coin is capital appreciation. Bond prices in the secondary market rise as yields decline. And bond prices have certainly risen while yields have plummeted to record lows. The one-month boost in TLT’s share price attests to that. Appreciation’s an even bigger deal in the longer term. Over the past year, TLT’s price has appreciated at nearly twice the rate of the S&P 500’s.

Which brings us to the issue of hedging. Treasurys are the simplest and safest hedge available to investors. Remember the old 60/40 investment model? It’s not dead. The coronavirus pandemic revitalized interest in classically balanced portfolios. Over the past three years, a balanced portfolio’s realized annualized volatility has been a third lower than that of the S&P 500, resulting in a Sharpe ratio 10% higher than the blue-chip benchmark’s. Over the past year, the Sharpe ratio differential has more than doubled in favor of the 60/40 portfolio.

There are other motivators for holding bonds or bond funds. First of all, there’s the income. For TLT, the trailing 12-month dividend yield is 1.60%. That’s better than any money market fund or one-year CD rate. True, there’s no return guarantee embedded with an ETF investment, but life is full of trade-offs. Think of it this way: You get zero volatility with a CD, but do you also get daily liquidity?

Moreover, bonds can provide an asset stash when rebalancing’s required. If an investor’s committed to maintaining balance in the portfolio, an appreciated asset class can be pared down at a rebalancing date to provide the proceeds necessary to buy more of the lagging assets. Sell high to buy low, remember? Lately, that would have meant that, depending on an investor’s rebalancing frequency, bond or bond fund gains could have been used to buy up slumping equities during the early-year COVID-19 scare.

There’s another advantage to holding bonds: the safeguard against deflation. Inflation’s been on a downward trajectory for some time now. With fits and starts, the annual rise in the Consumer Price Index (CPI) has fallen from 2.90% to 0.60% over the past two years. Inflationary expectations, expressed through the breakeven inflation rate (BEI) are rising, but those are just beliefs. Often, such outlooks are dashed by economic realities. In a deep recession, the prospects of which rise by the day, deflation risk rises. 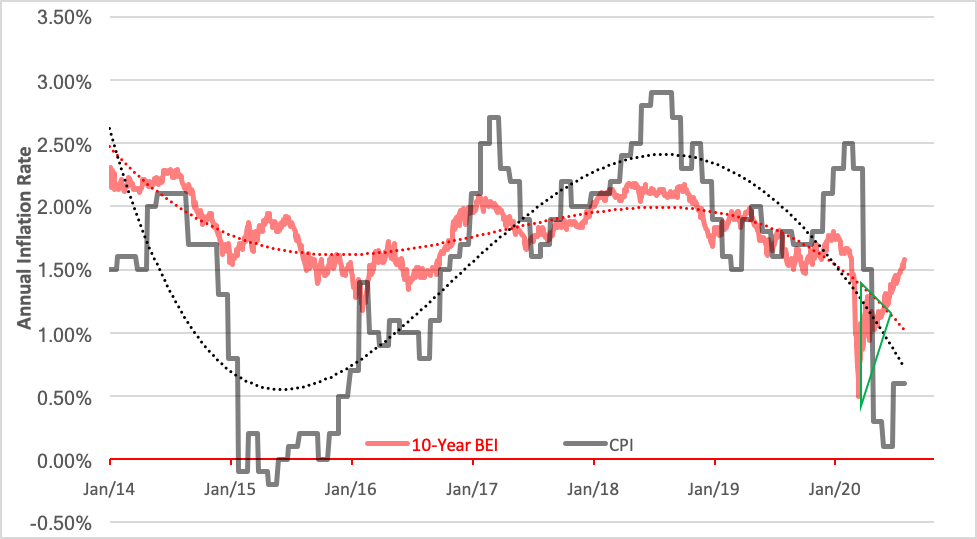 Inflation ravages bond returns. While the return of a Treasury security’s face value is backed by the full faith and credit of the national government, the purchasing power of that value isn’t vouchsafed. Where there’s inflation, bond income and the return of face value is worth less and less over time. In a deflationary environment, the opposite is true. Cash returns from bonds are actually worth more then, so bond holders tend to do well during recessions.

But here’s the thing: Our massive debt structure and our current need for ever more accommodation is likely to challenge the Federal Reserve to undertake monetary policy experimentation, to go beyond quantitative easing into the realm of such things as inflation anchoring and yield curve control. If the Fed starts targeting the longer end of the yield spectrum, as is possible under a control scheme, further downward pressure on T-bond yields could be exerted.

That’s a story for future columns, so stay tuned.