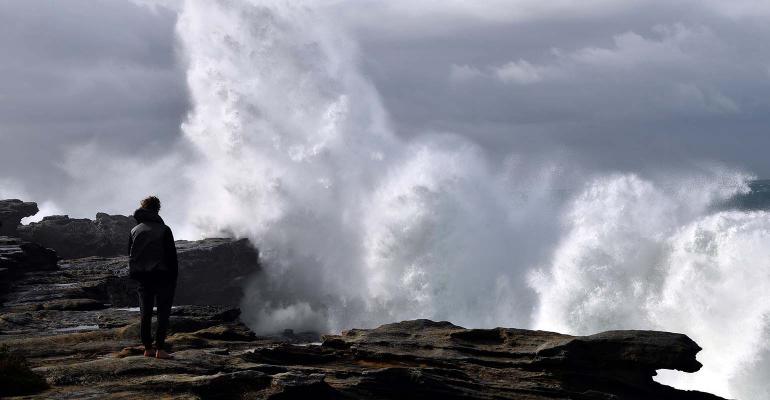 There’s an increasing belief that economic growth is being choked out of the system and inflation is already over. Be skeptical.

The tide of inflation is turning, at least as far as the financial markets are concerned. Inflation breakevens, derived from the bond market, show a sharp drop in forecasts over the last few weeks, both for the next 10 years and for the five years starting five years hence. Indeed the latter, closely followed by the Federal Reserve and known as the five-year/five-year, is right back to a level it reached in February 2021 before the inflation scare took hold. According to the bond market, there’s nothing to see here anymore:

How long this sentiment will endure is another matter, but market technicians see signs that bond yields have formed a wave that has now peaked. I’ve advertised my skepticism about technical analysis, which often has a spurious precision. But really clear patterns that are popularly regarded as significant often become self-fulfilling prophecies. One of the most popular is the “head-and-shoulders” pattern — when a market makes a peak, dips, moves back to a higher peak, dips back to its original level, moves back up to the level it made during its first move upward, and then declines again. It’s held to represent a top or, if the head and shoulders belong to someone hanging upside down, a bottom. And the 10-year Treasury yield, the most important rate in the world of finance, looks very much as though it has just traced out a perfectly formed head and shoulders:

As the icing on the cake, the two shoulders occurred at the round number of 3%. Should we regard this as telling us anything important? No. Is there a chance that — regardless of its true importance — the algorithms, primed with technical data, will take this is an invitation to buy bonds again? Yes, there is. Even if you aren’t entranced by technical analysis, it’s certainly beginning to look as though yields are trending back down. That implies confidence that inflation will come under control without the need for the Fed to hike rates too often.

Meanwhile the dollar, driven in large part by expectations of rising rates under a hawkish Fed, also looks as though it may have peaked. Using measures of its real effective rate (taking into account inflation) against a broad range of currencies, the indexes compiled by both Citi and JPMorgan suggest that it’s just put in a 20-year high and is at a level that acted as a peak during the Covid shutdown two years ago:

That in turn implies that the greatest concern has moved from inflation to growth. In other words, we’re now more concerned about a recession than about inflation. That shows up very clearly in the relative performance of stocks and bonds (proxied below by the ratio of the prices of the most popular exchange-traded funds covering the S&P 500 and long Treasury bonds). When risk is “off,” then there is growing fear of recession and traders will buy bonds and sell stocks. The risk-off phases of the last month are marked in red. When risk is on, traders sell bonds and buy stocks. Once the initial shock of the Ukraine invasion had worn off, stocks enjoyed a rally against bonds; for the last month that has turned into high risk-on/risk-off volatility as views change on whether the US is heading for a recession in short order:

So, the belief is taking hold that economic growth is already being choked out of the system, and that inflation is already over. That’s very questionable. The following chart is from a fascinating Man Group paper on investing in inflationary regimes by Teun Draaisma, Cameron Harvey, Henry Neville and Otto van Hemert, which can be found in summary form here, and with all the statistics you could possibly want here. The researchers identified six inflationary eras since the 1920s. Here they are, along with the performance of the stock market, and the recession periods when growth was negative:

Several things jump out from this. First, inflation regimes seldom overlap with recessions, with the stagflationary 1970s the significant exception. Usually, inflationary eras tend to last somewhat longer than recessions (the Great Depression was the major outlier) and to end immediately before the recession starts. Second, the volatility of inflation has reduced dramatically in the last three decades. Typically when inflation is let out of the bottle, a period of sharply varying inflation ensues, with several separate peaks. This was the pattern both around World War II and during the “Great Inflation” era of the 1970s. Inflation may well have just made a peak; history suggests that we can expect subsequent waves and heightened volatility before it’s over.

If we look at the US and the UK, which has tended to have a worse problem with rising prices and has now seen headline inflation reach double figures, it’s again clear that inflation tends to move in waves. It doesn’t reach a higher plateau and stay there:

That suggests that even though the focus is already shifting to whether there is evidence of a growth slowdown — and a lot of measures are slowing down, but nothing yet suggests outright sustained negative growth — there’s a strong chance that by the end of the year we’ll be waiting to see how low inflation can go, and then bracing for another “wave.” Even if inflation does continue to decline for the next few months, which is likely, it would be wise to position for further bouts before this inflationary era is over.

It’s well known by now that protracted high inflation is really bad for both stocks and bonds. A fascinating demonstration comes from this exercise by Jim Reid of Deutsche Bank AG. Going back to the beginning of the 19th century, Reid and his team divided the stocks and bonds of 15 different countries into valuations deciles. A very low number suggests that both stocks and bonds look universally cheap, while a high one suggests both look too expensive. It’s inflation that makes both cheaper at once, and the lack of it that allows them to grow more expensive together. The higher the valuation, the lower the subsequent returns are likely to be. This is the chart that resulted:

Long-term assets are now as expensive as they’ve been in more than two centuries viewed this way — and the last Great Inflation period ended in 1981 with them as cheap as they had ever been. So it’s best to work on the assumption that neither stocks nor bonds are going to fare well over the next few years.

What would work instead? Draaisma and his team provide a league table of how assets and strategies perform during inflationary eras compared with how they perform the rest of the time. It shows, to nobody’s surprise, that the assets that are most important to avoid during inflationary eras include consumer durable equities (a -15% average annual return), 30-year Treasuries (-8%), and investment-grade corporate bonds (-7%). To prosper, it’s best to hold commodities, which should surprise nobody. Energy commodities rack up substantially all of their returns in inflationary regimes — a real return of 41%, compared to -1% all the rest of the time. Other commodities, led by gold and precious metals, also produce better real returns under inflation.

For those concerned that we’ve embarked on a repeat of the 1970s, Reid of Deutsche offers these comparisons. In real terms, energy stocks managed a 0% return over that decade (their rise exactly equaled inflation) and all other sectors fell:

As for commodities, substantially everything managed to protect you from inflation, but some (energy and precious metals) did much better than others:

The rally in commodities so far likely limits the gains that can be made from here. But it’s impossible to ignore this sector if you think inflation will keep rising.

Meanwhile, the most interesting finding of the Draaisma research is that the other way to prosper under inflation is through trend-following. Equity trend-followers, which might otherwise be called dedicated followers of momentum, do almost as well under inflation (8%) as they do the rest of the time (11%); momentum strategies applied across all asset classes do much better (averaging 25% in inflationary regimes, against 16% the rest of the time). This therefore looks like it should be the time for macro or trend-following hedge funds to start delivering, after the best part of a decade when they’ve failed to do so.

Within the stock market, factor investing can also work, although it helps to make “short” bets on some stocks to fall, as well as taking long positions. Large companies, and “quality” stocks with consistent profits and strong balance sheets are, as you might expect, strong during inflation eras. To quote Draaisma and his team:

In real terms, the premium for being long small companies and short large companies is -4% a year in inflationary periods, compared with +1% in normal times. This fits with intuition. Economies of scale are important in mitigating the costs of inflation. The Profitability and Value factors roughly hold their own during inflationary periods.

Finally, there is always a refuge in collectibles for those who can afford them. This isn’t helpful for big institutional fund managers, but art, wine and stamp collections can all help defend you against rising prices. Real returns were positive for all three asset classes under inflation, with art at +7%, wine at +5% and stamps returning +9%.

An extra advantage is the margin of safety. Whatever happens to prices, at least you can look at your paintings and stamps. And if you don’t mind losing out on the resale value, you could even drink the wine. That may well be a tempting option, because managing money while buffeted by waves of inflation is going to require nimbleness, fortitude and luck. Even with the attention shifting to growth, the chances are that we will be dealing with inflation for a while.

I find it increasingly hard to contain my anger over gun crime in the US. Incidents like the random shooting on the New York subway on Sunday, or Tuesday’s appalling massacre at an elementary school in Texas, simply don’t happen in other countries. It’s absurd to say that the Founding Fathers meant it to be this way when they wrote the Constitution, or that they would be happy with the results if they could see them now. Thankfully, my boss backs one of the most effective charities attempting to do something about this. You might want to consider donating to them here.

I’m sorry not to offer anything cheerful in this slot, but nothing good has ever come of a school shooting. However, one such massacre more than 40 years ago did inspire a song that has, sadly, stood the test of time. So maybe listen to Bob Geldof’s masterpiece: I Don’t Like Mondays by the Boomtown Rats.

To contact the author of this story:
John Authers at jauthers@bloomberg.net