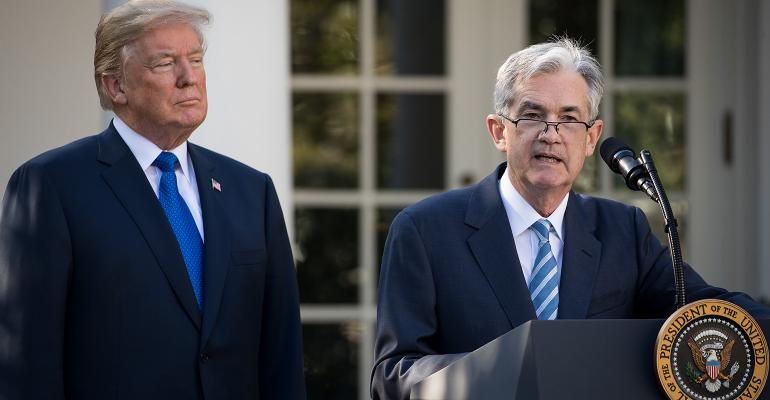 Jerome Powell is the “smart choice” to chair the FOMC, said bond managers gathered at the Inside Fixed Income conference Thursday.

Bond managers who gathered at the 2017 Inside Fixed Income conference in Newport Beach, Calif., on Thursday largely welcomed the news that President Donald Trump picked Jerome Powell as his choice to lead the Federal Reserve.

Though largely expected, these managers said the markets would welcome the certainty, and given that Powell is expected to stick to the script of current policy around interest rates and the end of quantitative easing, most expected little disruption. They also largely welcomed Powell’s views on easing back some of the regulations on banks.

“It’s a smart choice,” said James Rieger, head of fixed income indices at S&P Dow Jones. “He said he’s openly looking to remove restrictions on the financial community, at least around the fringes. But he’s also in favor of a slow (interest rate) increase. That’s probably the right choice.”

“I think we’ve seen Trump would like a dove” in the chair, said Anne Mathias, senior strategist for fixed income at Vanguard. Trump’s been a vocal advocate for low interest rates, and has an interest in maintaining the stimulus of low rates on the stock market.

But the choice of Powell may indicate a slight change in the dynamics of the Federal Reserve, said Michael McNiven, managing director and portfolio manager with Cumberland Advisors.

“For so many years, the Fed had tried to declare its independence. For reasons of stability, (presidents) have usually reappointed the chair. For that reason, it’s maybe not a good choice at a time when we are looking for stability. Chair Yellen has done a good job. She’s credible. Possibly the most credible chair we’ve ever had.”

McNiven echoed the concern of some that Powell is not an economist, and will be the first Fed chair without a PhD in economics in a long time; Yellen’s departure leaves just one professional economist on the Fed’s Board of Governors. “I don’t know what the implications are long term, but it does seem we are changing the dynamics,” McNiven said.

Powell’s appointment likely won’t change the trajectory of the Fed’s stated intention to begin reducing its balance sheet, bloated after rounds of quantitative easing. “I don’t think it’s going to be a chaotic event,” said Mathias.

The Fed’s plan—to let $10 billion worth of maturing Treasurys and mortgage-backed securities roll off its $4.5 trillion balance sheet per month—is largely seen by the managers as easily absorbable in the market.

“The Fed is definitely massaging the information. They’re just not going to be buyers. Like the price of shoes is not going to change if I don’t go to Neiman Marcus today.”

“It could be more high quality liquid assets for (investors),” she said. “It could bring more fluidity and liquidity to the market.”

“These are bonds the market is looking for,” said Reiger. “Even it there is a trickle out into the market place, it gets sucked right up,” he said.

“Powell is on record saying (the balance sheet target) is $2.5 to $3 trillion,” a higher number than the $2 trillion target previously considered, said McNiven, suggesting the pick for chair of the Federal Open Market Committee doesn’t have an aggressive agenda when it comes to winding down the Fed’s balance sheet.

“Does it mean anything in the short term? Not at all. $10 billion a month? There’s nothing to see here. We’ve still got global stimulus,” McNiven said, referring to the policies of the European Central Bank and the Bank of Japan.

Mathias said the only point of caution might be if the spread between long-term and short-term Treasurys flattened to the point where Powell’s Fed felt it had to actively sell some of its holdings in order to shape the yield curve. “It’s not unthinkable. But it’s a low probability tail risk. But it would be interesting.”