How savings can hurt the economy.

The Commerce Department’s Bureau of Economic Analysis released its personal income and outlays report Friday morning. Among the headline numbers was April’s 12.9% increase in disposable personal income along with a 13.6% month-over-month decrease in consumer spending.

Talk about good news mixed in with the bad. The income number’s jarring to say the least. How did household receipts actually increase as so many jobs were lost?

Dig down a bit and it becomes clear. Yes, personal income rose nearly $2 trillion in April, but employee compensation fell by more than $870 billion. So where did all that new pocket money come from?

The government. Transfers to individuals nearly doubled in April to $6.35 trillion.

That was (arguably) the good news. And the bad news?

Here’s the big picture: The temporary boost in personal income, combined with depressed spending, now makes us a nation of savers. Our savings rate—normally about 8% of disposable income—ballooned to a whopping 33% in April.

And why’s that bad? To turn those government transfers into true stimulus, those savings need to flow back into the economy. Folks have to start spending again. Now, it’s true the hiatus on services spending forced by coronavirus lockdowns is ending, to some degree or another. People are now going out to dine and to get haircuts. Spikes in infection and hospitalizations rates, however, could threaten the recovery and prompt another round of business closures. The recovery is tenuous at best.

For many years, the Fed’s sweet spot for core PCE has been a 2% year-over-year increase. That’s a target that’s often missed, though. The last time the Fed threaded that economic needle was 2012 and then just for four months. Since then, core PCE inflation’s been averaging 1.61% annually. In April, however, the rates slipped below 1% for the first time in 11 years. It’s a real rarity for the inflation rate to get that low: It's happened just five times since the annual rate’s first calculation in 1960.

Historical novelty aside, the drop in the PCE inflation rate has further significance to consumers and investors. It’s boosted real yields, even as the Fed ratcheted down overnight lending rates. Not by much, mind you. The real fed funds rate is still underwater at -0.91%, but that’s 54 basis points better than it was in March (see the chart below). 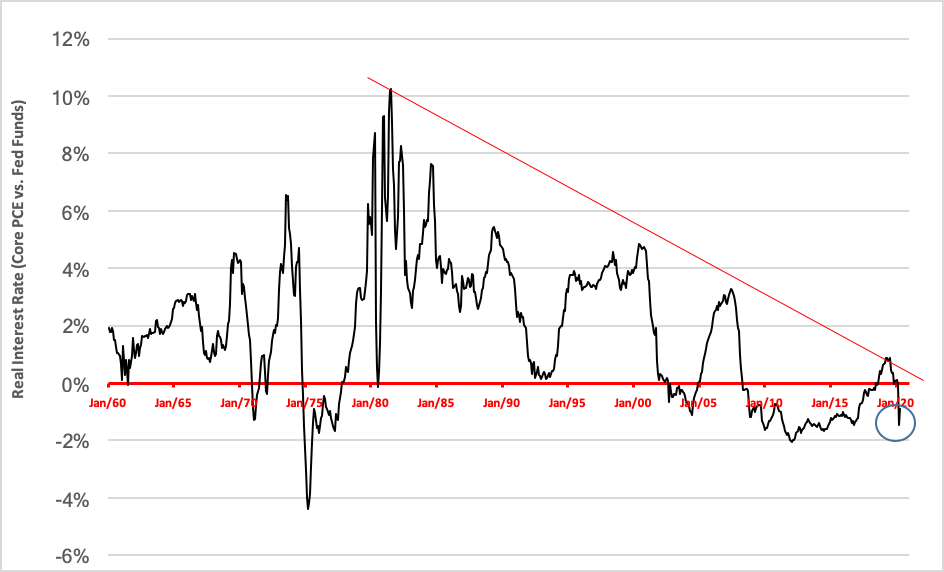 The problem with rising rates? In reality (no pun intended), it’s a negation of the Fed’s intended accommodation. Most particularly, rising real rates encourage saving rather than spending and investing. That’s definitely not stimulative.

We may be overthinking this if the current disinflationary excursion is short-lived. After all, the longest stretch of sub-1% PCE performance has been just four months.

But these are times like no other. The Fed’s got to be watching this with a fair amount of trepidation. If the inflation trend persists, the central bank may have to look beyond traditional accommodation. What form monetary policy takes in the future will, in large part, depend on the fiscal policy adopted by the administration and Congress.

And that, in an election year, is anybody’s guess.