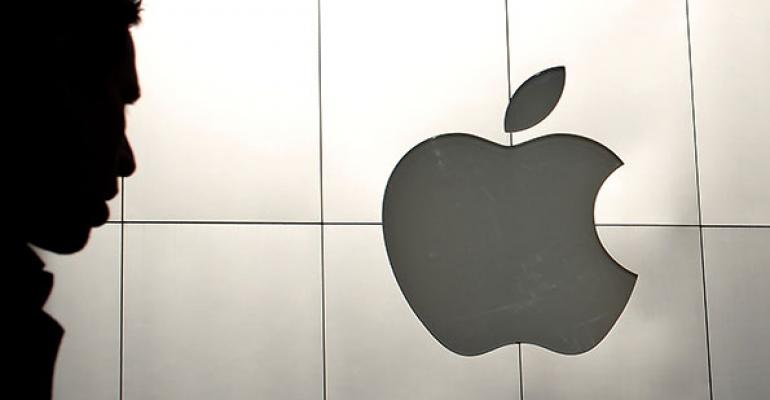 The technology company invests in corporate bonds, U.S. treasuries and money market funds to avoid bringing money back to the U.S. from abroad and triggering corporate income taxes on the earnings.

(Bloomberg) --If Apple Inc. were a bond fund, it would dwarf the competition.

The iPhone-maker has $148 billion of its record $257 billion cash pile invested in corporate debt alone, according to a company filing from Wednesday. That’s enough to buy all the assets in the world’s largest fixed-income mutual fund, the Vanguard Total Bond Market Index Fund, which has about $145 billion of assets including company, government and mortgage bonds. Like many technology companies, Apple has resisted transferring the money it earns abroad back to the U.S. to avoid triggering corporate income taxes on the earnings. Instead, the Cupertino, California-based company invests in corporate bonds and other assets like money market funds and U.S. Treasuries.

With more than 90 percent of its war chest abroad, the company regularly issues bonds of its own to help fund programs like share buybacks and capital spending. Apple said Thursday it’s selling debt in as many as six parts to support a 63-cent dividend and an increased stock-repurchase program.

Apple and other cash-rich companies are holding out, hoping that they may soon be able to bring their cash home at a lower tax rate. President Donald Trump’s tax plan includes a repatriation provision, though it didn’t specify a rate. He proposed a 10 percent levy when campaigning, and Treasury Secretary Steve Mnuchin has said the rate would be “very competitive.”

Apple’s holdings, managed by its Braeburn Capital Inc. unit in Reno, Nevada, may be large enough to move markets if the company makes any big shifts in its allocations. Apple has typically favored safer, shorter-dated bonds from high-rated financial issuers and other companies. "Companies have been looking at the repatriation issue and a portion of them are prepping for it," Campbell said. "I think Treasuries would end up absorbing some of the supply."

After corporate bonds, Apple’s next-largest holdings in its pile of cash and marketable securities are $53 billion it allocates to Treasuries and $21 billion it keeps in mortgage and asset-backed securities. Apple executives have been mum on what they’d do if repatriation becomes a reality.

“It’s very difficult for us to speculate,” Apple’s Chief Financial Officer Luca Maestri said in an interview Tuesday. “We’d like to reassess what we’ve done if and when that happens.”