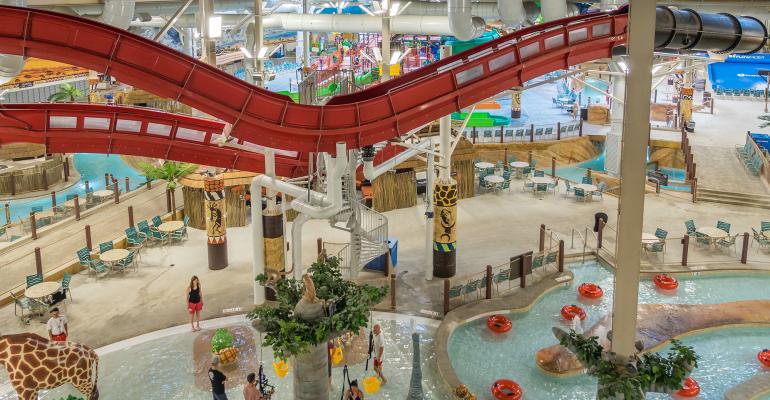 The closing of the Kalahari water park and resort triggered a default on a $347 million loan.

(Bloomberg)—One of America’s biggest indoor water parks, normally packed with frolicking families, has gone dark -- a casualty of social distancing. Now, the mortgage on the property is in trouble.

The Kalahari water park and resort in the Poconos, with 220,000 square feet of twisty slides and splash pads under a climate-controlled dome, has been shuttered since March 17, triggering a default on its $347 million loan, servicing documents show.

Just a 90-minute drive from New York City, the park is one of several built in recent years to lure the area’s high-spending weekend-trippers -- like the one at New Jersey’s massive American Dream mall, ready for its debut before Covid-19 restrictions shuttered it indefinitely. All the region’s water parks, including the Poconos outpost of Blackstone Group Inc.’s Great Wolf Lodge, are closed to wait out the pandemic.

It’ll be a different world when they reopen. Parents who previously didn’t think twice about bringing their kids to a communal pool are now weighing every potential health risk. And the parks -- with attractions built purposefully big to accommodate large groups -- will have to comply with mandates severely limiting their numbers of guests.

“If they have to open up at 50% capacity, they will never achieve the occupancy level they were budgeted to achieve,” said David Sangree, president of Hotel & Leisure Advisors, a firm that consults on the financial feasibility of water park projects, including the Kalahari. “They will go back to being very popular again, but during the year 2020, when this is occurring, this is a crisis.”

Travel and entertainment have been particularly hurt by social distancing, and even as the economy starts to reopen, traditional tourist hubs could struggle to lure visitors wary of large crowds.

Across the U.S., 98% of all privately owned indoor water parks were shuttered as of May 14, according to Hotel & Leisure Advisors. Concerns about the safety of the spaces, and how transmissible the virus might be within them, will likely linger well after the parks reopen.

“We’ve certainly been challenged by the closures, but we’re not alone,” Todd Nelson, chief executive officer of Kalahari Resorts and Conventions, said in an email. “The entire hospitality industry has been hit hard.”

Indoor water parks have become a big business, as long-suffering malls reinvent themselves as family entertainment zones and resort operators hone in on ways to boost year-round occupancy. They’ve drawn investors such as Blackstone, which last year bought a controlling stake in the company that runs Great Wolf, a nationwide chain of hotel properties, each centered around a water park.

In Pennsylvania’s Monroe County, Kalahari opened its first phase in 2015, banking on the higher hotel rates that tourists from the New York and Philadelphia areas could pay. The nearby Camelback Mountain ski resort debuted its Aquatopia water park that same year.

The county, also home to a Great Wolf Lodge, takes in 75% of the $4.2 billion that tourists to the wider Pocono region spend annually, said Chris Barrett, chief executive officer of the Pocono Mountains Visitors Bureau.

“People realize, or are starting to realize, that we do have a large concentration of water parks,” Barrett said. “They’re a huge piece of our economy.”

Kalahari’s Poconos resort, with a 977-room hotel and a convention center, was valued at $676.7 million in May 2018 when its loan was underwritten, data compiled by Bloomberg show. The property’s net operating income last year was nearly twice what was needed to service the debt, but less than the 2.6 times that lenders had assumed when underwriting.

A closing of more than 30 days amounts to a breach of the lender’s terms, and could mean “imminent default” on the debt. The loan, originated by JPMorgan Chase & Co., has been transferred to special servicer SitusAMC. The firm, which handles troubled debt that’s been packaged into commercial mortgage-backed securities, is working out a forbearance agreement with the resort.

“We’ve weathered hard times in the past and feel confident that we can weather this storm as well,” said Nelson, Kalahari’s CEO.

Lenders are getting twitchy with other indoor attractions in the Covid-19 era. A security tied to the construction of American Dream could be essentially worthless after New Jersey’s shelter-in-place order closed the just-opened project -- including the water park -- indefinitely, Fitch Ratings said last month.

Dana McHugh, a spokeswoman for American Dream, declined to comment.

Blackstone’s Great Wolf water parks, which draw visitors who can get there by car, may recover quicker than other properties that rely on business travelers hopping on planes and attending large gatherings, President Jonathan Gray said on the company’s earnings call last month.

Kalahari expects to reopen its Poconos water park on June 16, and intends to promote social distancing by spacing out lines for rides and thinning the density of lounge chairs, which will be sanitized frequently, according to its website. A standard guest room for June 20, a Saturday night, is listed at $379, including park admission for two adults and two children.

Poconos tourism backers are counting on setbacks from the pandemic to be temporary, and see the region as a natural first getaway for many families after the lockdowns end.

“There’s a lot of cabin fever and people do want to travel,” said Barrett of the visitors bureau. “The first thing they’re probably going to do is drive -- and drive within a 200-mile radius.”

--With assistance from Dan Wilchins and Adam Tempkin.

To contact the reporter on this story: Oshrat Carmiel in New York at [email protected]bloomberg.net