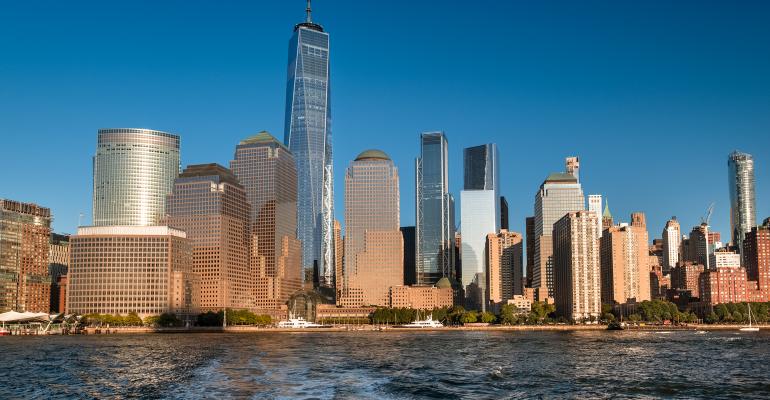 Beginning Monday, swaps desks will switch from Libor to the Secured Overnight Financing Rate when entering into most interdealer trades.

(Bloomberg) -- U.S. regulators are wagering a major shakeup of the multitrillion-dollar interest-rate swaps market is just what’s needed to wean Wall Street off the London interbank offered rate for good.

In a key development in the shift from the discredited benchmark, beginning Monday, swaps desks will switch from Libor to the Secured Overnight Financing Rate when entering into most interdealer trades, effectively changing how they hedge their interest-rate risk.

The move is designed to ignite a flurry of activity in derivatives tied to SOFR, ensuring enough liquidity to help establish a forward-looking term structure, a critical holdup that’s prevented various cash markets from embracing the rate. It’s the first step in a renewed effort to push firms toward the benchmark ahead of the year-end deadline to ditch Libor for new transactions, and comes amid increasing competition from a slew of new reference-rate providers seeking to carve out their own slice of the post-Libor landscape.

This “is a huge deal,” said Thomas Pluta, global head of linear rates trading at JPMorgan Chase & Co. “We’ve been surprised at how slow the uptake in SOFR derivatives has been to this point, so this is exactly what the market needs.”

For more on the transition away from Libor:

The shift will see SOFR replace Libor as the floating leg on all linear swaps, swap spreads and curve trades in the interdealer market, where financial institutions like JPMorgan and Goldman Sachs Group Inc. hedge the interest-rate exposure they incur from transactions with clients.

Still, it will create more volume in SOFR derivatives by definition, said Bart Sokol, a managing director for U.S. interest-rate swap trading at Barclays Plc. That should narrow bid-ask spreads, encourage banks to migrate end users over to SOFR, and ultimately facilitate the liquidity the Federal Reserve-backed Alternative Reference Rates Committee has said it wants to see prior to endorsing a term rate.

“It’s a healthy way to build up the marketplace,” Sokol said.

Extricating Libor from the financial system has proven a monumental endeavor since global regulators in 2017 announced plans to phase out the benchmark. Over $220 trillion of assets were still tied to the dollar iteration of the rate as of the end of last year, including more than $80 trillion in notional value of over-the-counter interest-rate swaps, according to data from the ARRC.

Participants in the syndicated corporate loan markets in particular have said that operational constraints make it difficult to transition from forward-looking Libor to an overnight rate such as SOFR without a similar term structure.

“We’re talking about a very complex ecosystem,” Tal Reback, a principal at KKR, said July 21 on an panel discussion hosted by the ARRC. “With the term rate, the ability to project your cash flows in the future -- both as a borrower for your interest expense and as a lender -- enables you to plan.”

Monday’s shift seeks to replicate a similar move in the U.K. last year that’s been credited with helping get swaps desks in London to abandon Libor.

“This is an opportunity for the industry to take collective action and deliver a piece of the puzzle, to deliver term SOFR into parts of the market that are mission critical,” Tom Wipf, ARRC chair and vice chairman of institutional securities at Morgan Stanley, said during the panel.

Some market watchers remain wary. It wouldn’t be the first time officials have predicted a spike in SOFR trading, only to be disappointed.

So did the setting of ISDA’s spread adjustment -- used to determine fallback rates for Libor deals maturing after the benchmark is phased out -- earlier this year.

Those setbacks in part prompted the ARRC in March to announce that it couldn’t recommend a forward-looking term rate by mid-year as initially planned, and couldn’t even guarantee one by year-end.

For more on the Libor transition, subscribe to the Libor Countdown

While officials have since upped the urgency, the announcement nonetheless helped other Libor alternatives gain traction.

Last month the American Financial Exchange, the administrator of Ameribor, launched term rates based on futures contracts listed on the CBOE Futures Exchange.

And in May the first corporate syndicated loan tied to the Bloomberg Short Term Bank Yield Index was issued, coming on the heels of the first swaps trade and first bank bond linked to the benchmark. BSBY is administered by Bloomberg Index Services Limited, a subsidiary of Bloomberg LP, the parent of Bloomberg News.

Yet regulators in recent weeks have begun to push back, making clear their preference for SOFR.

Earlier this month, the U.K. Financial Conduct Authority’s Edwin Schooling Latter said that so-called credit-sensitive rates are flawed because they’re derived from markets where liquidity “has not proved robust to stress.”

For now, all eyes will be focused on when the ARRC will endorse SOFR term rates. Wipf said last month that it could be a matter of days, rather than weeks, following the swaps shift.

The ARRC has already selected CME Group Inc. as the recommended administrator of forward-looking SOFR, and in April the exchange started publishing term rates for one-, three- and six-month tenors based on SOFR futures.

Yet Monday’s move is just the first in a series of changes intended to push the derivatives market toward the benchmark before the year-end deadline to ditch Libor. Interdealer market conventions for cross-currency basis swaps involving Swiss franc, British pound, Japanese yen and U.S. dollar Libor will shift to SOFR in September.

Later in the year trading of non-linear derivatives like swaptions will switch to the rate, ultimately followed by exchange-trade derivatives.

“You want to get people in the habit of transacting in SOFR before you have no other choice but to do it,” JPMorgan’s Pluta said. “When you’re transitioning a market with notionals in the trillions, you don’t want to wait until that last minute to figure out how to do it. It’s a big market so you want to make sure the pipes work.”

--With assistance from William Shaw.