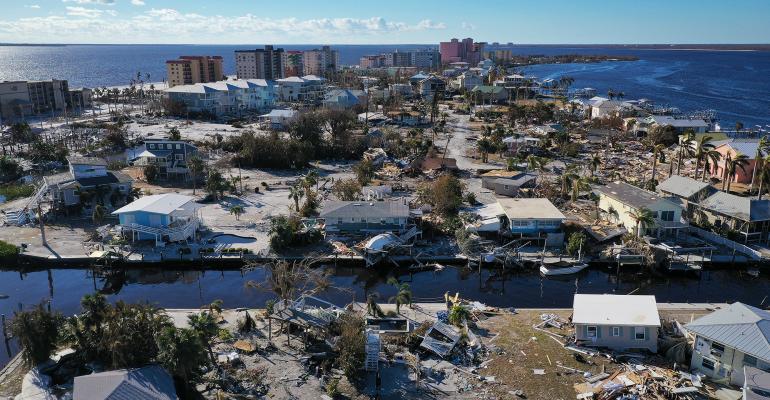 Officials looking to issue debt to rebuild and also bolster infrastructure against the risk of increasingly severe weather will be doing so during a brutal juncture for the bond market: ten-year benchmark municipal yields are near the highest since 2011.

(Bloomberg)—Florida cities looking to rebuild from the devastation of Hurricane Ian will be financing their efforts during the worst environment for municipal borrowing in more than a decade.

Washed-out roads and bridges are only the most glaring examples of urgent infrastructure repairs that the state and its localities are grappling with after the storm tore through, leaving insured losses approaching $60 billion. Debt to fund the recovery will probably start hitting the municipal market as soon as this quarter, according to Barclays Plc, which said local leaders will need to offset declines in Florida’s vital tourism and agriculture sectors.

Federal and state aid will likely ease much of the financial blow. But officials looking to issue debt to rebuild and also bolster infrastructure against the risk of increasingly severe weather will be doing so during a brutal juncture for the bond market: Ten-year benchmark municipal yields are near the highest since 2011, and the Federal Reserve is signaling further interest-rate hikes to combat rampant inflation.

Local authorities may have little choice but to factor in that additional expense, although some may choose to wait for stability in the bond market and tap federal or state funding first before issuing debt in 2023, said Clare Pickering, a municipal strategist at Barclays Plc.

“Ultimately, they need to rebuild, especially those assets that were completely destroyed,” she said. “The market timing may not be the best for that given the higher cost of issuance.”

Hurricane Ian is just the latest punishing weather event to force municipalities to tackle an infrastructure overhaul focused on rebuilding roads, airports, bridges and utility systems. Houston-area voters approved $2.5 billion of debt for flood-control measures in 2018, the year after Hurricane Harvey pummeled the region. And New York City is embarking on a $1.5 billion project to construct a system of walls and floodgates to protect against rising seas after Superstorm Sandy struck in 2012.

These projects and the latest storm underscore how the $4 trillion municipal-bond market will be crucial to how cities in Florida and nationwide harden their infrastructure to prepare for severe weather, said Tom Doe, president of Municipal Market Analytics.

“The muni market is on the cusp of a tremendous number of projects to defend against climate change,” he said. “With higher rates, it’s going to be that much more difficult.”

The initiative was expected to fund about $400 million in the fiscal year through June for a host of projects, such as elevating roadways in Miami-Dade County and drainage improvements in the city of St. Augustine. The state’s most recent budget allocated more than $500 million for resiliency including for statewide flooding and sea level rise plan.

Most of the roughly 70 Florida cities and counties that Moody’s Investors Service rates and were affected by Ian “have robust available reserves and liquidity” to support recovery work until they receive state and federal reimbursement, the ratings company said in a report.

It highlighted some entities that will face more severe pressure, including the tolling authority that runs the partially collapsed bridge extending to Sanibel Island on Florida’s southwest coast. That causeway generates a third of the entity’s toll revenue.

S&P Global Ratings placed some transportation debt issued by Lee County, which encompasses Cape Coral and Fort Myers, on credit-watch negative due to the damage to the causeway. Typically during severe weather events there’s a temporary suspension of services and damage where a storm strikes, but the destruction Ian caused to infrastructure like the causeway is in a different category, said Joe Pezzimenti, a director at S&P.

“This isn’t something that will be fixed in weeks,” he said. “It’ll take months, potentially years.”

--With assistance from Prashant Gopal.