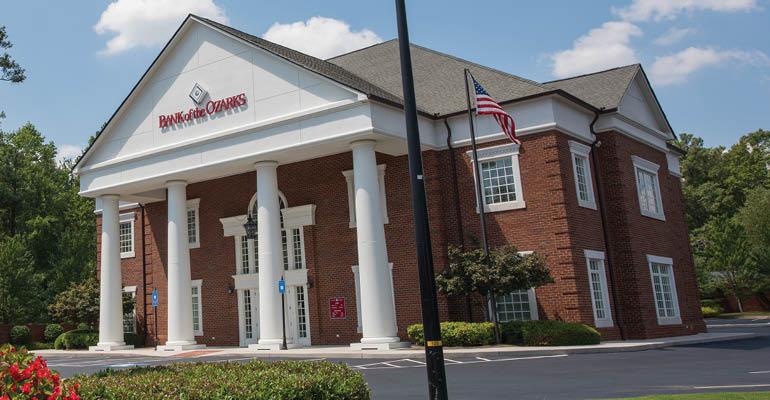 It&rsquo;s looking like Bank of the Ozarks is already on the path toward continued expansion of its commercial real estate lending.

The focus in commercial real estate finance is often on big national banks like JP Morgan or big foreign ones like Deutsche Bank, but it would be a mistake to overlook the Southern lender that’s been making waves in the commercial real estate industry, bringing a little bit of the Ozarks to the world of high finance.

Bank of the Ozarks, based in Little Rock, Ark., broke into CrediFi’s ranking of the top 10 New York City lenders in the fourth quarter of 2016 with over $500 million in loan originations and a 3.0 percent market share.

The bank had previously made the list in the first quarter of 2016, ranking as No. 7, with over $400 million in financing and a 2.4 percent share of New York City’s commercial real estate market, but dropped from the top 10 list in the second and third quarters.

One of the bank’s biggest recent New York loans came in March, when the U.S. subsidiary of Chinese real estate company Xinyuan received a $108 million construction loan from Bank of the Ozarks for a residential condominium project at 615 10th Ave. in Hell’s Kitchen, representatives of the developer were quoted as saying.

John Liang, who heads Xinyuan’s U.S. subsidiary, XIN Development, said it was hard to find banks willing to issue construction loans. “Ozarks is the only one,” Liang told The Real Deal in March. “They get the exposure to all deals.” The site reported that Bank of the Ozarks provided the financing at a 65 percent loan-to-cost ratio, with the total cost of the project estimated at just over $165 million.

The Hell’s Kitchen project already has a major retail tenant: Target, which agreed in November to open a 29,000-sq.-ft. store at the base of the Hell’s Kitchen development. The construction financing for that development comes on top of a $27 million loan from Bank of the Ozarks in January 2016 for the same property.

Other notable loans the Arkansas bank provided in New York City last year included $200 million for the Luminaire Gramercy, a 21-story “affordable luxury” multifamily property, and $92 million for NYLO New York, a hotel with 170,000 sq. ft. of space on the Upper West Side.

Bank of the Ozarks CEO George Gleason said in an earnings call on fourth quarter 2016 that the bank had seen an “accelerated trend in loan pay-offs” throughout the year, with construction and development products sold or refinanced into permanent financing faster than expected. Gleason said he expects the bank’s commercial real estate lending volumes “to continue to increase significantly,” accounting for approximately 57 percent of growth in earning assets by late 2018.

The bank’s lending outside New York City last year included a $27 million loan for Gables Station in Coral Gables, Fla., a planned development at 251 S. Dixie Hwy. The project is reportedly slated to transform a large parking lot into a multi-use property with approximately 100,000 sq. ft. of retail space, 500 residential units and improvements for gardens and recreational paths.

In Chicago, Bank of the Ozarks issued a $75 million loan on a 20-story office building undergoing renovation. Located at 125 S. Clark, in the central business district, the 110-year old property will be rebranded “The National,” and will contain 500,000 sq. ft. of rentable office space and a food hall.

Further west, the bank provided $117 million in Denver for a lot in the Five Points neighborhood near Coors Field. Both loans were issued in 2016.

We’ll have to wait for the year-end numbers for 2017 and 2018 to know for sure, but it’s looking like Bank of the Ozarks is already on the path toward continued expansion of its commercial real estate lending.