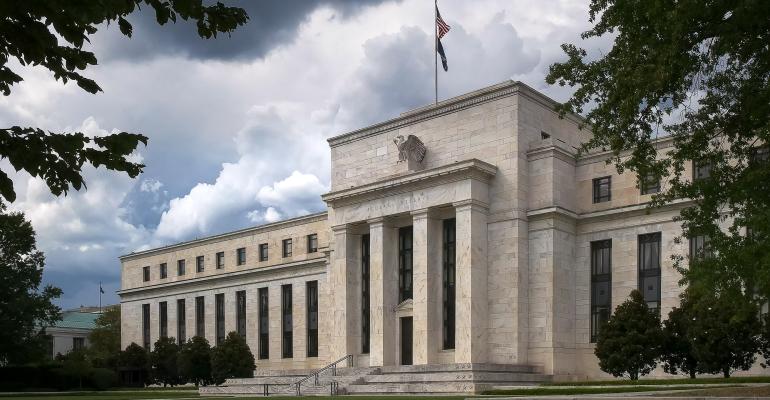 Concerns are also growing that liquidity is draining out of the world financial system as interest-rate swaps fluctuate wildly.

(Bloomberg) -- Governments and companies around the world are facing unprecedented costs to refinance bonds, a burden that’s set to deepen fissures in debt markets and expose more vulnerabilities among weaker borrowers.

A corporate treasurer or finance minister looking to issue new notes now would likely have to pay interest that’s about 156 basis points higher on average than the coupons on existing securities, after that gap surged to a record in recent days. That all adds up to about $1.01 trillion in additional costs if all those securities were refinanced, according to calculations using a Bloomberg index tracking some $65 trillion of government and corporate debt across currencies.

That broad benchmark of global debt lost 6.8% last quarter, its second-worst drop after a record slide in the previous three months, data stretching back to 1999 show. Monday brought little relief, with spreads on Asian high-grade dollar bonds little changed after blowing out the most in six months last week. 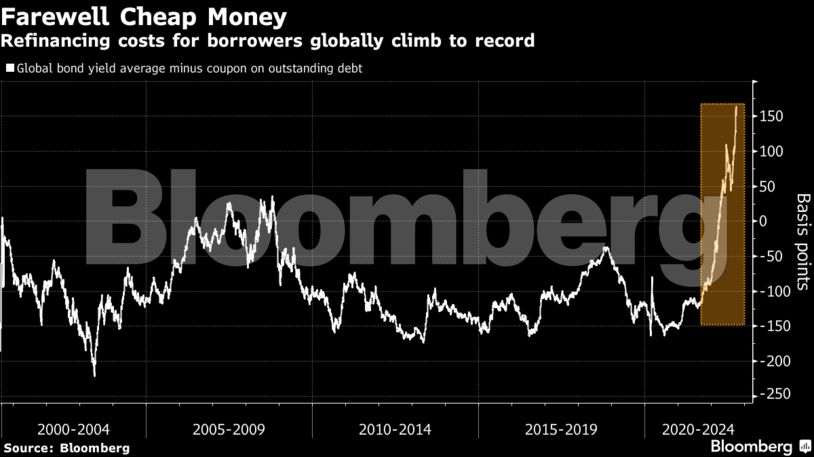 Rolling over debt is proving increasingly tricky for weaker borrowers as creditors price in risks of a global recession. Most governments and companies are still able to stomach the higher financing bills, but soaring fund outflows and volatility are causing credit markets to start to buckle. Banks last week had to pull a $4 billion leveraged buyout financing, and even investment-grade debt funds suffered one of the biggest cash withdrawals ever.

Actual overall refinancing costs will depend on where rates are when borrowers do roll over debt, and of course many with longer-term obligations won’t need to do so anytime soon. Still, with the Fed expected to raise its target rate more than a percentage point before year’s end, there’s also a risk borrowers could face even higher costs if they hold off.

Central banks must walk a fine line as they fight some of the worst inflation in decades, with Bank of America Corp. strategists recently warning that the Federal Reserve needs to slow the pace of rate hikes to prevent credit market dysfunction.

Concerns are also growing that liquidity is draining out of the world financial system as interest-rate swaps -- one of the world’s deepest markets -- fluctuate wildly. The gap between the floating- and fixed-rate legs of longer-dated swaps tied to the US Secured Overnight Financing Rate swung in some recent days by the most on record for the index, which was rolled out in October 2020 as a replacement for the London interbank offered rate.

Six US-based borrowers tracked by S&P Global Ratings defaulted in August, as signs mount that higher rates are already taking a toll on stretched borrowers’ ability to keep issuing new debt to pay off old. Other examples of debt stumbles abound, including in Asia where Sri Lanka defaulted on its borrowings earlier this year, and Chinese property firms have suffered record nonpayments.

“The era of cheap money is certainly over,” said Neil Shearing, group chief economist at Capital Economics. “We are at the start of a global recession in our view and that includes a recession in Europe, which is particularly weak.” 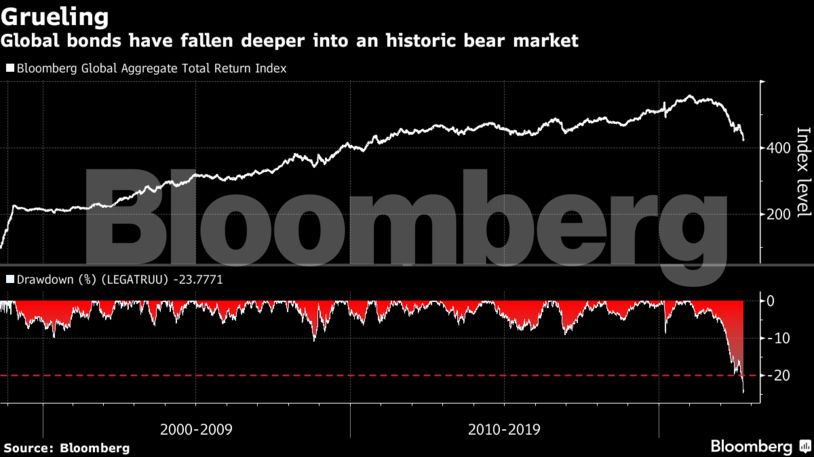 Fed bankers dispelled in recent weeks any suggestion they are near halting interest rate hikes even if it means pain for the economy. That’s even after embarking on one of the most aggressive hiking cycles in modern times and their third consecutive 75-basis point interest rate increase in September.

Steps by speculative-grade companies to push out debt maturities when markets were favorable should prevent a sharp rise in global corporate defaults, according to a September report by Moody’s Investors Service. The 12-month trailing global speculative-corporate default rate was 2.3% in August and will rise to 3.8% by August 2023 in a baseline scenario, which is still below historical averages. In more pessimistic scenarios laid out in the report, the default rate could rise much more.

The Bloomberg Multiverse Index of investment-grade and high-yield bonds across currencies has lost about 20% this year, on track for its worst annual slump ever. The securities fell into their first bear market in a generation in September.

Frontier sovereigns and highly-leveraged companies that borrowed in foreign currencies face potentially the greatest stress, according to Shearing at Capital Economics. While different in nature, the recent turmoil in UK markets after the government there announced dramatic tax cuts is a “warning” to other governments that they have less room for fiscal maneuver or policy error now, he said.

Higher borrowing costs are pinching even the strongest corporations too. The difference between current yields and average outstanding coupons for both US and European borrowers is currently around the highest in more than a decade. A sudden chill in US primary markets coinciding with the latest leg higher in yields is evidence that borrowing at current levels is becoming an increasingly unattractive proposition.

The Fed’s hawkishness is also complicating the task for borrowers because it’s sending the dollar surging to multi-decade highs against many of its major peers, including the euro and the yen. That can push up costs for non-US issuers that need dollar financing, as well as tightening financial conditions around the world.

“Investors had reported record amounts of cash in our most recent quarterly surveys, but recent trading activity suggests an increase in client selling perhaps in part driven by the need to raise additional cash for anticipated redemptions,” emerging-market strategists including Donato Guarino at Citigroup Inc. wrote in a recent report. “In other words, the cash cushion may be diminishing, making any further market jolt more damaging to asset values.”

The average yield on corporate bonds globally across currencies and ratings recently topped 6% for the first time since 2009, according to a Bloomberg index.

“We are yet to see the bulk of the impact of rate rises on the economy,” said Pauline Chrystal, a portfolio manager at Kapstream Capital in Sydney. “We still expect to see a deterioration in activity, employment, and increase in defaults.”

There were no new deals in Europe’s primary market on Monday morning, in what would be the 40th day this year without a sale, according to Bloomberg calculations.

Deal flow in the Asian dollar bond market was muted on Monday, with Chinese markets closed for a week for Golden Week and a holiday in South Korea.

In the US investment-grade primary bond market, there were no new issuers on Friday, wrapping up an abysmal week that saw just $1.7 billion sold.

--With assistance from Tasos Vossos, Jack Pitcher and Giulia Morpurgo.