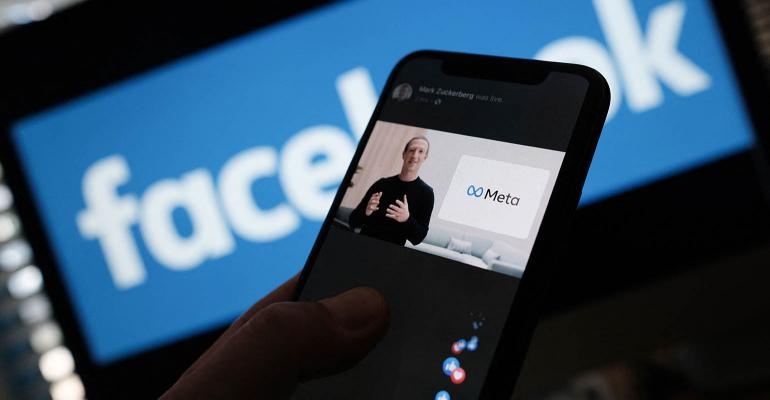 Zuckerberg-Trolling ETF Bets on Everything Metaverse Except Meta

The Subversive Metaverse ETF will chase companies both in the U.S. and overseas in any sector connected to creating immersive digital worlds.

(Bloomberg) -- A new ETF just landed with a mission to invest in everything related to the metaverse -- while shorting its loudest proponent, Facebook-parent Meta Platforms Inc.

The Subversive Metaverse ETF, launching Thursday, will chase companies both in the U.S. and overseas in any sector connected to creating immersive digital worlds. But Subversive Capital LLC, the firm behind the fund, reckons Mark Zuckerberg’s company is too reputationally toxic to be the standard bearer for the virtual-reality boom.

“Facebook seems to be the antithesis of what actual consumers want their digital futures to look like,” founder Michael Auerbach, 46, said in an interview. “Mark and his team are not the best custodians of our digital futures.”

As a result, the actively managed exchange-traded fund will not only avoid buying Meta, it will take a small short position against arguably the metaverse’s highest-profile champion. Meta rebranded from Facebook Inc. last year, signaling its intent to focus on virtual reality as adoption gathers pace.

A spokesperson for Meta declined to comment on the fund.

Global metaverse-related ETF assets have surged in the wake of Meta’s name change to about $2.2 billion, with most products only launched in the past few months. It’s the latest hot thing in the booming market for thematic funds, which invest based on compelling trends like autonomous vehicles rather than old-fashioned industry categories.

Read more: Meme-Stock ETF Is Now So Dull Manager Says It ‘Puts Me to Sleep’

The Roundhill Ball Metaverse (ticker META) is the industry leader with about $822 million under management, though it is set to give up its ticker -- stoking speculation of a deal with Zuckerberg’s Meta, which has yet to change its FB moniker.

Since most ETFs are known by their ticker, getting a good one can be make-or-break for a thematic fund. The new offering -- the first from New York-based Subversive -- will trade as PUNK, in reference to popular NFT characters.

PUNK carries an expense ratio of 0.75%. Top holdings include Roblox Corp., Microsoft Corp. and other gaming companies, as well as firms that don’t have an obvious metaverse strategy but can benefit from it, such as Peloton Interactive Inc. and Hasbro Inc.

Auerbach, who is also a senior vice president at Albright Stonebridge Group, said Subversive is looking to attract a younger audience of investors. The firm is exploring other topics for ETFs including cannabis, gaming, mental health, and climate and water, he said.

--With assistance from Sridhar Natarajan and Kurt Wagner.