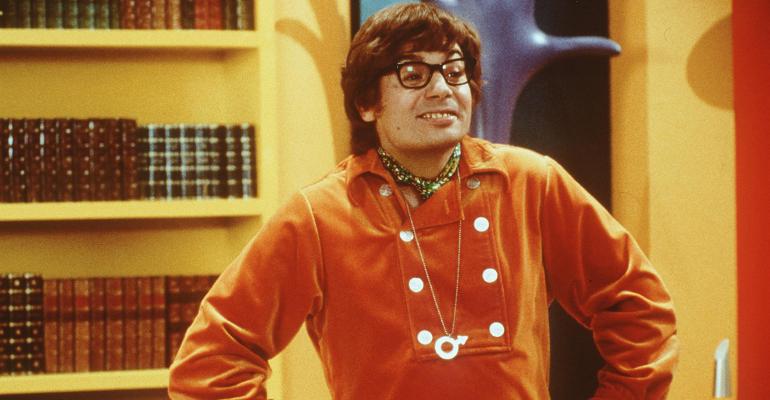 The WisdomTree Barclays Yield Enhanced U.S. Short-Term Aggregate Bond Fund -- SHAG for short -- will invest in investment-grade debt that has a short maturity.

(Bloomberg) --In the war for exchange-traded fund assets, getting attention matters -- even if that means channeling Austin Powers.

In what could be seen as a nod to the movie franchise starring Mike Myers, WisdomTree Investments Inc. chose the grooviest stock ticker around for its latest bond fund: SHAG.

The WisdomTree Barclays Yield Enhanced U.S. Short-Term Aggregate Bond Fund -- the ETF’s more pedestrian full name -- will invest in investment-grade debt that has a short maturity, the company said in a press release on Thursday. While investors will obviously judge the fund by its holdings and performance, the symbol SHAG is all but guaranteed to draw attention.

“It works,” said Eric Balchunas, an ETF analyst at Bloomberg Intelligence. “People start calling a fund by its ticker, and there’s evidence that having a good ticker can give you an edge.”

Colorful stock tickers are nothing new in the world of ETFs. With more than 1,800 funds available in the U.S. alone, standing out amid the crowd with a memorable moniker is almost as important as performance.

HACK, a cyber security-focused fund, demonstrated the power of a name in 2015, when it gathered more than $1 billion in its first year. However, others such as WSKY (which invests in the liquor industry), OLD (care for pensioners) and MENU (restaurants) have seen less success so far. Regardless of how funky they get, most of these kinds of tickers allude to the fund’s strategy.

“We often look for tickers that are descriptive of the fund’s exposure,” said Kevin Flanagan, senior fixed-income strategist at WisdomTree. “Since this new fund is a shorter duration version of our existing ETF, AGGY, SHAG seemed like a natural fit.”

Still, although the ticker wasn’t meant as a nod to Austin Powers, WisdomTree stands to benefit from its cheeky new symbol.

“A ticker can be the icing on the cake, but it’s not the cake,” Balchunas said. “But I do think it matters.”