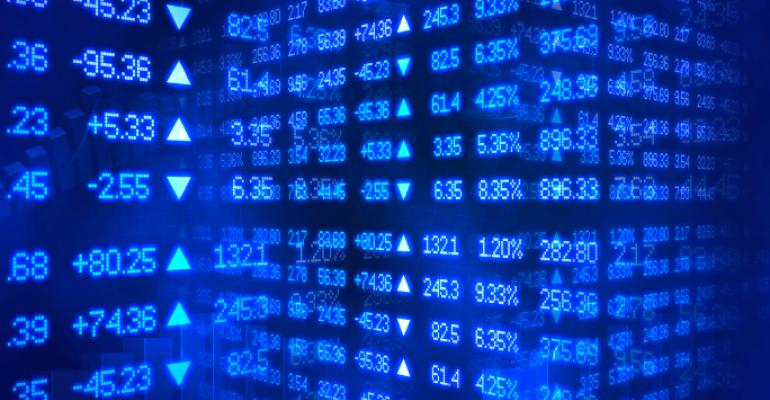 While it’s rare for an ETF to shut down, it does happen, a recent WealthManagement.com survey found. Here are some of the warning signs.

In the summer of 2009, two exchange-traded products that would let investors profit from either the rise or fall of U.S. real estate prices were listed on the NYSE Arca exchange; speculation in residential real estate was a large factor in the economic crisis, and the funds' creators, including famed Yale economist Robert Shiller, figured there was a market for investors looking to hedge their bets.

"MacroShares Major Metro Housing will open up this large and important asset class to the global investor community," said Sam Masucci, then president and CEO of issuing company MacroMarkets. The funds were set to issue $1 billion worth of shares. Time magazine called them one of the best inventions of 2008.

Less than a year later, the funds closed down after having raised a mere $20 million. “They got so much press attention,” said Ron Rowland, president of Capital Cities Asset Management, "but they were just a total disaster."

With the explosion in popularity of ETFs, many of which seek to track ever more unique investment niches, less attention has been paid to those that close. But it does happen, even to prominent funds. WealthManagement.com recently surveyed over 500 advisors about their use of exchange traded products, which includes ETFs and ETNs, and 6.7 percent of them said they’ve had an ETP in their client portfolios shut down.

When you consider that assets in closed ETFs actually make up less than one percent of the entire ETF market, “that tells me that there are a lot of advisors buying the wrong funds,” said Rowland, who publishes the ETF Deathwatch, a monthly list of ETFs he estimates are on the verge of extinction, or should be.

And closures are on the rise. As of the end of February, a total of 331 funds have shuttered, 112 of which occurred in the last 12 months, according to Rowland. In December, Invesco Powershares announced it would shutter 13 of its ETFs, including a number of energy funds, bond funds and equity funds. In February, Guggenheim Investments announced plans to close and liquidate nine ETFs, representing $148 million in assets, including some equity ETFs and its famed Airline ETF. Guggenheim said it was closing the funds to "focus resources on products that have demonstrated greater marketplace demand." 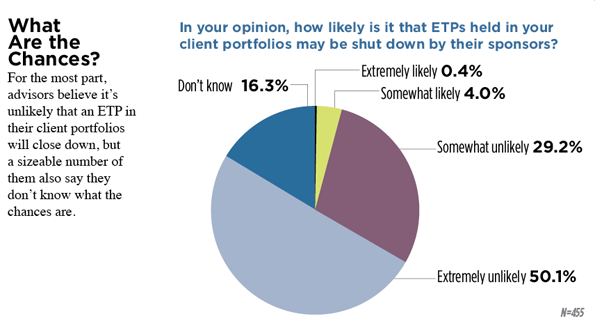 So what should advisors look for to avoid buying the wrong funds? The top warning signs are low asset levels and low trading activity, Rowland said. In the WealthManagement.com survey, many advisors said they look out for declining market capitalization and low volume.

Rowland gives new funds a six-month grace period before considering them for his ETF Deathwatch list. Funds are added if their average daily volume for a given month is less than $100,000 for three straight months, or if the fund's AUM falls below $5 million for three consecutive months.

And there are a lot of small ETPs. According to Rowland, 583 ETPs, or 40 percent of all ETPs listed, hold a mere one percent of the market's assets. “That’s the problem right there,” Rowland said.

The amount of liquidity in the ETF is also something to keep an eye on.

Advisors should also look at the ETF sponsor and where the ETF is in relation to the sponsor’s other offerings, Keary said.

“If an ETF has the least amount of assets of any other, there’s a good chance that at some point they may close that down for not being profitable enough and move the assets to something else,” Keary said.

Where ETFs Go to Die

Rowland said advisors should be monitoring the press releases of any ETF providers on Deathwatch in case they announce closures. They should have a plan for liquidating those positions prior to the delisting and find a suitable alternative.

Most of the funds that are closing have liquidity problems, so advisors would have to use limit orders, which could take days to get filled at a reasonable price, Rowland said.

“Chances are, once a fund has announced closure, it becomes tougher to get a fair price on selling, because who’s going to buy it?” 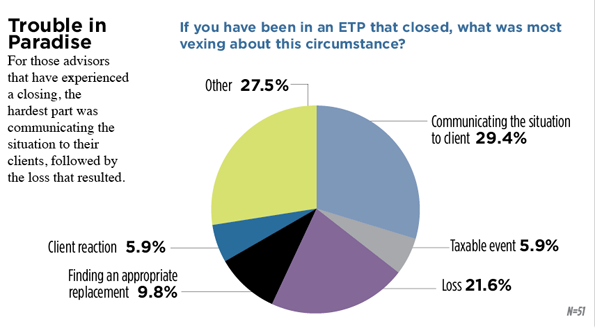