There’s a fork in the volatility road.

Baseball’s Yogi Berra really ripped up a leaf from Robert Frost’s poetry anthology when he said: “When you come to a fork in the road, take it.” Traders watching the market for S&P 500 stocks are now facing a Yogi-like fork in the road and wondering which tine to follow. Specifically, it’s a divergence in the pricing of S&P 500 Index options that’s got traders and institutional investors puzzled.

Everybody seems to know about VIX, the so-called “fear index” (in actuality, the Cboe Volatility Index). VIX is derived from the implied volatility embedded in near-term S&P options and measures market expectations of future volatility. The reason VIX is dubbed a fear index is that it historically spikes higher as traders’ trepidations about declines in the S&P 500 increase. VIX is depicted as the black line in the chart below. You can see the index shot upward in February this year as stocks swooned, then trended downward in the wake of the market break. 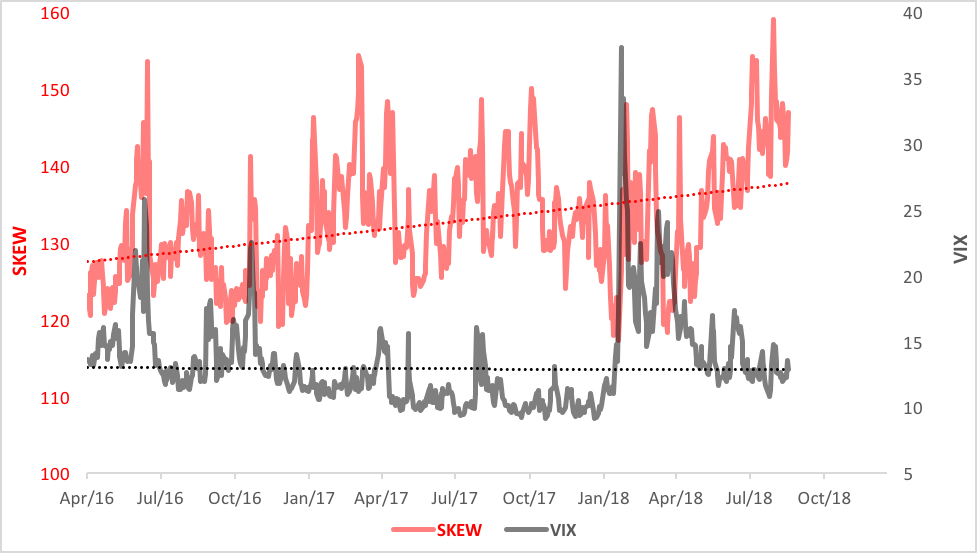 VIX, in fact, is heading back towards the level of complacency that preceded the February collapse.

Contrast that with the trajectory of the Cboe SKEW Index. Similar to VIX, SKEW is calculated from S&P 500 Index options, but SKEW measures the degree of “tail risk” priced into the derivatives.

The volatility assumption in VIX is rooted in a normal distribution—a “bell-shaped curve”—of returns where the “tails” representing standard deviations above (to the right) and below (to the left) of the mean are similar. History, however, shows that the S&P 500 distribution is anything but normal. The frequency of outlier returns—two or three standard deviations from the mean—is, in fact, greater than that of a normal distribution. To boot, the return distribution is skewed negatively. In other words, S&P 500 returns carry left tail risk. “Fat” tail risk. SKEW is trending higher now—and tail risk increasing—as VIX has slumped.

See the fork in the road?

Option prices seem to be telling us that the market feels the risk of a big move is waning in the near term but if a move happens, it’s increasingly likely to be to the downside.

What’s an investor to do? Well, one thing is to consider an allocation to assets that are likely to appreciate when the S&P declines and volatility spikes. One exchange traded fund capable of doing so is the Cambria Tail Risk ETF (BATS: TAIL), a portfolio invested in S&P put options and intermediate-term U.S. Treasury paper. The fund’s commitment to puts increases when volatility is low (and options are cheap) and lessens when volatility is high (and options are expensive). Treasury securities, though, account for the bulk of the portfolio. Treasuries tend to appreciate during market selloffs as investors flee to safe haven markets. Compared to other hedged ETFs, TAIL’s NAV erosion is minimized in rising markets because it’s not leveraged and holds no VIX futures.

Will TAIL keep investors safe in a market break? It’s only been around for a year and a half, so its only real test has been the February volatility spike. It performed well then, so there’s little reason to doubt its capabilities going forward.

Going forward was important to Yogi Berra. His wise counsel? He once said: “If you don’t know where you’re going, you might wind up someplace else.”