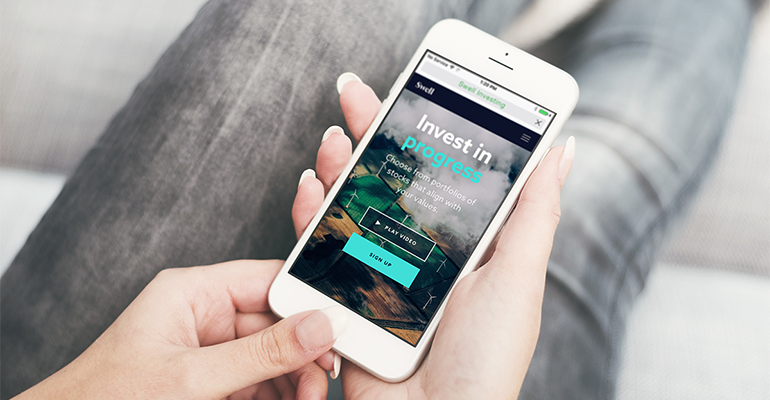 What Do Investors Value, Ethics or Returns? Startup Bets on Both

Swell Investing focuses on companies that do good and do well

By Julie Verhage and Rachel Evans

(Bloomberg) --It used to be a choice: follow your conscience or chase returns. But now one Southern California startup is betting its strategies can deliver both kinds of value -- market and ethical.

Swell Investing, a digital investment platform incubated by Pacific Life Insurance Co., has created several portfolios of stocks that it says reflect causes such as green technology, clean water and disease eradication. Like many so-called ESG funds that focus on a company’s environmental, social and governance actions, Swell says its strategies seek to outperform established values-based mutual funds and exchange-traded funds -- and keep their moral compass at the same time.

The difference between Swell and many of its competitors is its portfolios actually do try to capture what ESG is supposed to be about.

Socially-responsible investing has struggled to win over U.S. investors so far. And it’s not hard to see why. Early incarnations of these strategies cut out entire problematic sectors, such as petroleum or weapons, which sacrificed performance. More recent attempts have redefined ESG to include “best-in-class companies” within these industries. That’s led funds to loosen their standards, including, say, the more ethically responsible oil explorers or gun makers in their portfolios.

But for Swell, that’s missing the point. It’s seriously looking for companies that manage to both do well and do good at the same time.

“ESG strategies evaluate companies based on their environmental, social and governance factors, meaning how ethical and sustainable their business practices are, but we take it a step further,” said Dave Fanger, founder and chief executive officer of the Newport Beach, California-based asset manager. “In order to be included in a Swell portfolio, a company must have a high ESG rating but it also must derive revenue from a product or service that addresses environmental or social challenges as they are outlined in the UN Sustainable Development Goals.”

How does Swell do it?

Simple. It focuses on owning concentrated stakes in companies like Tesla Inc., Whole Foods Market Inc. and Lululemon Athletica Inc. Over the past year, its green tech strategy is up nearly 30 percent, zero waste has climbed 16 percent and clean water has risen 21 percent. The S&P 500 Index has advanced 17 percent in that same time frame. Users can see the holdings of each portfolio on Swell’s website, as well as an explanation for why each stock was picked.

To be sure, Swell isn’t reinventing the wheel. Invesco Ltd.’s PowerShares brand started a clean energy ETF in 2005, and subsequent funds from other asset managers have focused on water, workplace equality and carbon emissions.

And Swell faces an uphill battle in spreading its way of thinking. Its assets under management are tiny -- $13 million for roughly 2,000 customers -- although the company says that’s growing by about 13 percent each week. In general, values-based funds remain a fringe investment in the U.S., with ETFs focused on ESG, green and socially responsible strategies housing less than $8 billion, or 0.2 percent of the market, data compiled by Bloomberg show.

But with research from Morgan Stanley indicating that more than 85 percent of millennials are interested in this style of investing, many firms now want a piece of the action. Morgan Stanley itself is looking to use such funds on its new robo-advice platform, adding them to thematic portfolios focused on sustainability and gender diversity.

At least nine ETFs started this year offer exposure to values-based strategies, with Goldman Sachs Group Inc. recently announcing plans for a new fund that will vie with products from the likes of BlackRock Inc., Nuveen Investments and Oppenheimer Funds. So the competition’s stiff. And for Swell to come out on top, it’ll have to prove it can do a number of things right over a long period of time.

“It’s not enough to have a swell idea and a swell website,” said Eric Balchunas, a Bloomberg Intelligence ETF analyst. “You need swell performance.”