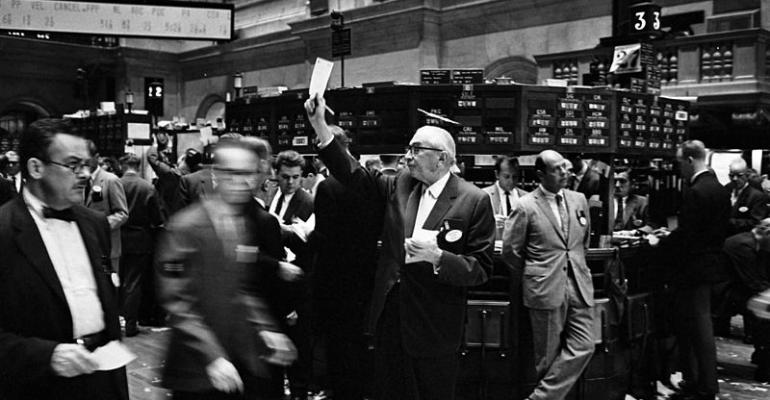 Despite the dramatic growth of ETFs, many advisors still don’t use them and don’t understand them, a new WealthManagement.com survey found.

Despite the growth, many advisors still don’t use them in their clients’ portfolios and many admit they don’t understand them, according to a recent survey conducted by WealthManagement.com, “Advisor Use of ETPs—And Lessons From the Trenches.” Of the 735 advisors surveyed, three quarters said they use ETPs in their client portfolios, while 25 percent don’t.

The top reason advisors don’t use them (42.5 percent) was that they don’t know enough about them. Others felt mutual funds were better products (18.6 percent), or ETPs were not appropriate for their clients (18 percent).

When asked what ETF product providers could do to make their life easier, many advisors said they needed better research, more client-friendly product literature, better websites and simplified marketing tools. 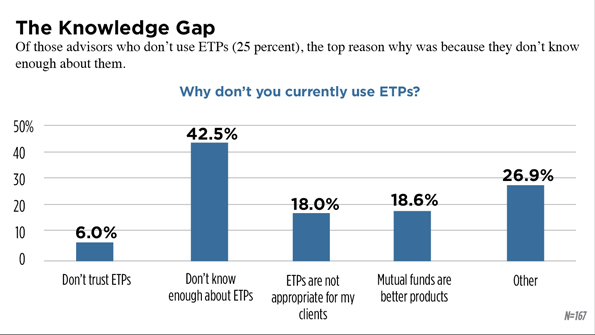 As much as the ETF industry has dominated news headlines, it’s still relatively young and a small market compared to mutual funds (At year-end 2011, total worldwide assets in mutual funds were $23.8 trillion, according to the Investment Company Institute). Advisors are also dealing with a different and more complicated structure than that of a mutual fund.

“There’s a whole aspect of trading and execution for ETFs that a lot of advisors have never even had to think about because they’re very mutual fund-centric,” said Christian Magoon, CEO of Magoon Capital, an asset management consulting firm.

While advisors can place their mutual fund orders in the morning and get their net asset value at the end of the day, ETFs are traded throughout the day.

And unlike actively managed mutual funds, ETFs track indexes, a characteristic unfamiliar to many advisors who primarily use mutual funds.

“I think there’s a lot of uncomfortableness with how indexes work, understanding index methodology, rebalancing, reconstitution,” Magoon said. “It’s a new language. And I think there’s such a high standard when you’re investing people’s money that you don’t want to invest in something that might be difficult for you to explain or maybe ask questions that you don’t know the answer to. And I think people are in their comfort zone in mutual funds.”

And many advisors may be wary of ETFs because they’re still wedded to mutual funds that are actively managed. When asked what vehicles they would allocate client assets to, if not ETPs, a majority of advisors (44.7 percent) said actively managed mutual funds, followed by index mutual funds (25.6 percent), according to the survey.

And of course there are still a number of advisors that have strong, long-standing relationships with certain mutual funds and fund families, said Todd Rosenbluth, director of ETF research at S&P Capital IQ.

“For many advisors, trying to beat the broader benchmark is how they want to support their client or service their client,” Rosenbluth said. 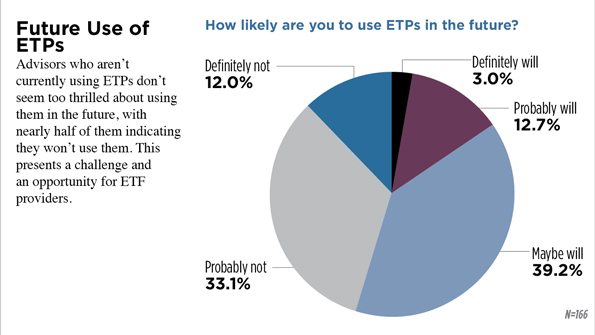 It could be that advisors believe they don’t know enough about ETPs because they don’t have the educational resources, a common complaint in the survey.

The educational effort around ETFs is still very fragmented, Keary said. Advisors don’t necessarily want to go to sponsor websites because they’re selling what they believe about ETFs, and they want more third party verification before diving in, he said. (Keary recently wrote a column for WealthManagement.com on how ETF innovation is outpacing the industry's ability to educate intermediaries and the public on their use.) 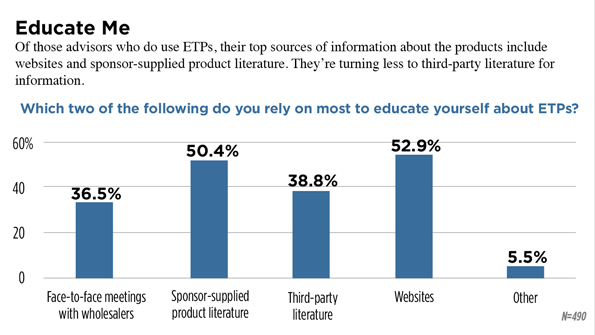 Advisors are likely going to product providers’ websites because that’s the easiest place to go and it’s free, Rosenbluth said.

“You’ve got 45 sponsors running around with their own unique set of educational resources and language and terms, and it’s not scalable,” Magoon said.

But there aren’t many third-party sources to turn to for ETP research, Magoon said. Morningstar and IndexUniverse.com are building out ratings systems specifically designed for ETFs, but they’re still new. Last fall, the Investment Company Institute, the national association for fund managers, launched an educational site on ETFs, www.UnderstandETFs.org, a good start.

But there isn’t really a centralized place to turn to for information about ETFs, IndexIQ’s Patti said.

“If you talk to many advisors and ask, ‘Where are you getting your mutual fund information from?’ ‘I’m getting it from Morningstar,’ or ‘I’m getting it from Lipper,’” Patti said. “There’s established analytical platforms that advisors have been using for 10, 15 years, and it’s really only the last 18 months or so that those are starting to become a little more used on the ETF side.”

And the average advisor is spending an inordinate amount of time with their clients, so unless they have a large team of analysts, they don’t have the time to research these products as much as they should, Patti added.

Educational materials need to cover the fundamentals: what an ETP is, how to use it and how to trade it, he said. Otherwise, if an advisor doesn’t know this, it could come back to bite them.

“An advisor trades incorrectly and they get a bad execution, and they’ll never touch it again,” Patti said.