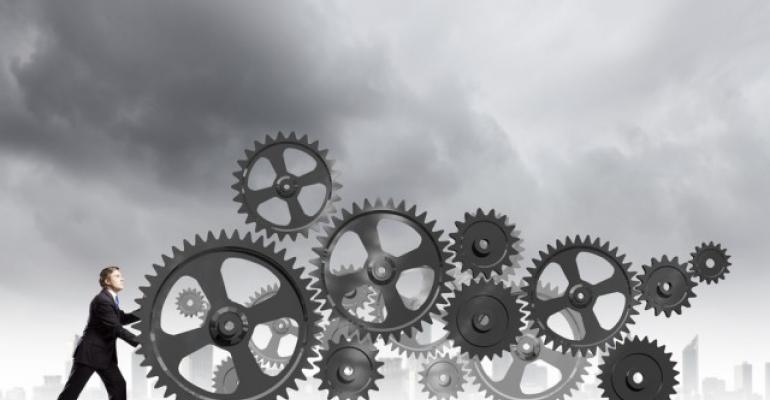 Time For Cyclicals to Spin Into Favor?

Consumer cyclical stocks have largely been taking it on the chin this year. By far, the sector has been the worst-performing sector of 2014. The largest ETF that tracks the space, the Consumer Discretionary Select Sector SPDR Fund (NYSE Arca:XLY) , is up less than half a percent year-to-date. Other sector funds in the SPDR family are up at least 4%, with sectors like energy, healthcare, and technology up over 10%.

So is this disconnect because of real factors, or have discretionary stocks simply fallen temporarily out of favor? Because the XLY has generally been a good place to be lately; if you'd owned it for the past five years, you would have outperformed the S&P 500 by over 50%, and the latter hasn't been doing too shabby.

The basic rules of the road for discretionary stocks are that you want to own them when the economy is expanding (or thought to be), and be out of them when the economy is slowing. This more than anything explains why the XLY has lagged behind so far this year - it's been real hard to determine whether the economy actually is expanding, especially after a weather-influenced plunge in 1st quarter GDP. But this morning's first peek at 2nd quarter GDP shows a strong rebound in the second quarter, with the economy tracking a 4% pace.

An important sub-metric to the GDP release is that the consumer spending portion of GDP grew at a 2.5% clip; this implies a healthier consumer than some analysts expected. And if we combine this data with the most recent 90.9 consumer confidence print - the highest reading since 2007 - we can make a pretty strong argument for expanding consumer spending to close out the year, and in so doing make a strong case for owning cyclical stocks like retailers, restaurants, and media & entertainment providers.

We call it a stockpicker's market when broad index returns are flat; i.e the only way to make money is by finding the winners and avoiding the losers. When I look at the makeup of the XLY right now, I see a stockpicker's sector - a collection of have's and have not's. I see that the third-largest holding is Amazon.com (NASDAQ:AMZN), a stock that has been under immense pressure this year. Amazon as a company I very much believe will succeed long-term, but as a stock it's one that I believe can be purchased at a lower price later this year. Analysts have finally taken Bezos & Company to task for not delivering profits after a decade of blind acceptance, and it will take 1-2 more quarters for Amazon to re-impress everyone.

Two other top-10 holdings - Twenty-First Century Fox (NASDAQ:FOXA) and Time Warner Inc (NYSE:TWX) are in the middle of a nasty takeover spat. I really don't want to be in either name right now simply because the stocks are trapped under the weight of the buyout talks; neither will move based on actual earnings or forecasts.

So now that I have a bone to pick with at least three of the top 10 holdings in the largest consumer cyclical ETF, I find myself wanting to use some individual names to get the level of sector exposure that I want. And given the strong GDP number from this morning, I want a full level of exposure, which amounts to 10-15% of my overall equity exposure.

But diversification is still the #1 priority, so I'd build the base of my cyclical holdings around an equal weight sector ETF like the Guggenheim S&P 500 Equal Weight Consumer Discretionary ETF, which has an expense ratio of 0.5% and a broad mix of over 80 holdings. No holding is over 1.5% of the RCD, so I remove some of the risks I see with funds like the XLY that hold 5% or more of Amazon, Time Warner, and Fox.

If I use the RCD to get 2/3 of my total exposure to cyclical stocks, I can supplement my sector weighting with some individual names that I feel will outperform if the U.S. economy delivers the 2-2.5% annual growth that after today seems quite likely to occur.

Even though Disney shares have been on a tear lately - up 35% in the past year - I think there's still ample room for DIS to run in an expanding economy. I continue to beat the drum on owning premium content providers, and Disney has premium content in spades. Meanwhile, management has been able to drive strong growth in operating margins despite a lukewarm consumer.

There's just a lot of operating leverage in Disney's business base right now, especially if the theme park business can surprise a bit on revenues in the second half of the year. Disney reports earnings on August 5th.

I suppose this is a contrarian pick based on how poorly BBBY shares have performed this year, down 20% after the company momentarily stopped delivering the heady top-line growth we had come to expect from them. At just 12.6x trailing earnings, this is a stock that's been on my watchlist for many years; I've been waiting for the inevitable moment when the bloom came off the rose. You can almost set your watch by the time that analysts decide en masse that a certain retailer just "doesn't have it" anymore. All of a sudden a stock that used to command a premium earnings multiple goes down to a below-market multiple, and that's where things can become interesting for value-conscious investors. Despite the recent operational pressures that Bed Bath & Beyond is facing from stagnant revenues, net margins still far exceed that of its peers, giving a much bigger cash flow punch than you'll find at most retailers.

Bed Bath & Beyond now trades for less than 13x free cash flow, the balance sheet is completely debt-free, and at these levels the stock could start popping up on some M&A radars. I'm willing to bank on the brand and geographic footprint now that I'm feeling more confident in the health of the U.S. consumer.