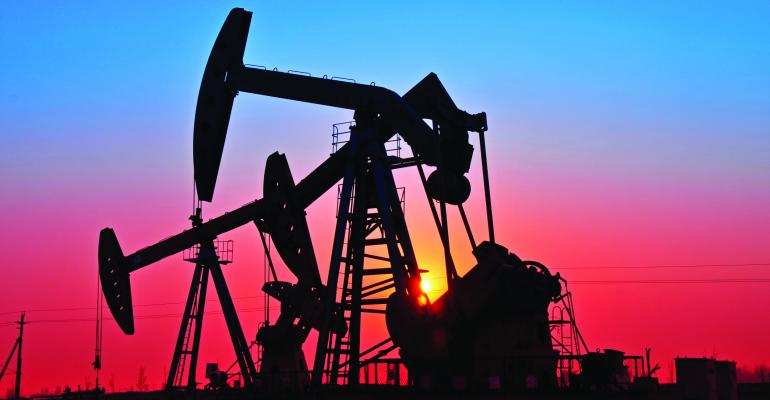 The 30 percent drop in crude oil prices this year rocked the energy sector.

Supplies are outpacing demand as U.S. shale-oil producers gush with black gold. The last time the U.S. pumped this much oil, Reagan was president. The Organization of the Petroleum Exporting Countries is also producing more than the cartel’s stated daily target.

This comes at a time when demand from Europe and Asia is tepid because of their sluggish economies. The International Energy Agency said there’s about an extra 2 million barrels of day of crude oil being pumped.

Normally OPEC steps in to support prices by curbing output, but in a salvo to shale producers, the cartel said they will let the market determine the price of oil for now.

In early December, crude-oil prices hit a five-year-plus low, with New York Mercantile Exchange West Texas Intermediate crude oil futures trading in the low $60-a-barrel area. The price weakness created knock-on effects for the energy producers and hurt the stocks of oil services and other companies with heavy ties to energy. This shakeout is likely to continue into early 2015.

“It’s a great big buying opportunity. Even though oil prices have declined so far in such a short period of time, it will take some time to recover. Oil is a good buying opportunity for a setup for 2015,” said John Person, president, NationalFutures.com. 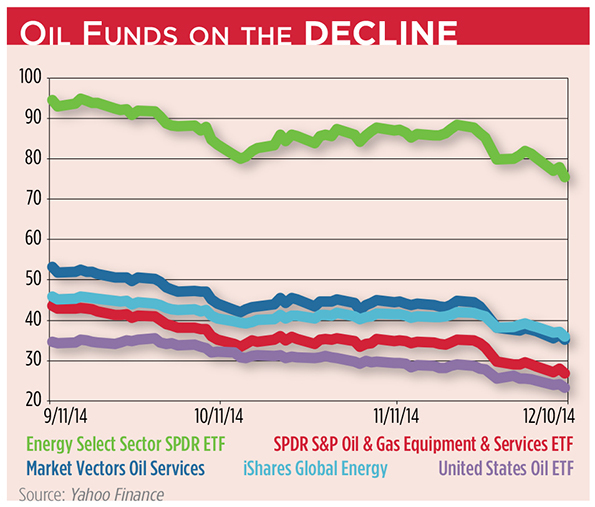 Brian Kloss, a portfolio manager at Brandywine Global, which has approximately $60 billion in assets under management, said this is the time for managers to assess their energy holdings.

“If you haven’t been invested, or if you’re underweight, start taking positions there,” he said.

Different areas of the broader energy sector were hit differently, said John Gabriel, strategist at Morningstar. The larger, integrated companies like Exxon (XOM) or Chevron (CVX) haven’t suffered as much as the equipment and service providers or the highly leveraged drillers have.

When researching individual firms, look for companies with low costs of production, so that if oil prices fall further, their margins are not as affected, Gabriel said.

Kloss said he prefers companies focused on exploration and production, rather than companies specializing in oil services—which he thinks have further room to drop.

Gabriel said the oil services area is best for aggressive money managers. The Market Vectors Oil Services (OIH) exchange traded fund is one way to get exposure. As of Dec. 5, it is down 22.4 percent. Person said another oil-services ETF is SPDR S&P Oil & Gas Equipment & Services ETF (XES), which is down 34.6 percent.

“It’s 35 percent of the integrated companies; that’s a safe play,” he said.

For exposure to multinational energy companies, iShares Global Energy (IXC) owns over half of the integrated major oil producers, including Royal Dutch Shell (RDS.B) and BP (BP), he said. The fund is down 10.6 percent year-to-date.

For a speculative play on the price of crude oil, money managers can buy either the futures contract or United States Oil ETF (USO), which is exposed to the crude oil price, Person said. That fund is down 27.6 percent this year.

“Take a longer-term view and look at the price now. Make sure you’re in the company—whether equity or debt, whatever you’re investing in—that you like what you own at these levels, because if prices go up they’re going to do really well, and if prices stay here they’ll be OK, too,” he said.