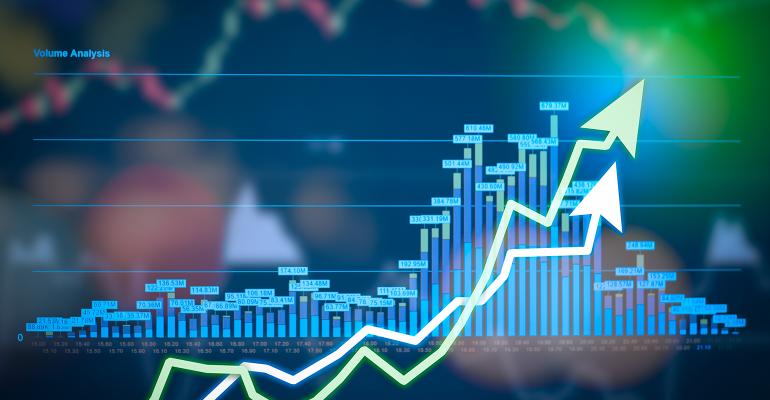 Despite the softening in the economy, growth funds have still outperformed value; but as always, it's what's inside the growth fund that matters more than its label.

ETF investors headed into 2019 making a big bet that value-style funds' time had come. $16 billion flooded into value ETFs in the fourth quarter of 2018, five times as much went into growth products.

Unfortunately for many, this directional call was incorrect - or at least ill-timed. Indeed, the iShares Russell 1000 Growth Index ETF (IWF) rose 16 percent in the first quarter of 2019, ahead of the 12 percent gain for the iShares Russell 1000 Value Index ETF (IWD). Since ETF performance will be driven by what's ahead, not from the past, we think it's worth understanding the environment for the remainder of 2019.

According to CFRA Chief Investment Strategist Sam Stovall, the U.S. has now entered a soft economic patch that may result in lower rates but avoid a recession. Action Economics (AE), CFRA's macroeconomic research partner, projects first-quarter 2019 GDP growth to come in at 1.5 percent, progressively lower than the 2.2 percent recorded in Q4 2018, the 3.4 percent seen in Q3 and 4.2 percent that was cause for rejoice in Q2 '18. The successive softening is likely due to the waning benefit from tax cuts, the government shutdown, adverse weather as well as trade tensions with China. However, CFRA is not looking for a recession to start in 2019, as none of the quarterly estimates is projected to go negative—the unofficial definition of a recession is two successive quarters of GDP decline. On the contrary, GDP growth is projected to jump by 3.2 percent in Q2 and hit 2.7 percent in Q3 and 2.4 percent in Q4.

In addition to a projected slowdown in first quarter GDP growth, according to Stovall, the S&P 500's first quarter 2019 EPS reporting period is also expected to leave much to be desired, with any catalyst for share-price appreciation likely to come from an improvement in forward guidance. Indeed, S&P Capital IQ consensus estimates now point to a 2.4 percent decline in Q1 EPS for the S&P 500, along with red ink for seven of its 11 sectors. Q1 is also forecast to be the first year-over-year decline since the four-quarter earnings recession of 2015-16. However, CFRA doesn't foresee another EPS recession in 2019, as EPS are projected to eke out a 0.7 percent gain in Q2, a near-2 percent rise in Q3, an 8.4 percent jump in Q4 and a 12.8 percent gain in 2020.

In the first quarter in 2019, value and growth ETFs both had slight outflows, approximately $1 billion each, as investors favored a blended approach including S&P 500 index-based products. CFRA discussed how investor sentiment on the macroeconomic environment impacts fund flows in a recent video with Dave Mazza, head of product at Direxion Funds.

In addition to the macroeconomic and top-down earnings picture, the winners of growth versus value will be determined by what stocks are inside the selected index funds. For example, though there is significant overlap between what's inside IWF and other large-cap growth ETFs, the funds are not identical.

CFRA independently thinks AAPL is attractively valued, trading 11 percent below our 12-month target price of $210. However, this is based on a premium P/E multiple to peers and the stock's 10-year historical average. CFRA Equity Analyst Angelo Zino expects AAPL's revenue to decline in its current fiscal year but rebound to rise 5 percent in FY 20 (Sep.). Meanwhile, earnings per share are expected to rise 14 percent in FY 20 aided by share repurchase activity.

In the first quarter of 2019, VUG's 16.8 percent total return, ahead of IWF's 16 percent and SPYG's 14.9 percent highlights the importance of looking inside these funds. Indeed, though cost remains an important metric for fund comparisons, there's just one basis point expense ratio difference between SPYG (0.04 percent) and VUG (0.05 percent) and a 16 basis points gap with IWF (0.20 percent), with stock exposure making up the rest of performance distinction.

From a flow perspective, SPYG was the most popular in the first quarter of the trio of ETFs, pulling in $928 million this year, while IWF had $1.8 billion of net outflows.

This article was originally published on MarketScope Advisor on April 1, 2019. Visit www.cfraresearch.com to gain access.