brought to you by
Investment>ETFs

Alternative funds may be more prone to performance chasing. Does a fund-of-funds approach work better?

Over the past few years, we've devoted a lot of space in these pages to the examination of alternative investments. In those checkups, we've gauged the performance of mutual funds and exchange-traded portfolios on the basis of their stated, or time-weighted, returns. That is, we assumed a buy-and-hold stance.

Alas, buy-and-hold is not a universal style subscription for investors. Money constantly moves in and out of funds, often in search of better returns. In turn, investors often receive a return that varies from a fund's published numbers. More often than not, the investor's actual return is worse than that earned with buy-and-hold.

Alts, in particular, are likely to be used opportunistically as speculative plays rather than permanent portfolio components. Partly, that's due to the narrow focus in each product. It's no wonder these funds aren't "sticky." Investor commitments tend to yo-yo as a fund's style or strategy goes in and out of favor.

Increasingly, though, investors and advisors are piecing together handfuls of diverse alts into more durable positions to complete portfolios already populated with equity and fixed income investments (we examined the portfolio impact of individual alts exposures last month in "60/40 Is Looking Tired").

Some alts ETF providers, hoping to capitalize upon the trend, are now rolling up alts exposures into multi-strategy portfolio completion packages. ProShares, for example, takes a funds-of-funds approach in its Morningstar Alternatives Solution ETF (BATS: ALTS), allocating to seven of its ETFs tracking merger arbitrage, long-short equity, managed futures and other strategies.

It's fair to ask if the assets in these roll-ups are stickier than those of a single-strategy fund. Are investors really learning to hold on to alts exposure?

To answer that question, we must compare the funds' money-weighted returns, taking into account all of the products' cash flows, i.e., creations, redemptions and dividends. Money weighting yields the return received by the funds' average investor.

And, of course, we need to know something of the funds themselves.

ALTS, launched less than two years ago, was designed to be an all-in-one alts allocation competing with multi-strategy products offered by IQ Hedge and PowerShares. Unlike its competitors, though, ALTS is passively managed. Or rather, it's mechanically managed. The ALTS portfolio is built by an optimizer that bases allocations on the component funds' trailing returns and momentum.

Presently, ALTS is made up of:

ProShares Merger ETF (BATS: MRGR), launched in 2012, tracks the S&P Merger Arbitrage Index by taking long positions in the targets of announced merger deals and going short against acquiring firms. Most of the fund's long exposure comes from direct stock purchases, augmented by swap agreements, while the entirety of its short side is populated by swaps. The fund's net exposure tilts heavily to the long side. MRGR presently accounts for 24.7 percent of ALTS' heft.

ProShares RAFI Long/Short ETF (NYSE Arca: RALS), an equity fund with a very low correlation to the broad stock market owing to its equally weighted and offsetting long and short positions, emulates the FTSE RAFI US 1000 Long/Short Total Return Index. The long side of the portfolio is populated by shares of companies with strong track records of increasing cash flows and dividends together with low stock price ratios; the short side is populated by swaps against the cap-weighted Russell 1000 Index. ALTS devotes 20.1 percent of its real estate to a RALS allocation.

ProShares Hedge Replication ETF (NYSE Arca: HDG) takes up 18.6 percent of ALTS' weight and is itself a composite exposure. Based on a Merrill Lynch model, HDG dynamically allocates to as many as six factors including T-bills, the S&P 500, the Russell 2000, MSCI EAFE, MSCI Emerging Markets and short Euro, aiming for high correlation to the HFRI Composite Index.

ALTS allocates 11.8 percent of its space to PEX.

ProShares Inflation Expectations ETFs (NYSE Arca: RINF) is a two-asset portfolio composed of long positions in Treasury Inflation-Protected Securities (TIPS) and short exposure to Treasury notes with similar maturities, replicating the Citi 30-Year TIPS (Treasury Rate-Hedged) Index. The fund aims for appreciation when Treasury yields rise relative to TIPS. Just 2.4 percent of the ALTS portfolio is given over to RINF.

ProShares DJ Brookfield Global Infrastructure ETF (NYSE Arca: TOLZ), at 2.3 percent, is the smallest allocation within ALTS. TOLZ is an index tracker made up of stocks issued by companies engaged in transportation, water delivery, toll roads and bridges.

ALTS, like many ETFs, saw its greatest asset growth immediately after its debut. From its $10 million seeding, fund assets more than doubled with net inflows of $11.6 million in the fund's first three months. The fund's largest historic inflow - $7.94 million - closed the fund's initial quarter in December 2014 as its share price gained 1.1 percent for the month. December, in fact, proved to be ALTS' high-water mark. 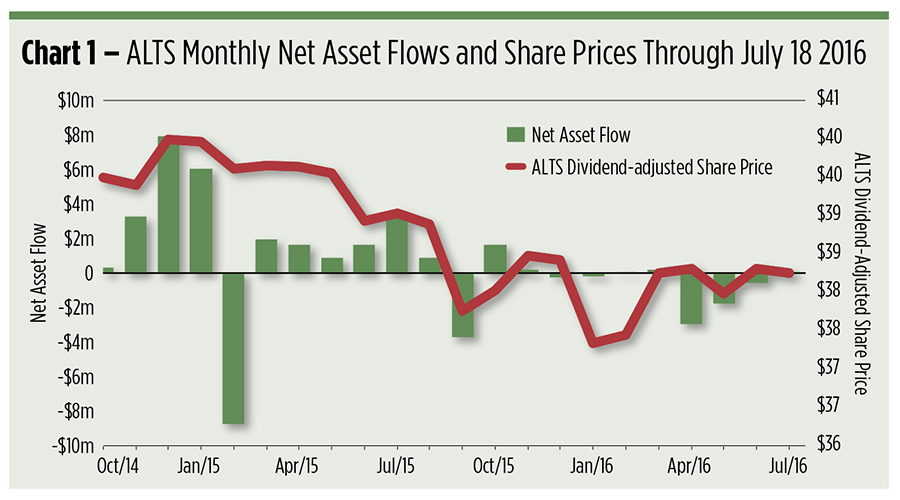 Since inception, ALTS' buy-and-hold return, counting dividends, has been –1.1 percent. Taking the asset flows into account on a money-weighted basis, the average investor actually realized a loss of 1.5 percent.

This seems to indicate that investors are better off pursuing a buy-and-hold approach; but how does it compare with one of ALTS' components?

The most mature constituent is the RALS portfolio, which has been around since 2010. Over the past two years, RALS lost 4.3 percent on a time-weighted basis compared to the 1.1 percent loss sustained by ALTS.

Does this mean RALS investors are better timers than ALTS investors? Perhaps. There was some evidence of that in February 2016 when $20.7 million flowed out of the fund during a 1.3 percent month-over-month price hike. 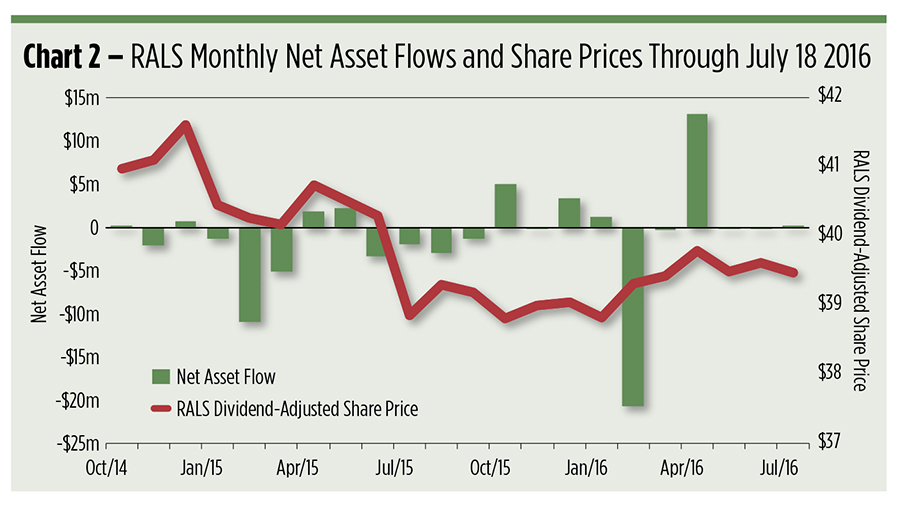 The pattern of inflows and outflows for these two funds sums it all up. In its first 22 months, ALTS lost assets seven times. Only twice was that done while its share price was rising, when selling would be considered smart. Assets flowed in 15 times; on seven of those occasions savvy buyers took advantage of a declining share price. ALTS investors, on the whole, timed their capital movements well on just nine occasions, or 41 percent of the time.

Of the nine RALS inflows, five occurred when share prices softened while six of the fund's 13 outflows coincided with share price appreciation. In toto, RALS investors were smart 50 percent of the time.

Can we say that the assets of the fund-of-funds ALTS portfolio are stickier than those of RALS? Well, if you consider the frequency of outflows, you'd have to say "yes." RALS investors are twice as likely to pull assets from their fund. But the average RALS investor gets better results for doing so. Perhaps the fund's investors, like the fund itself, are more mature. By that I mean they may have had more time to learn about their fund's ebbs and flows.

The relative novelty of ALTS may account for the performance differential in another way. Throughout the two-year period examined, RALS has enjoyed a much larger asset base. In October 2014, when ALTS' base was $10 million, the net asset value of RALS was $66 million. Large asset flows, like ALTS' $8.7 million drawdown in February 2015, are bound to have a larger impact on the money-weighted returns of a smaller fund.

It'll take at least another year for ALTS to season. It may be a good idea to check back then to see what, if anything, ALTS investors have learned about their fund.