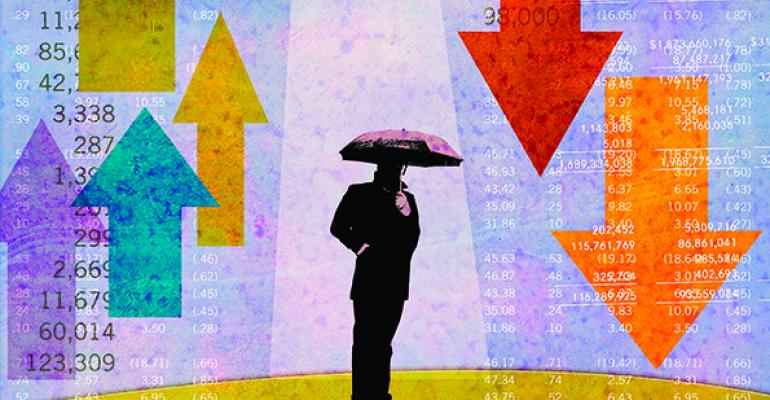 ‘Smart Beta’ Might Not Be Very Smart After All

Research suggests that factor investing’s success will be fleeting.

(Bloomberg Opinion) -- Money managers are constantly searching for a sort of Holy Grail: Some formula to offer investors superior returns while minimizing risk. Their latest effort, known as factor investing or smart beta, could be no less fleeting than its predecessors.

As any professional knows, diversification is key to reaching the best balance of risk and reward. When you invest in multiple stocks, their random ups and downs tend to cancel out, earning you the same expected return with fewer fluctuations. But there’s always some part of risk that can’t be diversified away -- for example, when the market crashes like it did in 2008, even a large portfolio won’t be safe.

Some stocks tend to hold up better in crashes. The Capital Asset Pricing Model or CAPM -- a theory that won its inventor, economist William Sharpe, the Nobel prize in 1990 -- says that these stocks command a premium in the market, which reduces their expected future returns. Thus, according to the CAPM, a stock’s expected return should be proportional to how much it tends to swing with the ups and downs of the overall market. Those that swing more -- that have higher market risk, or “beta” -- should also deliver larger returns over time.

But as Sharpe himself realized long ago, the CAPM doesn’t do a good job of predicting stock returns. Recognizing this, financial economists theorized that features other than market risk might also matter. Sifting through the data has identified hundreds, but the general consensus is that only a few are real. Two initially gained wide acceptance: book value and size. More recently, four- and even five-factor models have emerged. Asset managers have rushed to offer related investment products, sometimes under the marketing name of “smart beta.” Such “factor investing” has boomed since 2009:

The trend raises some disturbing questions. If factors like size and book value are correlated with genuine risks, why are investors stampeding to take on more? And if the factors aren’t risky -- if they actually identify stocks that, due to some market inefficiency, are undervalued -- how long will it be before the inflows of money erase the potential gains?

Risk doesn’t exist in a vacuum: In order for something to really be a risk, investors have to be afraid of it and try to avoid it. Therefore, some financial economists have reasoned, it’s possible to test which factors represent real risks by observing which ones investors seem to be afraid of. To that end, the economists Brad Barber, Xing Huang, and Terrance Odean parsed mutual-fund flows to find the factors that tended to repel investors, who usually flock into whatever fund has been performing the best. They found only one: market risk, as measured by the good old CAPM. Others didn’t seem to matter.

Various researchers have found the same startling result. A paper by Jonathan Berk and Jules van Binsbergen, used different statistical methods to reach the same conclusion -- out of all the standard risk factors, performance-chasing investors seemed to worry only about market risk. A 2017 paper by economists Vikas Agarwal, T. Clifton Green, and Honglin Ren produced a similar result for hedge funds.

If factors such as size and book value don’t scare investors away, then maybe they were never really risks. If so, the stampede of investors into ETFs and smart beta products that load up on these factors will probably reduce the factor premiums substantially in the years to come.

The studies also seem to point to other ways that investors aren’t completely rational. Remember, the CAPM does a terrible job of predicting returns. So if investors are avoiding only funds that are correlated with the market -- as the CAPM would recommend -- they are avoiding risks that just don’t matter that much. Meanwhile, Agarwal and co-authors note that investors seem eager to throw their money at hedge funds that chase factors whose performance then vanishes.

In other words, the dominant models of rational markets seem less and less capable of explaining historical stock returns or investment flows. When it comes to the question of which stocks will earn good returns and which will incur unacceptable risks, both investors and fund managers are increasingly left groping in the dark.

To contact the author of this story: Noah Smith at [email protected]