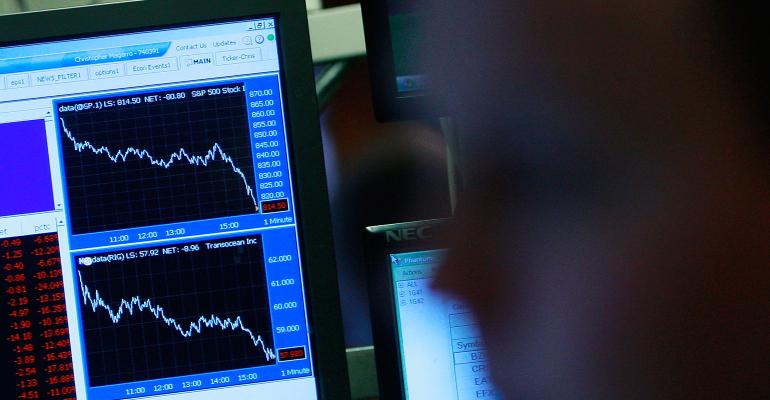 Shorting Is All the Rage for Retail Investors as Stocks Plunge

After a brutal few months, small-time traders have been trying to recoup losses by betting against the market.

(Bloomberg) -- Retail investors, who helped push stocks to all-time highs, are now trying a different tactic: Betting against the market.

From January to August this year, even before the most recent slump in stocks, the number of newly opened short positions on trading platform eToro was 61% higher than in 2021 and 41% higher than in 2020. Meanwhile, some of the biggest US exchange-traded funds that bet against popular indices are raking in record amounts of cash.

It’s quite a change in tactics for retail traders. Enticed by the sharp equity rally and bolstered by stimulus checks during the pandemic, small-time investors flocked to open trading accounts and poured cash into stocks. Now, as many flee the slumping market, others are using short positions in an attempt to claw back some of the losses of the past several months.

Connor Furlan, a 29-year-old consultant in Chicago, had never shorted anything until this year, when he noticed how inflation and the war in Europe were rattling markets.  Last year, all of his portfolio was in long positions. Now, he’s got about 50% in short positions — mostly through the ProShares Short S&P500 ETF (SH) and the Direxion Daily S&P 500 Bear 3X Shares ETF (SPXS) — combined with 25% cash in money-market funds and 25% in value-oriented equities.

“I have to be tactical now and protect myself,” he said. “There's no catalyst right now in my opinion. Everybody is scared.”

Taking a short position effectively means wagering that an asset will fall and is usually the purview of hedge funds and other big investors. For retail traders, there are a few ways to do this: Buying an inverse exchange-traded fund that gains in value when its underlying asset falls, purchasing a “put” position through an options broker or short-selling through margin trading.

It’s a risky strategy. Taking short positions can easily backfire if the asset rallies, a common occurrence in the stock market lately as wild swings rattle investors. Also, there’s often no limit to the potential downside short-sellers can face. But for those with a stomach for risk, the maneuvers can offer a sense of agency at a time when markets seem out of control.

With the Federal Reserve aggressively hiking interest rates to fight inflation and Europe’s energy crisis intensifying, along with turmoil in UK markets, there’s little for investors to be optimistic about.

The S&P 500 Index was down about 25% through the end of the third quarter, its third-worst performance at that point of the year since 1931. And while the benchmark kicked off October with its biggest two-day rally since 2020, that fizzled on Wednesday.

“The current reality for the average retail investor is far from rosy,” said Max Gokhman, chief investment officer at money manager AlphaTrAI Inc., adding that everything from the drop in crypto prices to the plunge in meme stocks like Bed Bath & Beyond Inc. is making traders bearish.

Exchange-traded funds that use leverage to short indexes have attracted $5.8 billion in new inflows so far this year as trading volumes have surged. That compares to $5.1 billion in the entirety of 2021 and $11.8 billion in all of 2020 when the coronavirus roiled economies around the world.

The most popular bearish product this year is the ProShares Short S&P500 ETF (SH), which delivers the inverse of the benchmark’s daily performance and has attracted $2 billion, already its best year of inflows on record.

Investors are also shorting traditional exchange-traded funds. The SPDR S&P 500 ETF Trust (SPY) saw the largest increase in short selling among ETFs between mid-August and late September, according to data from S3 Partners, followed by the Invesco QQQ Trust Series 1 (QQQ), which tracks the Nasdaq 100.

James Campion, a trader who goes by @campervanson on the eToro platform, is betting against the Nasdaq 100 using ETFs. His largest investment position is currently the ProShares UltraPro Short QQQ ETF, or SQQQ, which delivers three times the inverse performance each day of the tech-heavy index.

“It’s become a primary tool to generate investment returns,” said the 36-year-old, who lives in Dubai.

Other traders are choosing to bet against single stocks, which can be done through platforms like Robinhood, TD Ameritrade and eToro. Some of the most popular companies to short on eToro include Tesla Inc., Bed Bath & Beyond Inc., Alibaba Holding Group Ltd. and Nvidia Corp.

“Clients know that the economic landscape is rapidly changing,” said Dan Moczulski, a managing director for eToro in the UK. “In light of this, opening short positions has been an increasingly popular approach this year as it provides more flexibility to exploit opportunities when they arise.”

This year’s quickly shifting environment means it’s easy for short-sellers to get caught off guard. Consider how the S&P 500 lost almost 3% last week, then gained 2.6% on Monday alone and 3.1% on Tuesday. Those betting against the popular index during the rebound almost certainly lost money, and those in leveraged inverse ETFs like SQQQ lost even more.

It’s also becoming more expensive to borrow stocks to short as more people try to do so. For instance, the average cost to short Cathie Wood’s ARK ETFs was almost 5% at the end of September, up from 2.6% in mid-August.

The risks of shorting can quickly outweigh the benefits, according to Chris Zaccarelli, chief investment officer at Independent Advisor Alliance. One of the biggest dangers when trading on margin is that you can lose more than the money you initially invested, since you’re using borrowed funds.

“Shorting stocks is a difficult task, even for professionals,” Zaccarelli said. “Theoretically your potential losses are unlimited and in practice you can lose five to ten times your initial investment. I would be really careful unless you have good training and good experience doing it.”

--With assistance from Charlie Wells.