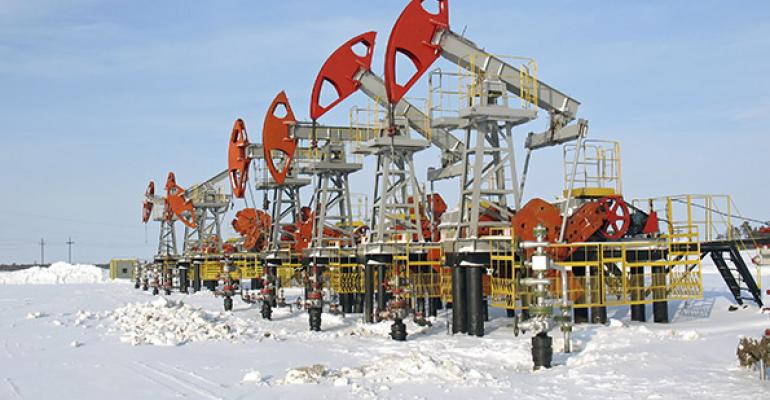 <p>The sharp drop in crude-oil prices and the possibility of more quantitative easing by the European Central Bank are just some of the issues investors will deal with across markets.</p>
Investment>ETFs

The sharp drop in energy prices will have ramifications across emerging markets. But there are bargains to be had—if you look in the right places.

After a difficult year for emerging markets and commodities, many advisors probably want to run the other way. But that could be a mistake: There are bargains to be had.

The key, say investment advisors and portfolio managers, is to take a long-term view and understand that not all emerging markets are the same, even though there’s a tendency to lump them all together. Many emerging markets are also heavy commodity producers and consumers, so it helps to keep tabs on this sector.

In 2014, the MSCI Emerging Markets Index—the benchmark index—was down 1.82 percent, while the Bloomberg Commodities Index fell 17 percent, with the sharp drop in crude-oil values responsible for much of the fall.

Portfolio managers says 2015 might not be the easiest year for investing as a whole, whether in fixed income or equities. The sharp drop in crude-oil prices and the possibility of more quantitative easing by the European Central Bank are just some of the issues investors will deal with across markets.

“There’s not going to be any free lunches. There’s going to be more volatility as global capital flow is driving markets,” says Jack McIntyre, portfolio manager and senior research analyst at Brandywine Global Investment Management, which has approximately $60 billion in assets under management.

The sharp drop in energy prices will have ramifications across emerging markets, whether it’s for producer or consuming nations. For money managers looking to invest with an eye toward energy producers, there’s only one way to proceed, says Amine Bouchentouf, managing director at Parador Capital LLC, an investment advisory firm with a focus on institutional and sovereign wealth fund investors.

“You have to look at high-cost producers versus low-cost producers. Forget about OPEC (Organization of Petroleum Exporting Countries)” versus non-OPEC, he says.

Most Middle Eastern countries like Saudi Arabia, the United Arab Emirates and Kuwait can extract oil at bargain prices and have hefty cash reserves to weather the low prices. High-cost producers include countries like Venezuela, Nigeria and Angola, who are losing money with every barrel they pump.

While yields may be attractive, avoid sovereign debt issued by the countries hurt by low oil, like Venezuela, as there’s too much risk, says Jim Barrineau, co-head of the Emerging Market Debt Relative strategy at Schroders and portfolio manager for the Emerging Markets Multi-Sector Bond Fund. Schroders globally has $447.7 billion in assets under management.

Otherwise, he says, investment-grade sovereign debt is one of the bright spots for 2015.

“The investment-grade spread from Treasurys is 260 basis points, and historically it’s 200 basis points,” Barrineau says. “You don’t have to take a tremendous amount of risk for exposure. Debt issuances will be negative in the sense that they will pay more out in interest than they issue in new debt.”

“You’re compensated fairly nicely for the level of risk because they have a significant level of foreign exchange reserves and are not spending to support the currency. We don't think they're a default candidate,” he says.

The drop in commodity prices is likely to cause lower inflation rates in some emerging markets, McIntyre says. There are some countries like Mexico, South Africa, Brazil and Indonesia where inflation is running above their respective central bank targets, he says. McIntyre expects that to change.

“We believe inflation will go below the target inflation rate because of lower energy prices, lower food prices,” he says.

Some of this may already be happening. In mid-January, India’s central bank lowered its main interest rate by 25 basis points to 7.75 percent, citing lower inflation.

Oil prices could stay low for a while, but not forever. A rebound in energy prices would bode well for cheap producers of oil.

How well emerging markets may do could in part depend on how well the U.S. economy fares, McIntyre says, especially since many emerging-market nations are exporting countries.

If the U.S. can pass “meaningful legislation” regarding improving energy infrastructure and tax reform, “it would be a big deal. If we do that, then the world economy could do very well,” he says.

Cambier is bullish on emerging markets, particularly in the long term, and sees value in picking up some core mutual funds now that the sector has been beaten up.

When choosing an emerging market fund, avoid becoming overly concentrated in one region or getting into a fund that’s too big, Cambier says.

“The thing with emerging markets is, you’ve got to be flexible,” he says.

Among his choices is Brandes Emerging Markets (BEMAX). Year-to-date through Jan. 21, the fund was up 0.74 percent. It has a 10 percent weighting in energy, and its top holdings include Brazilian food company Marfrig Global Foods and South Korean steel firm POSCO. It has a two-star rating from Morningstar.

He also likes Parametric Emerging Markets Investor (EAEMX). It has a four-star rating from Morningstar and is up 0.72 percent as of Jan. 21. Basic materials account for 11 percent of the fund’s holdings and industrials at 9.49 percent.

“It’s a ‘high-income’ type fund with selective exposure to commodity countries such as Brazil, Argentina and Indonesia,” he says.

Its biggest holding is Russian Federation sovereign debt, at 4.65 percent.

In equities, Bouchentouf selected the Neuberger Berman Emerging Markets Fund (NEMIX). This is a three-star fund and is up 1.44 percent as of Jan. 21.

“It selects best-in-class companies in key emerging markets,” Bouchentouf says. “It’s currently overweight Asia which is a positive secular growth story for 2015. As far as emerging market equity funds, this is as ‘steady Eddie’ as it gets.”