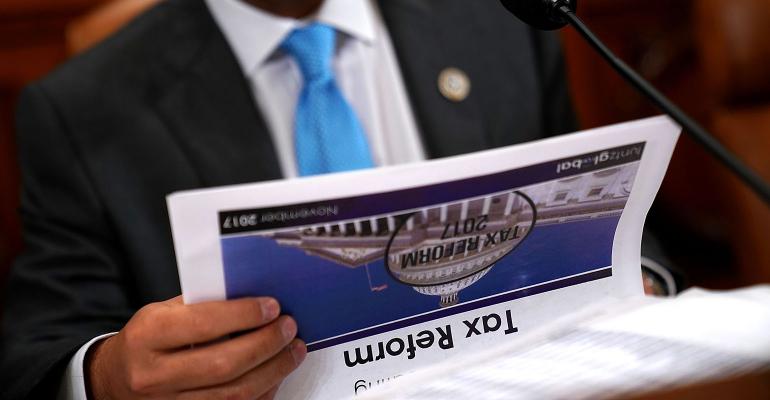 Not Everyone Loves These ETFs That Come With a Political Opinion

(Bloomberg) --Money managers have already tried to sell people exchange-traded funds linked to booze and over-eating. So it probably shouldn’t come as a shock that they’re moving on to an even touchier region of the American psyche -- politics.

Believe it or not, not everyone thinks it’s a great idea.

Funds from the same manager purport to give exposure to political and policy-driven ideas. The actively managed EventShares Republican Policies Fund, ticker GOP, and EventShares Democratic Policies Fund, symbol DEMS, employ hedge-fund like strategies by going long companies that may benefit from party policies and shorting those that could be hurt.

“We believe that policy can drive market returns, particularly in politically sensitive times such as today,” Phillips said.

Sponsors can bill an ETF however they want, back test the results, and see how it behaves in various scenarios. They may even convince people to buy them. At the same time, the bar to proving such products work as advertised is pretty high. Getting even a rough sense of how governments influence share prices is a task fraught with peril, as anyone who shorted British companies since the Brexit vote can attest.

“Aligning yourself with one of these causes because you think it’s going to outperform is a fool’s errand,” said Dana D’Auria, director of research at Symmetry Partners LLC, which oversees more than $8.5 billion. “We live in a time where people can leverage their investments to make a statement. Just make sure you’re well diversified because the hit you potentially take for this choice is worse than you might think.”

The GOP ETF is focused on defense and border protection, deregulation, infrastructure, U.S. energy independence and also has a bucket for tax reform. It owns companies like Cheniere Energy Inc., a U.S. natural gas transporter, because Phillips thinks they’ll benefit from potentially less stringent regulation on energy and transportation. The fund may short Kansas City Southern, a company that gets half its revenue from Mexico and whose stock plunged 11 percent the day after Trump won.

These ETFs differ from the first politically themed fund, which started trading in September. Known by its ticker MAGA, the passively managed Point Bridge GOP Stock Tracker ETF follows companies whose employees and PACs are highly supportive of Republican candidates. The strategy appears to be working, as buyers poured more than $30 million into the fund in the first six weeks.

“We are doing something very different than a new competitor out there that’s passively managed and rebalancing every two years,” Phillips said. “And we’re not limiting ourselves to large, often correlated names like the S&P 500 constituents.”

For the brave buyers who claimed stakes in TAXR close to its launch, it seems to have paid off so far. The fund has outperformed MAGA and the S&P 500 Index, according to Bloomberg data. Still, others think the whole idea’s a bit of a stretch. Investors have to first make a policy call and from there assume that the portfolio they’ve chosen will directly benefit from that policy outcome, according to Ben Johnson, director of global ETF research at Morningstar Inc.

Throughout its history, the ETF industry has occasionally found itself walking a fine line between what customers want and what they need. It doesn’t take a leveraged volatility note or Make America Great Again ETF to raise the question about whether all the concepts sold under the academic rubric of “smart beta” belong in every investor’s portfolio.

“I don’t think it makes sense to mix your politics with your investment policy,” Johnson said. “What you see here is a marketing gimmick at the end of the day, it’s nothing that has real lasting investing merit.”

The “lasting merit” of a tax reform ETF may be worth considering with an overhaul on the verge of passing. What then? Does the new legislation create alpha for a month, a year, a decade? Event Shares’s Phillips says all of the above, as even Obamacare continues to be relevant today.

Still, if an ETF makes it past the robust regulatory review and is approved, it should get a chance to prove itself, said Reggie Browne, senior managing director at Cantor Fitzgerald.

“These new ETFs will prosper or wilt based on consumer demand,” Browne said. “The forces of free markets will prevail.”