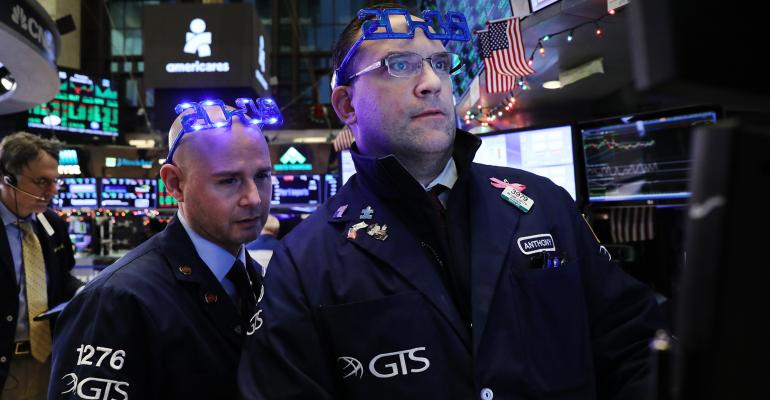 Looking Back at a Strong 2018 for ETFs

Rather than just chasing performance, fund flows demonstrate investors are increasingly finding comfort in the lower-cost and index-based approach.

Though the $313 billion of net inflows for the exchange traded funds industry in 2018 was down from the $466 billion a year earlier, CFRA thinks the cash haul was impressive as most major market indexes tracked by these funds were flat or down. Rather than just chasing strong performance, investors have increasingly gained comfort in the typically lower-cost and index-based ETF approach.

Tactical investors put $14 billion into sector-focused ETFs last year, with information technology and health care leading the way. The 2,400-basis point spread between the best and worst performing of the S&P 500 sectors highlights the benefits of getting those calls right. Health Care Select Sector SPDR (XLV) rose 6 percent, easily outperforming the 18 percent decline for the Energy Select Sector SPDR (XLE). As a group, energy ETFs had only approximately $150 million of net inflows.

While the gap between health care and energy might seem wide, according to Sam Stovall, chief investment strategist at CFRA, since 1970 the average difference between the returns for the best and worst S&P 500 sectors was 4,100 basis points. In the year after recording a below-average differential, the S&P 500 posted a positive full-year total return 91 percent of the time. Stovall suggests that history indicates this could help 2019 be a year back in the black for the well-known U.S. benchmark. (Of course, past performance is not a reliable indicator of future results.)

Outside of the U.S., demand for well-diversified, low-cost ETFs remained strong even though the losses were sizable. iShares Core MSCI EAFE (IEFA) and iShares Core MSCI Emerging Markets (IEMG) added a combined $36 billion of new money. Yet the developed markets of IEFA lost 14 percent in value and its emerging market iShares sibling declined 15 percent. Though the returns were similar for Vanguard’s international equity duo in 2018, interestingly the flows were different. Vanguard FTSE Developed Markets ETF (VEA) pulled in $9 billion new money, nearly half of IEFA, but Vanguard FTSE Emerging Markets (VWO) had $273 million of net outflows. Despite similar names, investors should be mindful that VWO has no exposure to South Korean equities, while IEMG has a 14 percent weighting in this country.

To CFRA, the biggest ETF flows trend was in fixed income, which pulled in $97 billion of new money in 2018, equal to a 31 percent share of net inflows, even as the Federal Reserve raised interest rates multiple times. While ETFs remain known for tracking indexes such as Bloomberg Barclays Aggregate Bond Index, which was flat in 2018, actively managed fixed income ETFs gathered $21 billion of new money. This was equal to the total inflows for the investment approach between 2015 and 2017.

As a group, government bond ETFs were the top asset gatherers with $55 billion, led by iShares Short Treasury ETF (SHV), which has duration of less than half a year and attracted $13 billion in inflows in 2018.

For perspective, according to Bloomberg, mutual funds had $98 billion of net outflows as of Nov. 2018, with most of the bleeding occurring in equity mutual funds. As 2019 kicks off, we think investors will continue to seek out ETFs to serve both their asset allocation and more tactical needs.

I’ll be joined by Sam Stovall and CFRA Investment Strategist Lindsey Bell for a 2019 Outlook webinar on Wednesday Jan. 9 at 11 a.m. ET. To register, visit https://t.co/pAYL1kTgYY.